Despite the rain, wind and cool temperatures, almost 300 runners showed up at Whistler Olympic Park on Sunday, Sept.
Oct 2, 2013 9:00 PM By: Andrew Mitchell 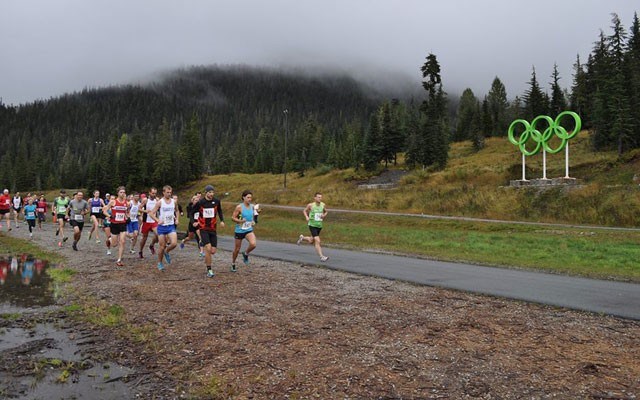 Despite the rain, wind and cool temperatures, almost 300 runners showed up at Whistler Olympic Park on Sunday, Sept. 29, for the annual Whistler Spirit Run — a classic cross-country event that includes elementary and high school categories, as well as university and open events.

On the men's side, Chris Winter was the top runner once again with a time of 26:14.31 on an 8km course. Winter is a member of the national steeplechase team, and is looking to earn a spot to compete for Canada at the Olympic Games in Rio in 2016. He was 14th at the IAAF World Championships in August, and in the Edmonton International Track Classic in July he placed fifth overall.

Kevin O'Connor was second in the Whistler Spirit Run in 27:09.64, followed by Ian Searle.

With the forecast calling for significant snowfall and high winds in the high alpine, Escape Route has postponed the 28th annual running of the 24km Rubble Creek Classic trail run. The race takes runners into the alpine on the Helm Creek trail, crossing the cinder flats behind Black Tusk and connecting to trails in the Taylor Meadows that bring runners to the Rubble Creek descent. Roughly seven kilometres of the course is above the treeline, and there's an active creek to cross in the middle of the cinder flats.

The race will instead run this Sunday, Oct. 6; with the same start time and details, providing the conditions are safe. Organizers will give refunds to anyone not able to do the event.

The sign-in is from 7 a.m. to 8 a.m. at the Cheakamus Lake Trail parking lot, and there's a soft start for runners expecting to take over four hours at 7:30 a.m. It's not a loop race, and runners do need to arrange transportation to the start and from the finish line.

The race has sold out all 80 spots, but more spots may come available. Visit en.escaperoute.ca/events/RubbleCreek/ for details.

The final event of the North American Enduro Series was a five-stage event in Moab, Utah. A few Whistler riders headed to the event, including Dylan Wolsky and Katrina Strand. Wolsky finished the event ranked 10th out of close to 50 riders in the pro men's division, logging a total time of 1:32:51. His Nomads teammate Chris Johnston had a great race and finished fifth overall.

Katrina Strand, who missed the Enduro World Series race in Whistler with an injury, was back in the saddle for this event and placed seventh in Pro Women in a time of 1:54:48.

Last week's coverage of the 2013 edition of Ryder Hesjedal's Tour de Victoria was missing several names, with the official results pages not including hometowns.

Mike Rogerson finished 74th overall in 4:26:06, and was the second Whistler athlete in the event.

Elizabeth Rogerson also finished the race in 6:03:36, and was the top Whistler racer. Pique also neglected to mention that she raced the RBC GranFondo Whistler two weeks before the Tour de Victoria, and was the second Whistler female in the 40 to 49 category in 4:51.

Mike Rogerson said he had a few low points on course — including a crash on an oil patch at the 93km mark that damaged his front derailleur and left him with only his big ring for the last almost 50km of riding — and a lot of short, steep hills. However, he had some high points as well, including latching onto 2012 Giro d'Italia winner Hesjedal for about 10km.

"Luke (Onesti) and I jumped right onto his wheel and into his slipstream, which was a real thrill and a short mental respite from the conditions — particularly the wall of water being sprayed in our faces."

The Whistler Saints flag football team is now on top of the North Shore Football League rankings after winning its last game against the North Vancouver Hawks.

Josh McKenzie opened the scoring after a 40-yard punt return, with Beynon McKeen scoring twice in the second half and Logan Anderson adding two points on the conversions to put the Saints up 20-6.The team is now 4-0 on the season.

The Meadow Park Sports Centre is offering Whistler residents a chance to get into shape this winter at no extra cost.

The "Turkey to Turkey" promotion runs 11 weeks, Thanksgiving to Christmas Eve, allowing participants to take part in free fitness and cardio classes, and earn points for themselves. Participants get one point for participating in any fitness class, completing weekly fitness challenges in the weight room, doing 30 minutes of cardio or more in the cardio room, doing 45 minutes of strength or flexibility training, doing a 30 minute HIT (High Intensity Training) session on their own time, swimming for 30 minutes, or playing drop-in hockey or squash.

Two points are awarded for taking in a "new to you" fitness class for the first time, or doing a one hour personal training session.

Every 10 points earns an athlete one star and an entry in the prize draw.

Serwa back on snow

Canada's ski cross team has lost a lot of key athletes in recent years, including Olympic champion Ashleigh McIvor and Julia Murray to knee injuries. The good news for this year is that Kelsey Serwa, battling a recurring knee injury of her own, should be ready to compete by the time the Olympics roll around.

The team brought Serwa, the 2011 world champion and a 15-time World Cup podium finisher, to SnowWorld in Landgraaf, Netherlands, the largest indoor ski facility in the world, to give her a chance to try her knee on the snow.

"My knee felt normal," she reported. "I was probably a little rusty, just in terms of balance, but it only takes a few runs to get it back."

Despite the tentative nature of her first on-snow session, Serwa's goals are to get back into form, and back on the podium, as quickly as possible.