The Whistler Minor Hockey Association is entering the post-season on a roll with four teams bringing home banners this season.
Feb 22, 2012 8:00 PM By: Andrew Mitchell 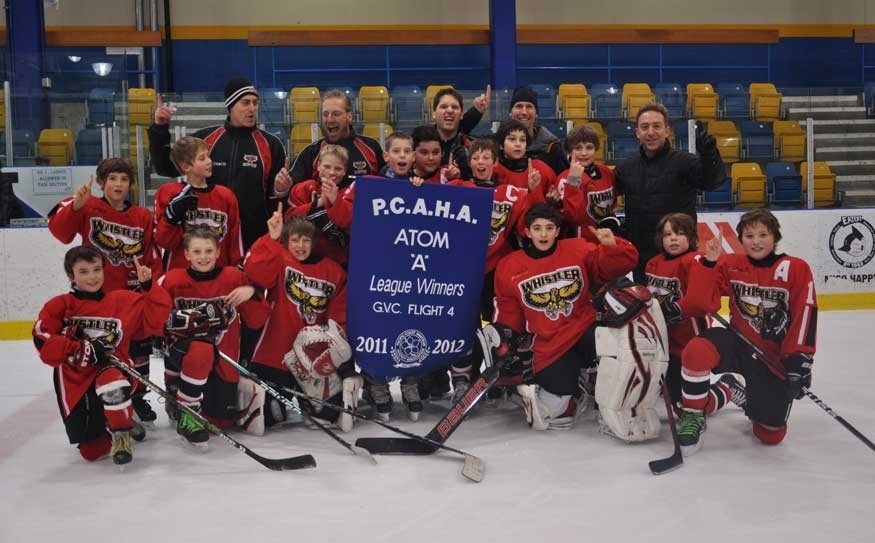 The Whistler Minor Hockey Association is entering the post-season on a roll with four teams bringing home banners this season.

The most recent banner was courtesy the Winterhawks Atom A1 team, playing in the Pacific Coast Amateur Hockey Association's Flight 4. The team finished with a record of 17 wins and just three losses while outscoring their opponents 109-51 over 20 regular season games. That's more than five goal each game.

The Peewee A1 team, competing in Flight 3, also finished on top of the standings with 15 wins, three losses and two ties. They outscored their opponents 86 to 26 in 20 games, averaging 4.4 goals per game.

The Bantam A1 team also finished with a record of 15-3-2 over 20 games, placing first in Flight 4. They outscored their opponents 129 to 69, averaging 8.8 goals per game. They also had the second fewest penalty minutes of the 10 teams in their group.

The third and final slopestyle of the Telus Park Rider Sessions took place on Sunday in the Blackcomb Terrain Park.

In the Snowboard Men 17-Plus, Joey Eddy was the top rider with a score of 290, nine more than Filipo Maquignaz. Marc Landry was third with 274.

In Ski Men 17-Plus, Reed Lewis took the win with a 361, the highest score of the day, followed by Oli Cain with 327 and Bauston Camilleri with 268.

In Ski Male 13 and Under Luke Smart placed first with a 322, followed by Bracken Camilleri with a 246 and Carter Krasny with a 104.

The last event on the calendar is a halfpipe on Blackcomb, taking place on Mar. 11. That event is sanctioned by the Association of Freeskiing Professionals (AFP), with an opportunity to earn points and gain entry to pro events. To earn points you must be an AFP member, and online registration is available at www.afpworldtour.com.

Registration for the halfpipe contest itself is available at Whistler Blackcomb Guest Relations or online for $29, going up to $35 on the day of the event. Competition day registration is available at the Rendezvous Lodge until 9:45 a.m.

Competitors must wear helmets and mouthguards are recommended. As well, minors need a waiver signed by a parent or guardian.

The World Cup bobsleigh and skeleton season wrapped up last weekend at Lake Placid, with the Canadian team winning two medals at the world championship.

In women's bobsleigh, Kaillie Humphries and Jenny Ciochetti won the championship title with four solid runs down the track.

"It feels amazing," said Humphries, the reigning Olympic champion. "This means a lot to me. I feel like I'm still growing as a pilot and I try to learn from every experience. I've been working on my consistency and I'm glad it showed here."

Helen Upperton and Shelley-Ann Brown finished fifth, just a few tenths of a second back of the top three.

In the men's two-man bobsleigh, Lyndon Rush and Jesse Lumsden placed second. They were in the lead after the first two runs, but Rush came down with a stomach virus and they lost the lead.

"Coming down the track was awful," said Rush. "I was gagging the whole way down. Thankfully the run is only a minute long.

"Jesse pushed the sled by himself today. I was basically a windsock. He was on his own."

The championships continue this week with skeleton and four-man bobsleigh races.

Squamish long distance athlete Jen Segger kicked off the 2012 season with a strong finish at the Vibram Hong Kong 100, a 100km trail race in the mountains outside the city.

It was a tough race with high humidity and paved trails that Segger had trouble descending after injuring her achilles tendon last year.

Segger led for the first 30km, but was caught by local runner Claire Price at the 30km mark, and then Nor Senn just before the 70km mark.

At around 80km they were harangued by hungry monkeys. Locals feed them, and they wanted Segger's power bar.

"I had to laugh as I had been warned about the greedy little monkeys," wrote Segger in her race report.

Segger reached the finish line in 13 hours and one minute, third among women. She was hoping for a better finish, but was able to put it into perspective.

"It was the first race of the year after six weeks of training," she wrote. "I felt as ready as I could be for a February race and I learned a lot about where I need to focus my training on moving forward. With Ireland 100km just around the corner (in March) I will have to work even harder."

Segger said she was unprepared for the paved trails and all the stairs on the route. If she had a chance to do it again she would have brought poles for the last 50km to help with the stairs.

A blanket of fresh snow greeted the almost 70 snowshoers that turned out to The Yeti race at Whistler Olympic Park on the weekend.