Sports Briefs: Pemberton area full of events to check out on long weekend
May 14, 2014 10:00 PM By: Eric MacKenzie 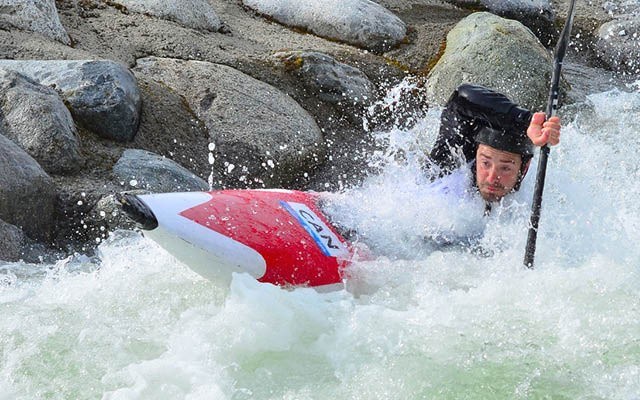 kayak course open Ben Hayward trains at the Rutherford Whitewater Park earlier this week as he prepares for the CanoeKayak Canada national team trials, taking place May 17 and 18 at the facility. photo by Rob fletcher / courtesy of rfort fotos

GO Fest will keep Whistler busy over the long weekend, May 16 to 18, but there will be plenty of sporting events to check out in the Pemberton area, too:

• The water has been turned on this week at the Rutherford Whitewater Park, as CanoeKayak Canada is holding its national team trials at the seldom-used facility.

Male and female K1 and C1 athletes have been training on the slalom course since May 11, gearing up for selection races going Saturday and Sunday. The results will decide who represents Canada on the World Cup circuit for the 2014 season.

There will be four races in total, starting at 11 a.m. and 12:30 p.m. at the park, located between Whistler and Pemberton on Highway 99.

• Right on the heels of Friday's GO Enduro, the second race of the Sea to Sky Enduro Series is happening Saturday in Pemberton. More than 150 riders came out to the series opener in Squamish two weeks ago, and with races on back-to-back days, the Pemberton stop should get close to the 200-person cap on the field.

Stages are being planned for the One Mile Lake and Mackenzie trails, with a car transition between the two areas permitted. The race gets started at the lake at 11 a.m. Registration is open at www.worca.com

• The annual Lillooet Lake Rodeo returns for three days of family fun in Mount Currie, Saturday through Monday. Saturday's schedule features a number of novice rodeo events open to all, plus a parade at 11 a.m.

Sunday and Monday is reserved for professionals, as the Lil'wat Nation hosts the next stop on the Western Indian Rodeo and Exhibition Association's season tour. Thousands in cash prizes will be up for grabs as competition takes place in bull riding, barrel racing, roping, steer wrestling and more. Events begin at noon each day. Children get in free and all are welcome.

• The Pemberton Speedway sees its first event of the season this weekend during the Test & Tune Grudge Match. Action gets underway at noon on Saturday and 11 a.m. on Sunday. Children and seniors get in free at the track, located off Highway 99 between Whistler and Pemberton.

More than 200 athletes aged four to 15 took part in the Squamish Youth Triathlon on Sunday, May 11, with many local athletes swimming, biking and running to great results.

Whistler's Kaila Lafreniere beat all the boys and relay teams, too, to win the 10-11 division, completing the course (150 m, 4.5 km, 2 km) in 25:53.9. Matthias Shorter was one minute back in taking the boys' title, and The Shredders from Squamish won the relay.

In 7-and-under competition, the top finishers were Keanu Kaessler for the boys, Arya Schoahs for the girls, and The Red Bull in the team event.

Visit www.webscorer.com to view the full list of results

The Whistler Outdoor Volleyball Association is expanding once again as the kickoff of another beach league season draws near.

Wednesday nights at Rainbow Park will now feature 3-on-3 intermediate co-ed play, as the Thursday night 3-on-3 league has become popular enough for WOVA to add another day.

With recreational 4-on-4 play slotted for Mondays and Fridays again this year, and the 2-on-2 competitive division returning on Tuesdays, WOVA will be occupying the courts five days a week for regular league play, running June 16 to Sept. 12.

The WOVA preseason mixer will be taking place on May 26 at 6 p.m. Returning teams can take advantage of priority registration at the mixer, while players looking to join, or assemble, a team can meet up at the event. Open registration will take place June 2 at 6 p.m.

The location for the two events will be announced at www.wova.ca and on the league's Facebook page, but you can bet it will be at a Gibbons Hospitality Group establishment, as they've partnered with WOVA for the 2014 season.

The Whistler Secondary School Storm track and field team has spent the past few weeks competing in zone qualifying meets, the first step on the road to the provincial championships.

The Whistler team is 30 athletes strong this year and many have posted great results to earn a spot at the North Shore-Howe Sound Zone Championships, set for May 22 at Swangard Stadium in Burnaby.

In some highlights from the track for Whistler athletes to date, Grade 9 student Arnica Wight ran blistering sprint times, including a 13.2 in the 100 metres, to qualify first for the zone among all juniors (Grade 9 and 10). Wight also qualified in the long jump and high jump.

Meanwhile, German international student Yannik Gerland has been impressive in senior boys' (Grade 11 and 12) middle- and long-distance events, qualifying in the 800, 1,500 and 3,000 with top-two times.

The team's Grade 8 contingent will be large at the zone finals as well. Zach Welton posted the top 100-metre boys' time, a 12.5, also advanced in the 200. Jacqueline Perolli was the fastest girls' 100-metre runner in qualifiers, while Hannah Peatfield moved on with top-three times in the 200 and 400.

More Whistler athletes were expected to advance to the zone championships in throwing events this week as well.

The top-three finishers in each event at the zone finals qualify to the B.C. Championships, taking place May 29 to 31. Grade 8 athletes can also attend the provincial meet on an invitational basis.