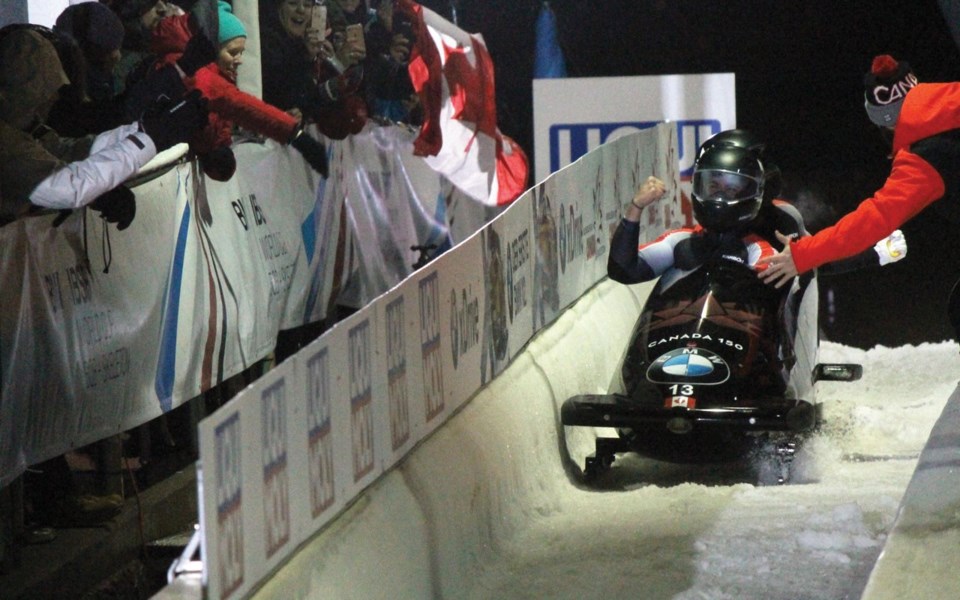 Celebrating victory Chris Spring is shown celebrating a win with Neville Wright at Whistler Sliding Centre in 2017. This year, the veteran pilot is leading a new crew on the North American Cup circuit. File photo by Dan Falloon

Canada's bobsleigh teams are in a state of flux just months after the 2018 Winter Olympic Games.

However, while the 2018-19 season is one of transition, pilot Chris Spring is feeling optimistic for what Canada could present at the 2022 Games in Beijing, China at the conclusion of this quadrennial.

A season after he took 10th in two-man at the 2018 PyeongChang Games, Spring has spent this season on the North American Cup (NAC) circuit after the bulk of Canada's brakemen didn't return for this season. That's meant that Spring, who has a pair of BMW IBSF victories to his name, has an entirely new, less-experienced crew for this season.

"This year's been particularly tough, not just for us and Canadians, but for a lot of different teams," he said. "It's difficult after an Olympic Games to retain a lot of athletes in the sport. A lot of that is due to the nature of the sport, being away from family and friends for so long. Generally, we leave first week of October and aside from a 10-day break at Christmas, we're gone until mid-March."

It's especially challenging, Spring said, that many of the athletes have partners and children, as well as careers. While some of the brakemen may be done for good, Spring said many are talented enough that they'll be able to step back in a year or two before the Games and be competitive.

"A lot of athletes are smart people and are leaving behind well-paying jobs to compete for Canada for little to no money at all," he said. "After an Olympic Games, a lot of athletes say 'It's time for me to be a father or a mother more and provide for my family.'"

While understandable, Spring acknowledged that it is heartbreaking to see Canada going young in a World Championships season, especially as the sport's second-biggest stage is coming here to Whistler in March.

"It's disappointing to see, especially when we have World Championships at home, and last year, (Olympic two-man champion) Justin (Kripps) and I went 1-2 in the two-man race here. We have the ability to be World Champions," he said. "To go into the race knowing that we have amazing athletes at home that unfortunately aren't going to be part of the team this year—I know that we'll still have a good chance with the athletes we have—but it's tough to know, especially in four-man, that we're leaving a lot behind."

So far, Spring has slid with athletes who are, at most, in their second competitive season. The results have been a mixed bag, as some of the early four-man races have seen the team place near the back of the pack. However, in the final races before Christmas, Spring took three of four wins at Lake Placid, including both two-man races.

The 34-year-old reasoned that spending a season teaching the newcomers the lay of the land on the NAC tour is best for the young athletes' long-term development.

"To put them on the World Cup straight away was definitely not going to be advantageous for us, so we just decided to stay back and do the North American Cup circuit, trying to get some points that way and also develop these athletes so that when they do reach the world stage, they're not overwhelmed by that," he said. "You don't want to go and do some World Cup races and not be competitive, right?"

That said, Spring and his motley crew haven't ruled out trying their luck on the top loop this season, though many of them are battling injury at this point in the campaign.

Spring explained that while his teammates are growing, he's also learning a lot about operating with all eyes on him as the team role model.

"I have to remind myself that the athletes that are coming in are not the veterans that I'm used to having on my team," he said. "There's a lot more responsibility and work on my side of things. I can't just leave my focus on driving and being a better athlete myself; I also have to help these guys out and make sure that they're taken care of as well.

"It's definitely a different approach, but it's had its rewards as well."

Spring's most common brakeman this season has been Darren Lundrigan, a second-year competitor who is looking to make the most of the opportunity that he's been given.

Lundrigan worked with two other young pilots last season, but the Brudenell, PEI product is thrilled to be under Spring's tutelage this year.

"He's obviously a skilled pilot, so it just makes the rides a lot easier. He's an easy guy to slide for," Lundrigan said. "When you're in a tough sport, it's great to have a guy like that, with an easygoing personality. He's always got your back."

Lundrigan explained that he and Spring work well together and ensure that each attempt means something.

"Every time we're going down the track, he'll ask me what my goal is for that run, what you want to work on. He'll tell me what he wants to work on," Lundrigan said.

Lundrigan first became a bobsledder through the RBC Training Ground program, which looks to identify potential Olympians who have backgrounds in other sports. Lundrigan had formerly participated in track, rugby and soccer when he opted to give the program a shot.

"I had never thought about doing bobsleigh before. It's not really one of those sports that you seek out," he said. "When they asked me if I'd like to try it, I figured I might as well give it a go. It seemed like an exciting sport and I got to like it."

Before this season, Lundrigan had finished no higher than sixth, but after teaming with Spring, he now has six medals to his name. The first victory, a two-man win at Lake Placid on Nov. 30, was memorable for him.

"It was really cool to be able to stand on the podium with your friend and have them raise the flag for you," he said.