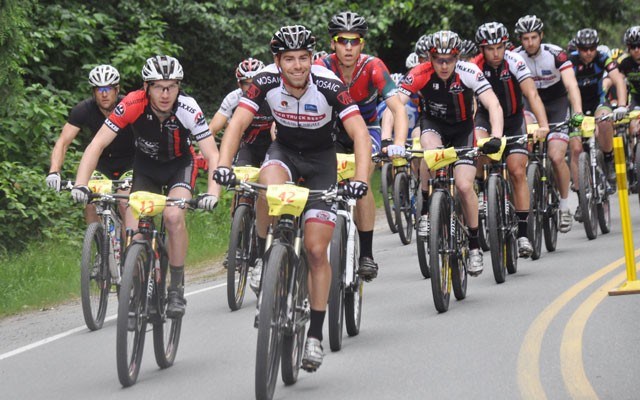 passing the test Riders are shown at the 2014 Test of Metal. This year's event marks its 20th anniversary. File photo by Ben lypka/squamish chief

Paul Craig has an extreme dedication to the Test of Metal race.

Though he has an attitude of "if it has two wheels, I'll race it" and competes in everything from crits to stage races locally and internationally, he's never missed a Test in the event's 20-year history in Squamish.

Reached in Singapore — in the middle of the night, no less — on Tuesday morning, Craig was more than willing to spend a few minutes chatting about a race that's near and dear to his heart. Though he's travelling in Asia this week, returning Thursday, the Pitt Meadows resident will be lined up Saturday morning for the 20th edition of the race.

"I'll do anything to get back home to do the Test," he pledged. "If I've come to southeast Asia for two days and I have to rush back to do the Test of Metal, then that's what I'll do."

Craig's wife, Susan Weston, is also a veteran of every race even though she was particularly challenged for the inaugural one.

"She was on a fully rigid bike with no suspension," he said, noting Weston still finished third in her category. "I remember her finishing pretty much in tears because of how harsh the ride was — (she did) the entire race on a bike with no front shock. The rest of us were riding bikes with very minimal suspension anyways, that being 20 years ago, but she rode it with no suspension so she was pretty upset with me at the time."

Craig noted she bought a new bike the following year and has powered through ever since. The tears eventually dry up. The muscles recover. And the positive feelings remain.

"Anytime you do something tough like the Test of Metal back in the early days, once you've done it, a day or two afterwards you might be saying to yourself 'I'm never going to do it again,'" he said, "but within a week, you start thinking about the good things and the fun that you had and the people that you met. The suffering kind of fades to the background and your passion for the sport boils to the top."

The race has a pre-1996 history, originally starting out in Roberts Creek before opting to move to trails around Squamish's Alice Lake. Sunshine Coast resident Glen Illingworth is the only rider to race all five of the previous incarnations of the event when it was known as the Brodie Test of Metal. The race was started by Paul Brodie before being revived by Cliff Miller and Kevin McLane in 1996. Five years ago, at his 20th Test of Metal, Illingworth was honoured with lifetime free admission to the event and doesn't ever have to worry about registration when it opens, a bonus since registration is during winter holidays.

"I don't have to go through the rigmarole of the computer thing to get in that sucker. I'm automatically in every year," he said. "That's one of the best gifts anyone ever gave me."

Illingworth has not only participated in, but also completed, every race, and is grateful for the factors that have allowed him to do so. Only once was there doubt, he said, when it appeared to just not be his day when he had borrowed a bike after recently selling his own.

"Less than 15 minutes into the race, I was coming down the first set of gravel road where you descend into Jack's Trail and I got a flat. Because it was the very start of the race, I no sooner pulled over and started to assess my situation when the last guy in the race passed me," he said.

The tube Illingworth had with him had a damaged valve stem, rendering it unusable, while the backup he packed was for a road bike.

"What I did was I ran up the trail forward into the race and I started looking for anybody that had had a flat that had discarded a tube," he recalled. "I found one that had a hole in it, so I patched the tube that I had found.

"I got back to my bike, fixed it, go to use my pump and the pump's not working. The sweep actually passed me his pump."

From there, Illingworth got back in the race, estimating he passed 400 riders when he returned to the pack.

Way back in 1996, the brand-new Test of Metal course was a sight unseen for most, if not all, of its riders.

Stewart Kerr recalled that first day with fond memories, enjoying the experience of taking it all in for the first time in a competitive setting.

"It opened maybe a week before the race, so you hadn't pre-ridden the whole course."

It's a feeling that's been rare for riders since, though, as organizers have striven for consistency, making only minor alterations to the course in subsequent years out of necessity.

Miller said riders appreciate the race's consistency, as the course has remained in place throughout the history.

"It's been pretty much exactly the same thing as the last 20 years," Miller said.

Roughly 450 riders came to the first race, and it quickly became a favourite on riders' calendars. It quickly increased to the current cap of 800, and sells out quickly — including one year in 24 minutes, Miller recalled. Now, things have simmered a touch, reaching capacity in a less feverish day-and-a-half.

Speaking five days before riders were set to push their pedals for a 20th time, Miller recalled the mindset organizers were in leading up to the first race.

"(I remember) how utterly frantic we were at this point in time already," he said. "(It came together) by hook or by crook."

Looking back over the event's history, Miller recalled each edition having its moments and surprises find a warm spot in the hearts of riders.

"Every year brings memorable experiences," he said. "You never know what's going to happen when you say 'Go!'

Test of Metal has expanded beyond the single race, adding GearJammer in 2004, Orecrusher in 2006 and JABR in 2010.

"We brought them all under one umbrella because it was easier. To have four different management (teams for four different) races is quite time-consuming," Kerr said. "We had the structure set up and we brought each one under that and merged it under (the) Test of Metal (banner)."

Kerr also noted that to retain riders from Squamish and area, organizers reserved 200 spots for locals to register.

The Test of Metal's furthest-reaching impact came for all the wrong reasons, though, as in 2007, about 250 riders fell ill with campylobacter bacteria after the race. The case was later discussed at the Emerging Infectious Diseases Conference in Edinburgh, Scotland after a Health Canada scientist studied the area for six weeks and presented her findings to the Centers for Disease Control and Prevention in Atlanta.

More often than not, the simplest explanation is the correct one. "Bear sh-ts in the woods" were the culprit, according to Miller, as the mud and dung and anything else mixed in the muck stew that flung up onto riders' water bottles was prone for consumption.

"They never found the smoking gun for it," he said. "There's not much we can do about it. Apart from wearing masks, it's impractical."

Kerr recalled being covered in mud that year when he completed the race.

"The whole course was just a mud bath. Going down the Ring Creek rip, there were puddles of mud of about 100 feet long that you just prayed you were able to come out of it and not crash," Kerr recalled.

A 20th anniversary celebration is planned for Friday night (June 19) from 6 to 9 p.m. at Brennan Park Recreation Centre. There will be chariot races, a show and shine, live music from Bluesberry Jam and other "general fun mayhem," according to Miller.

He added not to worry about the race's future, saying he and the organizing committee are in it for the long haul.

"We've got a good team of people," he said. "We're committed to doing this for another while, so there are no plans to go anywhere. We're still having fun doing it."

Meadow Park set to reopen on Aug. 17
Aug 12, 2020 11:50 AM
Comments
We welcome your feedback and encourage you to share your thoughts. We ask that you be respectful of others and their points of view, refrain from personal attacks and stay on topic. To learn about our commenting policies and how we moderate, please read our Community Guidelines.