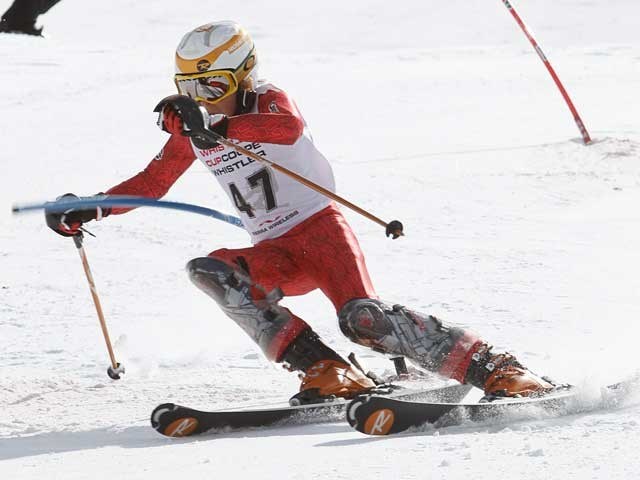 On Your Mark K1 skier Marc Leroux crashes a gate in the slalom on Saturday, contributing to Canada’s overall title at this year’s Whistler Cup races. Photo by Justa Jeskova, www.coastphoto.com

Skiers in last weekend's 17th annual Whistler Cup races saw every type of condition over three days of racing, with sun, snow, rain, fog and constantly changing course conditions. Whistler skiers, as familiar with the runs as they were with the conditions, made a huge impact with three podiums in the K2 category, and both overall awards as the top Canadians.

Thompson, who also won the Dave Murray Award as a K1 in 2007, was happy with his weekend, and is hoping to move up to the B.C. Ski Team next year as a FIS racer.

"I just raced as hard as I could every day," he said. "I know the course, they did a great job with the conditions, and we trained all week to get ready."

Thompson and Darlington were both named to Team Canada after the nationals the previous week, and were able to participate in an Iris-sponsored camp with national level coaches in the week prior to the Whistler Cup. Thompson welcomed the training opportunity, as well as the opportunity to improve his seeding in the Whistler Cup races.

"I really wanted to get a good start position because you never know how the course is going to hold up at this time of the year," he said.

Darlington came into the race still shaken up after a crash at the national championships where she injured her arm, but she wasn't looking for any excuses. She set out to be the top Canadian in every race and was happy with her results.

"The nationals are a big deal, but this is the biggest race of the season so it definitely feels good to be able to step up in a few races," she said.

"The Iris camp helped a lot, I think, and we've all been pretty much racing straight for two weeks leading up to this so it's also nice to see the work pay off. You always have higher expectations when you're racing at home, even if it is against girls from all over the world.

"This is my last year as a K2, and I'm excited to move up to the next level and try out for the B.C. Ski Team next year, and hopefully work my way up to a World Cup spot (and chance at the Olympics) in 2014."

The Canadian K2 team placed second to the U.S. team for the second straight year, while the Canadian K1 team placed first. However, when the K1 and K2 results were combined Canadians took the overall team title this year. The Canadians last claimed the Whistler Cup title in 2007.

National teams entered in the Whistler Cup included six K2 and four K1 racers, both men and women, and only top-15 results would count towards the overall standings.

The Whistler Cup opened on Friday, with K2 super G and K1 slalom.

In super G, Bara Strakova of the Czech Republic placed first in a time of 1:07.54, followed closely by Kailee Darlington's time of 1:07.89. Mikaela Shiffrin of the U.S. was third in 1:08.54. Devon Clarke and Mary Beth Hemphill of Ontario rounded out the top five. Emma King of the Whistler Mountain Ski Club was 30 th out of 87 starters.

Broderick Thompson dominated the men's race with his time of 1:06.47, more than a second faster than the next competitor. Thomas Robles and Eric Haferman, both of the U.S., were second and third in 1:07.54 and 1:07.55 respectively. Jak Kennedy of Ontario and Mikael Svensk of Finland tied for fourth in 1:07.87. Logan Pehota was 27 th out of 95 racers.

In the K1 men's race, Samuel Senkar of Slovakia posted the top time of 1:09.04 with Revelstoke's Lachlan Hicks and Chris Doan of Ontario - both racing for Canada - placing second and third in 1:10.56 and 1:10.95 respectively.

Day two was the K2 slalom and K1 giant slalom. In K2 women, Mikaela Shiffrin of the U.S. and Bara Strakova of Czech Republic picked up their second medals of the weekend, finishing first and second with times of 1:36.59 and 1:36.63 respectively. Paula Moltzan of the U.S. was third in 1:37.32, with Kelly Moore of Ontario fourth in 1:37.86, and Nikki Verbon of The Netherlands fifth in 1:39.75. Rae Swette was the top Whistler racer in 28 th place in 1:48.64. Kailee Darlington disqualified in her first run.

The final day featured the K2 giant slalom and K1 Kombi event, with snow only allowing for one run in each event. Czech Bara Strakova and American Mickaela Shiffrin earned their third medals finishing first and third with one-run times of 55.63 and 56.07 respectively. Paula Moltzan of the U.S. was second in 55.84. Devon Clarke was the top Canadian, in fourth place, and Kailee Darlington tied for eighth with Hyun-Gi Lee of Korea.

Gabriel Presseault was the top Canadian, in sixth place, with Broderick Thompson seventh in 57.56.

Chris Doan of Canada won the men's race in 54.92, followed by Keiya Saito of Japan and Fedor Myagkov of Russia. Jack Iles was the top Whistler racer in 27 th in 50.82.

In last week's story about the K2 national championships, the writer said that athletes from the Whistler Mountain Ski Club went to the Westerns and then the nationals, but in fact two different teams attended those events based on their results in the provincials. The exception was Sofi Leroux, who went to Westerns, then the nationals as an alternate.