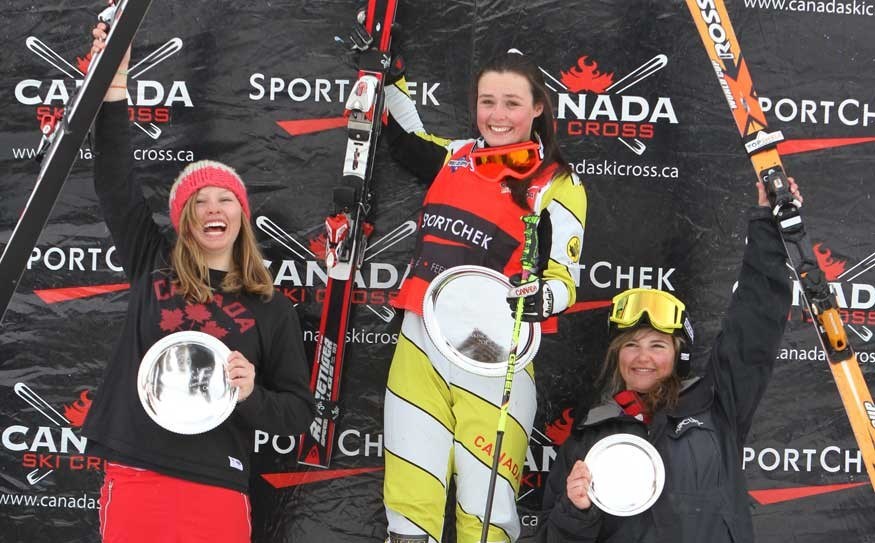 This past weekend at Nakiska, the Canadian Ski Cross Team raced for the first time since teammate Nik Zoricic was killed in a World Cup race in Switzerland on March 10. Athletes placed "Ski4Nik" stickers on their helmets in his honour, and then raced hard in his name — a fitting tribute for a skier who had raced one way or another for more than two decades of his life.

Whistler's Marielle Thompson was the woman to beat. Thompson's first win as a member of the national team came at the nationals last year, and she followed up this past season with her first World Cup podium in the very first event. She followed up with five more podiums, including three gold medals, and took the overall Crystal Globe. Her points also helped her team to the overall Crystal Globe.

History will put an asterix on the result with the last two races of the season cancelled following Zoricic's death, but she clearly had the momentum at the end of the season after winning the last World Cup race and placing first in the qualifier at Switzerland — if anything she was the favourite to take the title.

At nationals, Thompson was the favourite as well, with teammates Ashleigh McIvor (Olympic champion), Kelsey Serwa (World Champion) and Julia Murray (second in World Championship) still on the sidelines with knee injuries. A few other young athletes took part in events this season, but Thompson was the only senior member of the team — at 19 years old — to travel with the World Cup group.

She easily won the qualifier and two heats to repeat as national champion.

"It was a good finish to the year, that's for sure. It's been a great season. I've just got to keep it going next year."

India Sherret of Cranbrook placed second in the women's final, while Whistler's Sarah Lepine — who placed 11th at the FIS World Juniors this season — placed third.

Thompson rode the lifts with the up and coming skiers, remembering what it was like for her only a few years ago.

"It's nice to talk to them," she said. "Kelsey, Ashleigh and Julia all talked to me when I was younger."

A few members of the men's senior team opted to skip the final race, but did take part in the qualifiers to get back on their race skis for the first time since Zoricic's death.

"Some of the guys who didn't race had a good qualifying (round) yesterday to kind of get back on the horse," said head coach Eric Archer. "The racing I saw in the final with (Whistler's David) Duncan and (Tristan) Tafel looked back to normal and it was exciting. Everybody's got smiles on their faces; it was fun again."

Tafel, who won a World Cup race this season while earning his first career podium, won the men's national race, edging out Duncan in a close-fought race.

Tafel took the hole shot to start the race in first, but Duncan stayed on his tails the rest of the way down the course.

"We were four wide going into the first turn. Dunc gave me the 'Go! Go! Go!' and I just attacked into the first and second turns... The last section of the course, Dunc caught the draft on me and started reeling me in. I gave him a little bit of room and we didn't have any contact. He made an amazing pass on me. It shows how much of a veteran he is. There aren't many guys on the (World Cup) tour that can pull a pass on the hip. It's unreal how close it was."

Tafel regained the lead over the finish jump, winning by a fraction of a second.

Whistler's Stan Rey was also going for the title, but found himself in a semifinal with Duncan and Tafel. They were neck and neck until Rey got edged out at a corner and finished his day in the fence. At the bottom of the course his teammates pied him for good measure.

"I still had fun — that's what it's all about," said Rey. "They put me in the fence and then they pie me, too. I guess that's what you call sportsmanship."