Top skiers to be absent in Whistler for Canadian 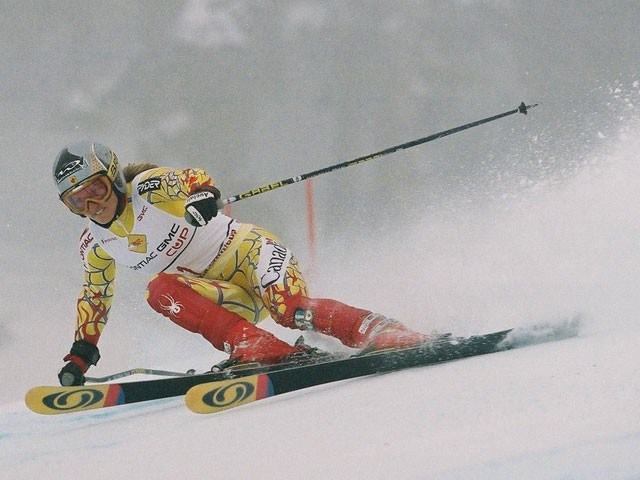 Britt Janyk will not be at the Pontiac GMC Canadian Championships

Some of Canada’s top skiers won’t have a chance to compete in the speed events of the Pontiac GMC Canadian Championships in Whistler this February after a World Cup scheduling change created a conflict for the women’s speed team and men’s technical team.

Ken Read, CEO of Alpine Canada, said it was out of their hands.

“(General Motors Canada) is one of our major sponsors and we’re extremely cognizant of the fact that we need to have all our top athletes there that can possibly be attending, despite the fact that a couple of events are in conflict,” he said.

“Normally at that time of the year the athletes would get a bit of a break, a two week gap after the last downhill in Europe where athletes normally get to rest or go home, and our national speed events are right in the middle of that. Now, with the scheduling change the championships are on top of the World Cup in Sestriere for the Ladies, so you can imagine that Emily Brydon, Britt Janyk, Kelly VanderBeek should be in Sestriere. On the guys side there’s a slalom in Garmisch (Germany) which will take away Mike Janyk, Paul Stutz, and that group.”

According to Read, schedule changes are a fact of life on the World Cup with maybe 15 weeks to host all the events in Europe, North America and Asia.

Most of the team will be in Whistler, Read adds, with the exception of athletes that are in contention for medals and World Cup titles.

Read apologizes to race fans, but says the athletes will be in Whistler for the World Cup. His biggest concern is that those athletes won’t get as many opportunities to pre-run the downhill course.

“It would have been nice if they could have had a preview of the course prior to the World Cup, but I know they have been skiing the course and will have some subsequent training as well,” he said. “It’s also important to have these national championships for the system, because the rest of the athletes can get an opportunity to compete with all of the top athletes.

“We also know that there are a lot of people working awfully hard to put this event on, and who want to see the top athletes here. I can say this, that almost all of the top athletes are going to be there.”

Britt Janyk said she suspected that this could happen, and was prepared for the news. “It would have been a great opportunity but I am much happier with my place in the World Cup standings right now,” she said. “The World Cup events are most important for us and I wouldn’t miss (Sestriere), even if it does mean missing an opportunity to run the Olympic track. We will get time to train on the hill and I made sure that I did some freeskiing on the hill over the holidays.”

In addition to an opportunity to ski the Olympic venues, the national championships are worth FIS points for up and coming athletes looking to make the national team and development team. The prize money is also an incentive for racers, with the winners in each category receiving a cash prize of $5,000 last year.

The speed events of the Pontiac GMC Canadian Championships take place from Feb. 6-11, followed by the World Junior Qualification events on Feb. 12-13. Whistler will then host World Cup races from Feb. 19 to 24.