Stephen Wheeler, in his first Ironman, was top local competitor
Sep 3, 2010 9:03 AM By: Andrew Mitchell 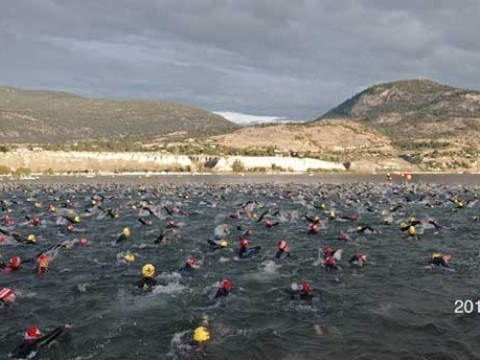 The annual Ironman Canada competition in Penticton is always a challenge, and perfect weather conditions from start to finish are rare. The temperature has risen above 35 degrees some years, while in others the athletes have found themselves breathing smoke from nearby wildfires.

The 28 th annual race last Sunday was no exception. The weather was cool for the most part, just breaking 20 degrees Celsius in the afternoon. While that was good for athletes prone to overheating, the temperature change also brought higher winds and some rain, making it tougher on the cycling section.

All-told, some 2,780 athletes were at the start line this year for the race, which begins with a 2.4 mile/3.8 km swim on Okanagan Lake. That's followed by a 112 mile/180 km bike on local roads and highways, and then a 26.2 mile/42.2 km full marathon that finishes on the Penticton waterfront.

The top male, Ukrainian Viktor Zyemtsev, completed the race in eight hours, 32 minutes and 28 seconds, just 13 seconds ahead of the next racer. Meredith Kessler of the U.S. won the women's race in 9:13:46.

"Everything went pretty well actually, and I'm pretty amazed how I did," said Wheeler.

While the wind and rain was an issue on the cycling leg, and made the last third of the ride cold, he kept his chin up until he got to the run. He had some issues with cramping near the start, and then a third of the way into the run he strained his calf. It was nothing that Advil couldn't handle, however, and he made it to the finish line well ahead of his best estimate.

"I just tried to have fun and take a positive attitude toward the whole thing, and that seemed to work pretty good," he said.

"It's an amazing race, just with all the support and everything, the crowds at certain places on the route cheering you on, chatting with people on the bike and on the run as you're going along. The volunteers are pretty amazing," he added.

Wheeler didn't sign up the next day for the 2011 race, but hasn't ruled out competing in Ironman again in the future. He says he will talk to coach Christine Suter in the New Year and talk about the possibility of doing some Half Iron races.

"I've been training for this for 12 months, and I'd really like to keep up this fitness level," he said.

While it was short of his top-five goal and a spot in the Ironman World Championships, Blok was happy with his race and his time.

"I got a sore knee on the bike and the run was hard, but I didn't feel like I had a bad race, and I felt like I was giving it all I had," he said. "It was pretty wet and windy, but I don't know if that affected me that much. I think the cooler weather was an advantage for some people."

Blok was late starting his Ironman training this year. While most people are on a program by January he waited until May to get started. Given that he is a trainer and works out all day, he said it was tough to find the time and energy to train at the end of the day.

"You either have to race or train other people, it's hard to do both. Overall it was pretty good - I'd forgotten how hard the race is, and I'm already starting to forget how tough this one was. But when you're into that run and heading back to the finish, it gets really hard."

Blok hasn't ruled out competing again in the future. His goal is to one day qualify for the Ironman World Championships in Hawaii, which would mean finishing in the top three to five positions.

Complete results are online at www.ironman.ca.