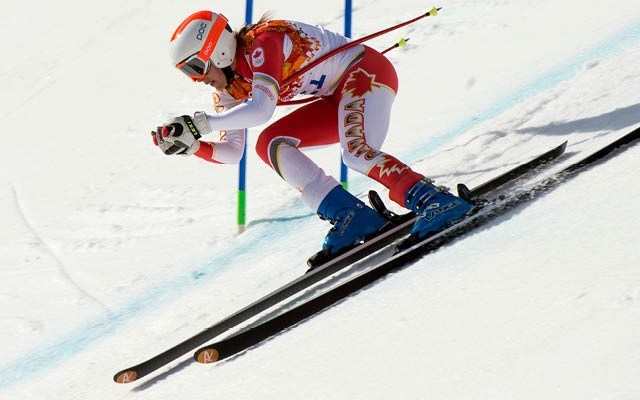 The first alpine ski races in Sochi didn't go quite as the Canadian team had planned, but it wasn't the worst-case scenario that likely played out in the minds of Alpine Canada brass at one point on Day 3.

Marie-Michele Gagnon straddled a gate and took a hard tumble during the slalom run of the women's super combined on Monday, Feb. 10, sliding shoulder-first into a gate before stopping. She came up clutching her arm and was taken to hospital for assessment, where it was determined she had a dislocated shoulder and bruised leg, but no ailment is expected to bring her Olympics to an end.

For Gagnon — who is one of Canada's best hopes to end the country's 20-year Olympic medal drought and has three races to come — to be relatively healthy after Monday's scare would have come as a huge relief, particularly after the men's downhill team didn't get the Games off to an inspiring start.

"We will have to see how it goes, but I'm hoping to keep racing here in Sochi," Gagnon said in a statement released by Alpine Canada. "I really want to show people that you can overcome obstacles and still do great things."

The Canadian men never really threatened the medals in the Feb. 9 downhill, which saw none of the favourites reach the podium while Austria's Matthias Mayer skied to gold. Erik Guay was 10th for the top Canadian finish, and the Cowboys didn't have a ton of answers afterward.

"All in all, I was happy with my run all the way down, I mean there were little mistakes but nothing big," said Whistler Mountain Ski Club product Manuel Osborne-Paradis, who was 25th. "I was just nowhere near fast, so not really sure what happened."

Italy's Christof Innerhofer took silver and Norway's Kjetil Jansrud edged countryman Aksel Lund Svindal for bronze. Bode Miller was pegged as a favourite after skiing so fast in training, but the American finished eighth, over a half-second back. Canadians Ben Thomsen and Jan Hudec were 19th and 21st, respectively.

Larisa Yurkiw, whose road to Sochi has been an inspiring story for Canadian fans, skied to 20th place in a historic women's downhill on Wednesday, Feb. 12. The Owen Sound, Ont., native, who lost her national team status in the offseason but still qualified fundraised her way to the Games, finished 1.89 seconds seconds back of the winning time — which was set by two skiers.

Incredibly, both skiers have finished tied for victories in the past. Gisin was equal with Sweden's Anja Paerson in a 2009 downhill, the last women's downhill to end in a tie, while Maze was part of a three-way World Cup GS deadlock in 2002.

Looking ahead, indications were that Whistler's Morgan Pridy will make his Olympic debut during the men's super combined on Friday, Feb. 14. The 23-year-old earned his first World Cup points from a combined race last month at Kitzbühel, Austria, finishing 24th, and placed 11th in the first downhill training run held Tuesday, Feb. 11.

Pridy will also be racing in the super-G on Feb. 16, swapping places with Thomsen on the Canadian speed team for its last chance at a medal in Sochi.

Gagnon is scheduled to race in the women's super-G the day before, but the tech events, her strongest disciplines of slalom and giant slalom, are the last races on the Olympic program for both men and women.

Whistler's Mike Janyk and fellow veteran Brad Spence will lead the Canadian team in the technical events, with the men's slalom scheduled as the last alpine race of the Games on Feb. 22.