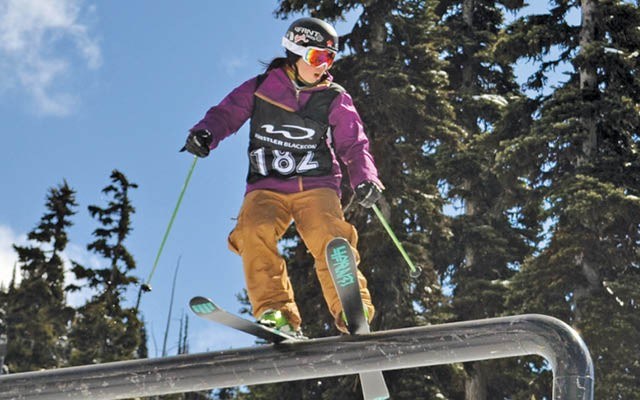 The Olympics seemed like a distant dream for Yuki Tsubota just a couple of years ago when she was a young moguls skier making the switch to slopestyle.

Tsubota was named to the Canadian Olympic team on Monday, Jan. 20 after matching her best result of the season in the final qualifying event just two days earlier.

Her fifth-place finish in the U.S. Grand Prix contest at Park City, Utah, on Saturday, Jan. 18 cemented her spot in Sochi, where slopestyle will be an Olympic event for the first time.

"I don't know if it's really sunk in or hit me yet," Tsubota said Sunday, Jan. 19 from Aspen, Colo., where she'll be competing in the Winter X Games later this week.

"This has definitely been a dream of mine since I was pretty young. When Jenn Heil won in Torino (in 2006) that was when I realized I wanted to go to the Olympics. "Back then I was hoping to for moguls, but things have changed."

Tsubota, who had finished ninth at Park City on Friday, Jan. 17, earned her other top-five result of the winter from the previous weekend's weather-shortened World Cup at Breckenridge, Colo. But after a shaky start to the season, an Olympic berth wasn't a certainty for the Whistler skier until her spot was confirmed on the weekend.

"To be honest, I've been stressing pretty hard for the last few weeks," she said. "The first two contests I did (this winter) went pretty bad.

"But that fifth in Breckenridge a couple of weeks ago made me feel better."

And Tsubota, who will celebrate her 20th birthday a few days before the opening ceremonies in Sochi, didn't lose confidence in herself despite some frustrating finishes early in the season.

"I know if I put down a run I can do well, so that's the biggest thing for me," she said.

Tsubota is currently in Aspen, Colo., where she'll compete this week in the Winter X Games, the last competition on her schedule before Sochi, then return home for a short break. When she arrives at the Olympics, Tsubota said she'd be trying not to put too much pressure on herself to perform.

"I don't like that pressure," she laughed. "Just going to the Games is a big thing for me. But for sure, the podium is where I want to be."

Kaya Turski, Dara Howell and Kim Lamarre will also represent Canada in women's slopestyle at the Olympics, while Alex Beaulieu-Marchand will be the lone men's competitor.

CAREER-BEST FINISH NOT ENOUGH FOR D'ARTOIS

Whistler's Simon d'Artois came up just short of the men's halfpipe podium at Park City on Friday, finishing fourth, but the career-best result wasn't enough to get him a spot on the Olympic team.

The 21-year-old was not among the group of four national team skiers who were selected to the halfpipe squad for Sochi. Mike Riddle, Noah Bowman, Matt Margetts and Whistler's Justin Dorey earned the Olympic selections, representing the maximum number of athletes Canada could send.

"I'm a little bit bummed, for sure, but it is what it is," d'Artois said Monday from Aspen. "I've been skiing really well, so I'm excited about that part. There's always another Olympics, I guess."

The good news for d'Artois is that he's heading into his first X Games appearance skiing as well as ever. His fourth-place finish came after he worked a pair of double corks and a switch 720 into his run, and continued a streak of strong results.

"I'm feeling really confident coming into Aspen," he said. "I just want to put down a run and hopefully I can place pretty high here. That would be awesome.

"I'm not too worried about it being the X Games or anything, I'm just excited to get back on snow."

Roz Groenewoud and Keltie Hansen will all compete in women's halfpipe at the Olympics for Canada. Megan Gunning had been named to the team but injured her knee in X Games training this week and will not be competing in Sochi.

HICKS NOT HEADED TO SOCHI

Whistler's Eddie Hicks did not get the call to the Olympic squad either, but the national moguls team skier had seen the writing on the wall when injuries wiped out nearly all of last season for him.

"I'm pretty indifferent," said Hicks. "Obviously, I'm not saying I don't really want to go — if you gave me the choice I'd jump at it in a heartbeat. But realistically, getting injured last year gave me basically six results this year as my chance to qualify, which is pretty difficult.

"It was definitely a goal, but I didn't have all my eggs in that basket."

Hicks was unable to qualify for finals in the last three World Cup events and likely would have needed multiple podiums this winter to be considered for Olympic selection.

Alex Bilodeau, Mikael Kingsbury and Marc-Antoine Gagnon are all headed to Sochi, but Hicks said he was "shocked" that a fourth man won't be going for Canada, considering the national team's dominance of the moguls circuit over the past quadrennial.

"I mean, Phil (Marquis) was on the podium in Sochi last year... it was pretty crazy to see him fall one place short of qualifying," said Hicks. "I can't imagine what it must be like to be in his place."

UPDATE: Marquis was added to the team on Thursday to replace the injured Gunning.

The Dufour-Lapointe sisters — Chloe, Maxime and Justine — are all heading over to Russia for women's competition, as is Audrey Robichaud.

Travis Gerrits will be Canada's lone aerials competitor in Sochi.