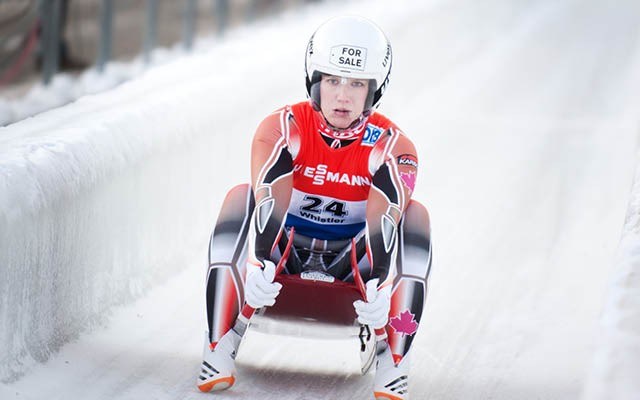 Better than Bronze Canada's Alex Gough finishes up her first run in women's World Cup luge competition on Dec. 7 at the Whistler Sliding Centre. Gough captured a silver medal in her individual race and helped the Canadian relay squad to a runner-up finish as well.

One year out from the 2014 Winter Olympics, Canada's chances to bring back medals from Sochi in luge were looking pretty good.

And now, based on the results from this past weekend's World Cup races at the Whistler Sliding Centre, those chances are looking even better.

The Canadian luge team put together a two-medal weekend on home ice Friday and Saturday, Dec. 6 and 7, with Alex Gough capturing a silver medal in Saturday afternoon's women's race, then helping the host nation to another silver-medal finish in the evening's team relay.

Germany won all four of the weekend's races, as expected. But by putting a sled in the top six of every event, Canada showed that it's solidly the No. 2 nation in the sport's power rankings just two months out from the Olympics.

Not bad for a country that's never been on the luge podium at the Games before.

"We're behind the Germans; we're not happy about that at all," said veteran team member Sam Edney after wrapping up the relay. "But I think we're slowly closing the gap."

When Whistler hosted the world championships last winter, Germany took home eight of a possible 10 medals, while Canada — with a relay silver and Gough's individual bronze — was the only other country to score multiple podium finishes.

But the powerhouse Germans were limited to six medals in Whistler this past weekend. Meanwhile, Gough improved her placing by one spot, and Germany's margin of victory over the Canadians in Saturday's relay was a little less comfortable compared to the 2013 worlds.

The result was also a bit of a bounce-back performance for the Canadians, who were disqualified the previous week in Winterberg, Germany, when Walker and Snith left the start too early.

"With the false start we had last week, that definitely rattled us a little bit, but this week was really good," said Walker, who slides the relay's final leg with Snith. "We still had really good reaction times."

Including last year's world championships, Canada has now picked up a medal in six of the last 10 relay events, one of them being a bronze in Sochi at the end of last season.

"We all said at the finish that we're pretty happy to show that we're still on the podium," said Edney. "We know it — if we put down three consistent runs, then we're competitive."

Gough's individual result Saturday was the 11th World Cup podium of her career, but just the first time she's taken silver. The 26-year-old, who had two wins and eight third-place finishes coming in, clocked a two-run time that was 0.133 seconds back of winner Natalie Geisenberger.

"I felt like I pulled really good starts," said Gough, who had the fastest takeoff times on both runs. "My second run wasn't as great as I wanted it to be, I had a few little skids here and there and it could have been a little bit better... but I had two good, consistent runs and I had the performance I wanted."

Geisenberger has now won all four women's events this season — taking the victory on Saturday despite sliding while sick — and Gough said it takes a near-perfect race to challenge the reigning world champ these days.

"She's just on right now," said Gough. "I'm going to keep chasing and trying to catch her at the start and down the track."

McRae won the Dec. 5 Nations Cup race, which acts as a qualifier for the World Cup event. Pemberton's Jenna Spencer participated in that race as well and placed ninth, which would have put her into the field for a World Cup start on Saturday had she been identified by Luge Canada as a designated athlete for the event.

Walker and Snith matched a career-best finish on Friday by finishing fourth in the doubles race. The 22-year-olds sat sixth after the opening run but moved up two spots with a quick second session that left them 0.291 seconds behind the winning German team of Tobias Wendl and Tobias Arlt, and just 0.027 off the podium.

"The difference was our first run," said Snith. "We had a couple of little skids on the way down, and that was the difference between fourth and third."

Walker and Snith now have three fourth-place finishes during their World Cup careers together, earning the two others at the end of last season. They were also fourth at the world championships last winter.

"Our last race (at Winterberg), we were in fifth place but just 13 thousandths from the podium," said Walker. "That's racing, though, in luge. It's a really close sport. But I think we're definitely capable of pushing up into the top three."

Edney recorded his third consecutive sixth-place finish in his individual race Friday, having placed in the same spot at Winterberg and Igls, Austria over the previous two weeks.

"Sixth place is a great result again," said the 29-year-old. "I know that it's that close to the podium. It's a matter of tenths of a second, which is inspiring and motivating."

Germany occupied the top three positions after the opening run, but David Möller and Andi Langenhan fell out of the medal positions on the second run to place fourth and fifth, respectively. Rounding out the Canadian results, Mitchel Malyk finished 19th on Friday and John Fennell placed 24th.

Edney, who is good friends with Mazdzer, said he could take some inspiration from the American's podium finish as he aims for the first top-three of his career as well.

"That's going to motivate me to know that I can be that guy," said Edney.

"(My result) signifies that we're doing the right things as a team. The sled's running really great right now, which is something that I'm really thrilled with."

The World Cup schedule now heads to Utah's Park City track for races on Dec. 13 and 14, the final ones before the holiday break.

According to a Dec. 4 release, the 2010 Olympic venue operator, Luge Canada and Bobsleigh Canada Skeleton have signed a memorandum of understanding that will see all parties work together to increase Canada's competitiveness in international competition and share long-term goals of promoting sliding sports nationally.

"The 2010 Olympic Winter Games and the Whistler Sliding Centre have played a critical role in developing Canada's luge athletes from participants to medal contenders at levels on the international stage," said Luge Canada executive director Tim Farstad in the release. "

"Our three organizations working together will certainly help elevate sliding sports in Canada," said WSL president and CEO Roger Soane. "We are pleased to make our commitment to sliding sports official."