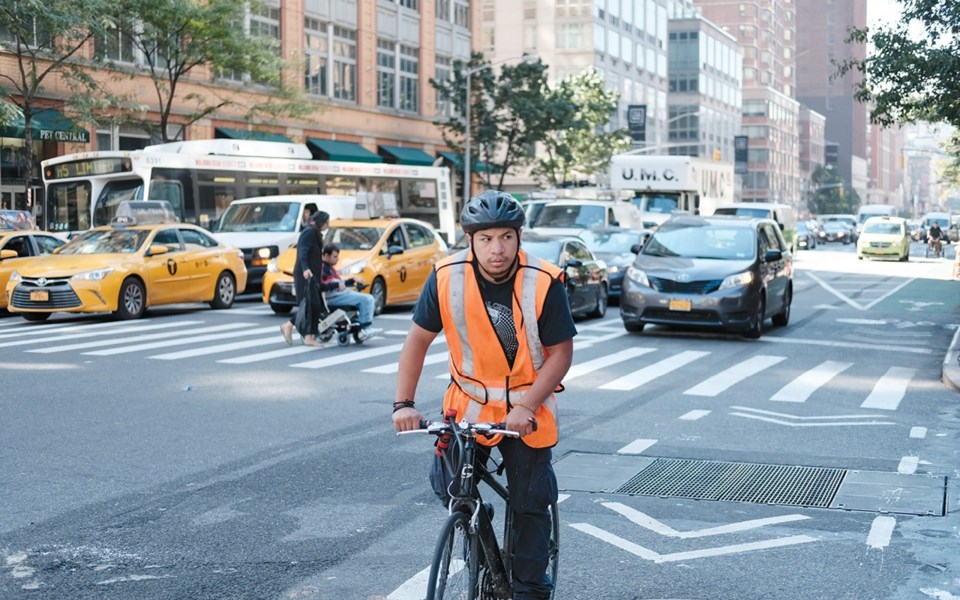 A recent study by the University of British Columbia Okanagan has concluded that when it comes to cyclist safety, being seen is helpful, but more can be done to protect riders.

Researcher Gordon Lovegrove, an associate profession in the School of Engineering, said in an interview that wearing high-visibility vests increases safety for riders, but adding an arrow to a vest, directing away from the rider, encourages drivers to give the bike a wider berth.

One part of the study, an online survey of drivers, confirmed this. The survey included pictures of riders in various clothes, including construction and high-visibility vests, taken from different distances. In the case of the vest featuring an arrow, that directional indicator was the most prominent feature.

"Sure enough, they couldn't tell what it was at a certain distance," Lovegrove said. "They could tell that there was something up ahead. Anybody, when it included the arrow, they were like, 'Well, that's a keep-left sign.' It was just perfect."

The most important conclusion for the researchers, according to Lovegrove, is that the drivers responded to the arrow by indeed keeping left despite not even being certain of the reason.

"That was a victory because that's what we're trying to do—appeal to instinctive responses. That way, you minimize error on a driver's part," he said. "You're appealing to their self interest. They're going to veer left instinctively."

In the online survey, 75 per cent of drivers said they liked the arrow vests, while in a road trial, drivers gave riders with the arrow vests roughly an extra foot (0.3 metres) of passing space.

"A foot makes a difference," he said. "We were able to pick that up using our LiDAR (light detection and ranging) scopes, and (the riders) were also agreeing ... with the level of comfort."

The road trial featured 105 total participants, and was an amalgamation of studies done over time. Lovegrove said the first featured 75 riders while the remaining studies continued that work with a refined focus on arrow vests.

In addition to providing different variables for riders, such as whether they were wearing a high-visibility vest and if so, which type, the changing settings helped the researchers analyze the difference in driver behaviour on the arterial roads, such as when they have to consider driveways.

Riders were surveyed before and after the ride. The first survey was to give researchers a sense of their skill level and vital stats, while the second one was to understand under which circumstances they felt the safest while riding.

The Natural Sciences and Engineering Research Council of Canada funded the study, which was vetted by UBC researchers.

Lovegrove noted that the researchers also collected objective data, attaching light detection and ranging (LiDAR) scopes to the front and back of the bike, GoPro cameras facing the rider and the street, and a sensor recording the rider's speed, position and vertical gain.

Lovegrove acknowledged that while the researchers took efforts to minimize bias, it will never be entirely eliminated in such studies. There were also some limitations with the study, he said, considering its small sample size, as he would like to see it done with hundreds of riders and is looking for both volunteers and students to continue the research.

Still, the results are encouraging and provide some instruction for how riders can be safer on the roads.

"What was really cool is, in the end, at least initially, the results did reflect that adding a communication aspect to the high-viz enhanced the safety. It's great. It's what we hoped would happen," Lovegrove said, adding that the results replicated a similar Danish study about night riding.

Lovegrove, an avid cyclist himself, said he and his wife both use arrow vests and find that they work in their personal lives. Still, he hopes to see greater infrastructure for cyclists, such as divided bike lanes, become commonplace.