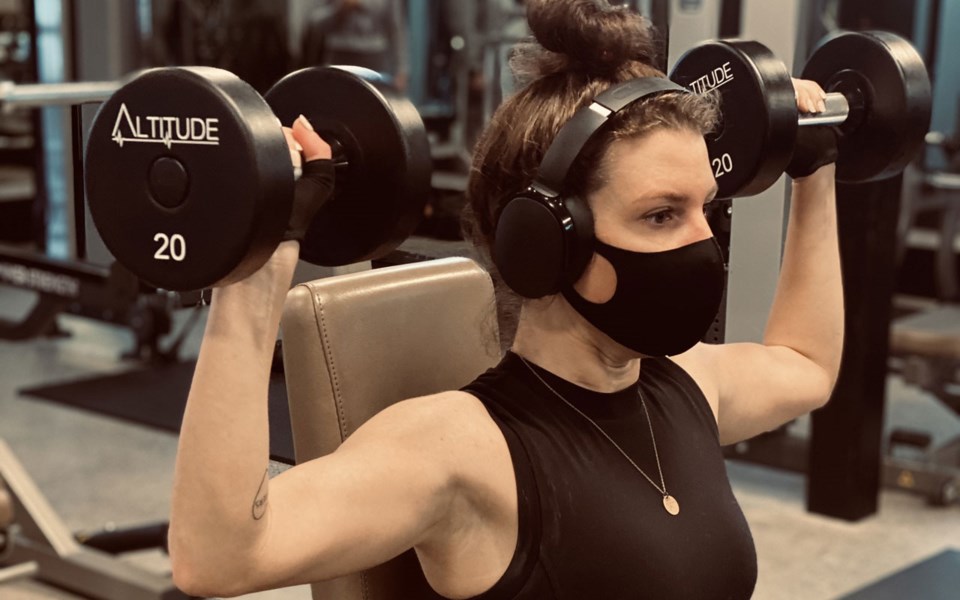 In the four years since she purchased Creekside’s Gateway Building to open her gym, Altitude Fitness, Katie McFetridge has faced vandalism, structural issues and a trades shortage that extended her opening timeline to more than two years.

Now she’s staring down the challenges of operating during a global pandemic, including orders coming down from provincial health officer Dr. Bonnie Henry on Nov. 19 cancelling classes and making masks mandatory.

“The whole shutdown of classes was a pretty big blow,” McFetridge said. “When we reopened back at the end of May, we re-evaluated how we could serve the most amount of people as possible.

“We decided to reduce gym hours and then we’d do an early boot camp. We got 60 women between the three boot camps.

“It was challenging because people wanted us to open the gym early, but this allowed us to serve the most amount of people.”

McFetridge feels for the clients who are striving to stay fit in a bit of an unfamiliar manner.

“Now we’ve got 60 girls trying to navigate the gym without the help of our head trainer,” she said. “It’s kind of shitty, to be honest.”

Adding to McFetridge’s frustration is the efforts she’s put into planning and presenting protocols to the provincial government that last week’s order seemed to toss aside. McFetridge said her plan, first sent along as an original document before she was asked to fill out a 10-page form, detailed the gym’s procedures from arrival to departure.

“It’s a blanket shutdown of classes without evaluating individual cases,” she said. “They had us all send in our COVID plans specifically related to group fitness. When they first announced that, there weren’t any guidelines, there wasn’t any checklist.

“We built our COVID plans for fitness from the ground up.

Other precautions, she explained, included taking temperatures of those in the boot camp as soon as they resumed following the spring shutdown, a policy later extended to anyone entering the facility.

As well, everyone gets their own sanitizing rag and bottle, and, of course, masks are now mandatory. McFetridge hasn’t experienced much pushback, as clients are just happy they’re still operating in some capacity.

Across the highway at Whistler Creek Athletic Club, co-manager Hannah Edleston found a similar response to the changes.

“Some people may have to tweak their workouts a little bit if they find a mask a little uncomfortable to deal with, but it’s for the greater good,” she said. “Most people are really good.

“I prefer to reduce what we’ve got and stay open than try and give everything and have to be closed. We’re just trying to find a happy, safe medium.”

Edleston said that over the course of the past eight months, the gym’s focus has been on supporting its members however possible.

One of those pivots included online personal training and Zoom classes.

“Our Zoom classes are more for our 50-years-and-plus age group,” she said. “It’s been really popular because that’s the age group that isn’t really coming back to the gym.”

Like McFetridge, Edleston has found a similar appreciation for whatever services the gym is able to provide, as she received between 15 and 20 requests for equipment per day after the March shutdown, fulfilling as many as possible with easily moveable equipment like weights, barbells and stationary bikes.

“They were begging me for whatever I had,” she said. “I helped as many people as I could, but I’ve got a limit of what I’ve got and what I can do.

“If I could do something, I would, basically.”

Edleston stressed how important physical activity is for mental well-being, which is being put to the test as the pandemic drags on.

“People really value having somewhere to go to help deal with the mental health side of things. It shows me how many people are really struggling,” she said. “Having no gym and no equipment to work out [with] is affecting people dramatically.

“That we can provide a service to help people through this, I think is vital, really.”