The last minute decision to move the Canada Cup cross-country final to Whistler couldn't have been better for local up-and-coming athletes, with a familiar course in Lost Lake and a chance to prove themselves nationally in their own backyard.
Aug 21, 2013 9:00 PM By: Andrew Mitchell 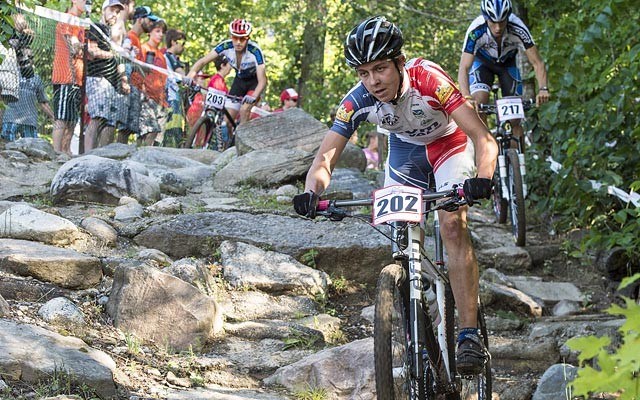 The last minute decision to move the Canada Cup cross-country final to Whistler couldn't have been better for local up-and-coming athletes, with a familiar course in Lost Lake and a chance to prove themselves nationally in their own backyard. The race took place on Aug. 14.

In the Men 18 and Under category, Whistler's Austin Reith took the win on a 16.5km course by roughly three minutes and 40 seconds, posting a time of 1:02:53. Luke Di Marzo of Squamish was second in 1:06:31, followed by John Connor from the Salmon Arm area.

Rhys Verner of Squamish finished just off the podium in the Junior Expert Men race behind a trio of Quebec riders on a 22km course, while Whistler's Mahon Lamont and Felix Burke were sixth and seventh.

The result was a huge disappointment for Burke, who was in contention for the overall title after racing well on the Canada Cup circuit. He also qualified to represent Canada at the World Championships.

"I was actually having a really good day and I was at the front," said Burke. "I had a flat tire and had to run maybe two kilometres to get it fixed. I was happy to finish the race and the course and the crowds were awesome. I'm pretty disappointed but at least I was having a good race, it was just a bad luck on the day."

Burke says he's feeling ready for the world championships, and was overwhelmed by the support of the community the following day when WORCA presented him with a cheque for $1,000 to help with his travel costs — money raised from Toonie Ride entries and donations from members.

"Whistler really is unique, there's no better place in the world," said Burke.

Cathy Zeglinski was the only racer in masters women, finishing 22km in 1:39:51.

Catharine Pendrel destroyed the elite field in the 22km course, showing just how recovered she is from an earlier injury. She finished the course in 1:27:47, over three minutes faster than Sandra Walter's 1:31:01. Jean Ann Berkenpas was third in 1:32:05, with Squamish's Brandi Heisterman a close fourth in 1:32:35.

Geoff Kabush and Max Plaxton had their usual battle in the men's elite category, with Kabush taking this round with a time of 1:34:37 on the 27.5km course. Amercan rider Spencer Paxon was third in 1:38:04. Complete results at www.canadiancyclist.com.

The annual Just Another Bike Race (JABR) concluded the Test of Metal race series this past Saturday, Aug. 17, with Neal Kindree and Sandra Walter both defending their titles for a third straight year.

Kindree has been battling Kris Sneddon all season, and gave him the win. "Kris won that," he said. "I blew up halfway through the race and he had a few minutes on me when he made a wrong turn."

Kindree has had a rough summer, coming down with a stomach bug at the Test of Metal in June. Despite not feeling 100 per cent two weeks later he was back on his bike defending his 2012 title in the BC Bike Race. He made it through the first five days until the Squamish leg, when he started to throw up again. He was sick for weeks after that, losing close to 10kg.

Since then he's missed the GearJammer, cross-country nationals and the Transrockies Challenge and Canada Cup finals. He's feeling better, but out of shape.