The downhill park is up and running but will continue to enforce COVID-19 protocols regardless of vaccination numbers.
Jun 4, 2021 7:00 AM By: Harrison Brooks 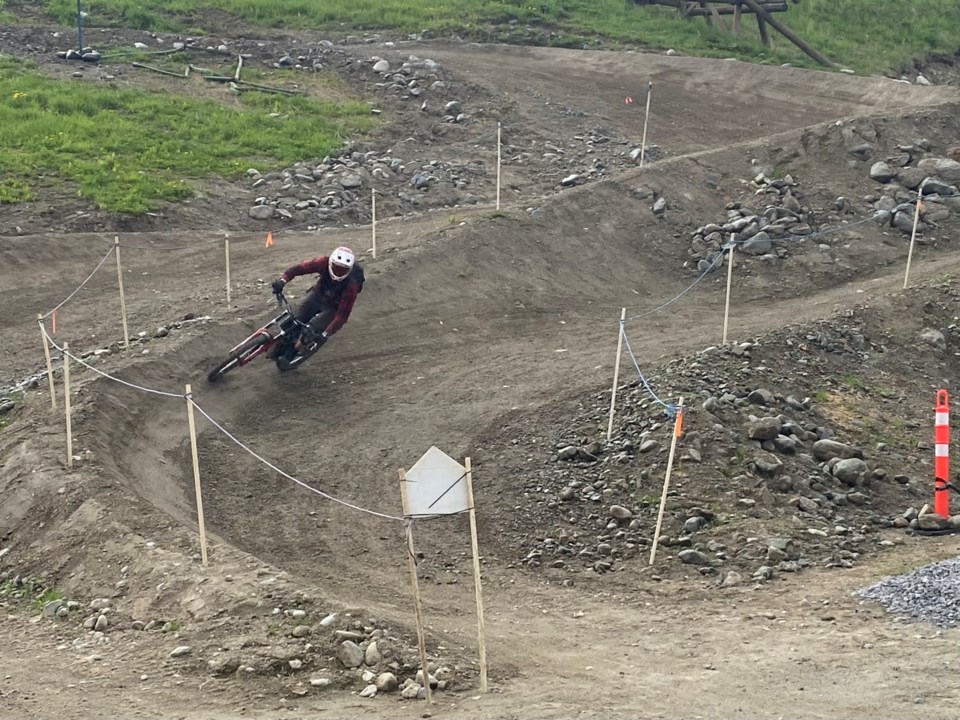 One of the day’s first riders finishes off his run at the bottom of the Fitzsimmons Zone at Whistler Mountain Bike Park on opening day, Monday, May 31.Harrison Brooks

Bikers lined up all the way through the snaking barriers and into the village at the base of the Fitzsimmons Express chairlift for Whistler Mountain Bike Park’s opening day on Monday, May 31.

For some, like local rider Victoria Armstrong, who has been riding the mountain for the past 10 years, there’s a sense of relief at hopefully having a full season ahead after the shortened one last year.

“We’re just stoked that it’s opening. We were pretty nervous that it was going to be a late start or not having extended play was a big thing that everyone was worried about,” said Armstrong.

According to communications and resort marketing manager for Whistler Blackcomb, Jennifer Smith, only the Fitzsimmons Express will be running for the first few days, but the Whistler Village Gondola will be up and running by the weekend to help ease congestion for riders. The Blackcomb Gondola has also been opened for sightseers and hikers.

“This year unlike last year, we are going to have a singles line, similar to what we did in the winter,” said Smith. “So, you just get in that line and two singles who are not in the same cohort will be able to ride together just obviously spaced between. So exactly the same thing we were running in the winter, but it is different than what we were running in the park last summer.”

A few other changes Smith wants to note this year include no eating or drinking in the lineup, so riders should make sure to grab their drink before they get in line for the lift. The mountain is also no longer using the reservation system for buying tickets they were last year, so riders can purchase online or in person like usual.

However, according to Smith, the Time-to-Dine reservation system that was in place last year can still be used if riders want to “pre-book their table for après” at Dusty’s Bar & BBQ or Garibaldi Lift Co. Bar and Grill.

Roundhouse Lodge and Rendezvous Lodge will also be open this year in a similar capacity to the winter, with grab-and-go food options and the same safety protocols in place. However, the big difference is you no longer have to reserve a spot like you did in the winter.

Smith went on to say that the park will be running with COVID-19 safety protocols “regardless of immunization status” and will keep them in place for the entire season, even as more people become fully vaccinated.

While a good portion of the Fitzsimmons Zone is up and running already, some popular runs like Dirt Merchant, Rippin’ Rutabaga and Golden Triangle still need a little more time to dry. In addition to those, the top two sections of A-Line are not open yet as the mountain is still finishing rebuilding it.

“So, we are doing a new build on them, which is targeted at safety and adding more jumps. We are making it a little bit safer and a little jumpier,” said Smith.

“I don’t have a timeline for it other than it will be fairly quick off the top. They’re just about done.”