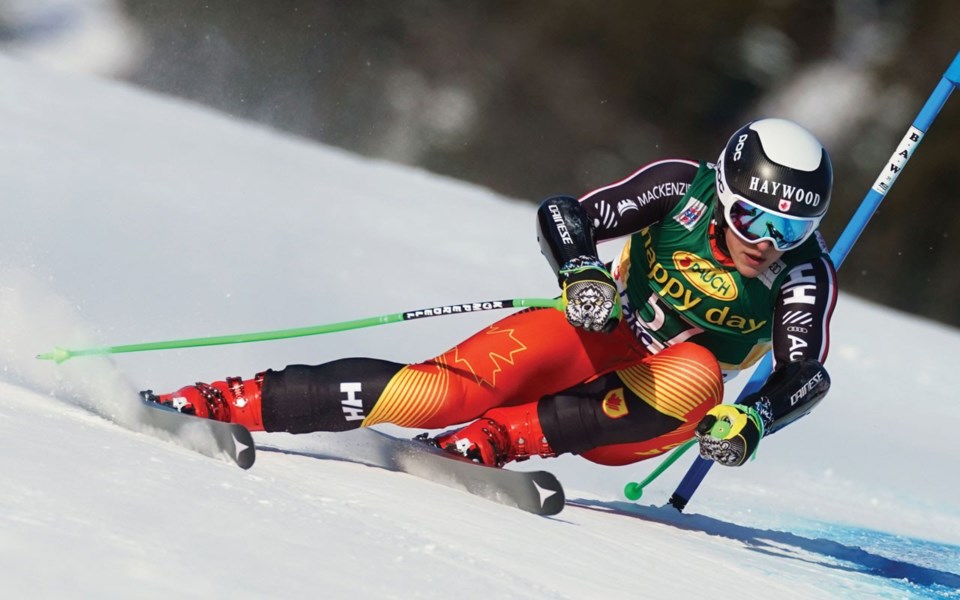 If the start of the 2019-20 FIS Audi World Cup season is any indication, Whistler Mountain Ski Club alumnus Brodie Seger could be on track for a breakout.

In the first weekend of the season, the 23-year-old Seger earned a 16th-place finish in the super-G at Lake Louise, Alta. on Dec. 1, equalling his career best, set in the downhill this January in Kitzbuhel, Austria. He also earned the mantle of highest-finishing Canadian as he finished 1.47 seconds back of winner Matthias Meyer of Austria. Italian Dominik Paris was second and Austrian Vincent Kriechmayr and Swiss racer Mauro Caviezel tied for third.

"It was really special to me, getting a result like that on home soil in front of a home crowd," said Seger, who dropped 57th.

In addition to Seger's parents and other family members, the WMSC U14 group came from Panorama for the day to take in the action, which provided an extra shot in the arm for Seger.

"I saw them before the race. They were all wishing me good luck and cheering me on," Seger recalled. "The first person I actually saw when I came through the finish and who was waving through the crowd was Bob Armstrong from the Whistler Mountain Ski Club.

"He was just giving me a huge cheer, going 'Yeah, Brodie!'"

Seger noted that during a recent Coaches' Cup race at Panorama, comprised of two super-Gs in one day, he won one of them to boost his confidence heading into the Lake Louise race and the World Cup season.

"That was definitely a bit of an affirmation that I was skiing well and it gave me a bit of a confidence boost going into these first big races of the season," he said. "I was just trying to ski with trust in myself and know that I had the ability to make it happen and not try to do anything extra out there.

"It was really rewarding to see it all pay off."

While the mountain conditions at Lake Louise have been hit or miss in recent years, Seger said that the snow was near perfect this time around.

"The conditions last week were awesome. We had really dry, grippy snow and the Sled Dogs [Lake Louise's volunteers] did a great job preparing the course. It was holding up really well, not quite as icy as last year," he said. "The only thing we had to deal with were some really cold temperatures, warming up in the morning in sub-minus-20, that definitely sapped the energy out of you."

In training leading up to the season, Seger explained that Alpine Canada's up-and-coming speedsters managed to one-up each other into collective improvement, which he appreciated.

"We had a really productive prep period coming into the season and we had some really amazing speed training opportunities, which doesn't always happen," he said. "Sometimes, it can be hard to find good conditions and good training opportunities on the glaciers in Europe. Depending on how much snow is around in the preseason when we're training in places like Nakiska and Panorama, [it can vary.] We got lucky this year and we had some really good training conditions.

"I was feeling pretty good about the way I was skiing. Our entire group has been skiing really well in the entire last month of training, so we've all been pushing each other really hard."

Away from the slopes, Seger said his offseason was honed on bulking up and adding mass in the gym as he zeroes in on excelling in speed skiing. Seger's main focus for the 2019-20 season will be doing the full World Cup speed tour.

"That's where my biggest goals are. I want to be in the top 30. I want to get into the top 30 on the World Cup start lists. That's kind of where I need to be moving, that's the next step for me," he said, adding that he'll race some NorAms when it fits into his schedule.

Seger added that shifting away from technical races was a healthy, though challenging, move, as he loves competing in both disciplines.

"My focus narrowed a little bit. I'm starting to get to the point where I need to be more realistic about what direction I'm going in instead of trying to focus on all events," he said. "I'm clearly moving towards being a speed skier, but having said that, I still really care about GS. I still have World Cup hopes in GS as well."

In the Nov. 30 downhill, Thomsen was the top Canadian in 30th, 1.97 seconds back of champion Thomas Dressen of Germany. Paris took second while Swiss skiers Carlo Janka and Beat Feuz tied for third. Other Canadians were: Read and Seger (tied for 46th), WMSC alum Cameron Alexander (48th) in his first World Cup start; and Crawford (57th).

Meanwhile, the Canadian women's team was in action in Killington, Vt.

In the Dec. 1 slalom, Roni Remme hit the top 10 with a seventh-place finish, trailing Mikaela Shiffrin of the United States by 3.88 seconds. Slovakia's Petra Vlhova and Sweden's Anna Swenn Larsson completed the podium.

Seger and the rest of Alpine Canada's young guns will enjoy a fundraiser when they return to Whistler for the Christmas holiday.

The second annual Aiming for the Podium event is slated for Dec. 27 at Buffalo Bills from 8 to 10 p.m. Red Chair is set to perform as well.

Individual tickets are $40 and are available online at www.showpass.com/aimingforthepodium2019.

All proceeds will benefit the young World Cup and Europa Cup team members.