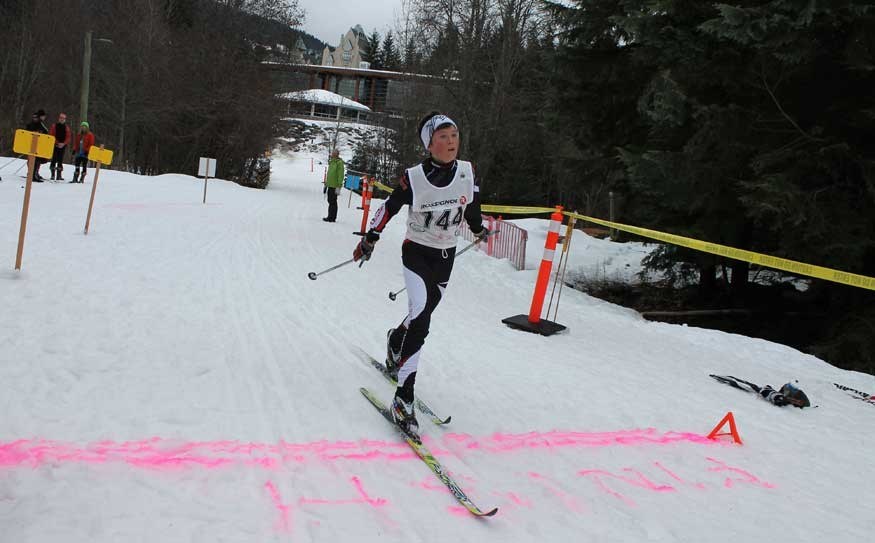 In the individual classic race on Saturday, the Murdoch siblings Michael and Nicki led the team. Nicki was unopposed in the Junior Women 7.5km race, but gave her all anyway and posted a time that would have placed her second in the Open Women's category. Michael was second out of 19 racers in the Midget Boys 5km race, while teammate Owen Reith was fifth overall.

In the relay, the Whistler Nordics' midget boys team placed first overall, while the Midget girls and Junior women were third. The open women's team was fifth and the open men eighth.

The race was also the final event in the provincial series, and overall titles were handed out to athletes who earned the most points this season. Michael Murdoch is officially the province's top Midget racer, while Benita Peiffer, Nicki Murdoch and Lauren Doak were third overall in their respective categories.

The second annual Lost Lake Classic cross-country race hosted by the Whistler Nordics will return on Sunday, Feb. 17 with a couple of course options — a 7.5km course and a 15km race. Soft conditions last year made it a gruelling but fun race, with a low entry fee of $10. If you don't have classic skis, rentals are available at Cross Country Connection. For more, visit www.whistlernordics.com. Registration is available at the start, as well as trail passes. The event gets underway at 11:00 a.m.

Tonight's Whistler Nordics Toonie Race (Feb. 7) is sponsored by Zinetti Foods and Zinetti Lasagne brands, which are available at Costco. The sign-in is at 5:30 p.m. at Lost Lake Passive Haus, with the ride getting underway at 6:15 p.m. The format is relay with athletes sprinting around the lake, so come with a team or be joined up with one. Headlamps are required as always.

The race fee is $2 and you need to be a member of the Whistler Nordics to take part — although a one-time $5 "Try a Toonie" registration is available. You also need a valid trail pass.

Visit www.whistlernordics.com for more information or visit the Toonie Race Series on Facebook.

This Sunday, Feb. 10, the Spud Valley Nordics are hosting their 24th annual Spud Valley Loppet. Online registration is at www.zone4.ca, although you can register at the start line from 9 a.m. to 9:45 a.m. for a 10 a.m. start. The race starts at the Ronayne Farm (16km north of the Village of Pemberton) and skiers will skate or classic their way 12km to the finish line at the Lillooet River Forestry Bridge.

Athletes training for longer distances, like Sigge's P'ayakentsut, can turn around and ski back to the start or skiers can arrange car swaps. Nobody has been left behind yet.

The after-race celebration is at the Fouberg House at the finish line, starting at noon.