Technology would create greater certainty of conditions with major events coming
Jan 8, 2021 8:00 AM By: Dan Falloon 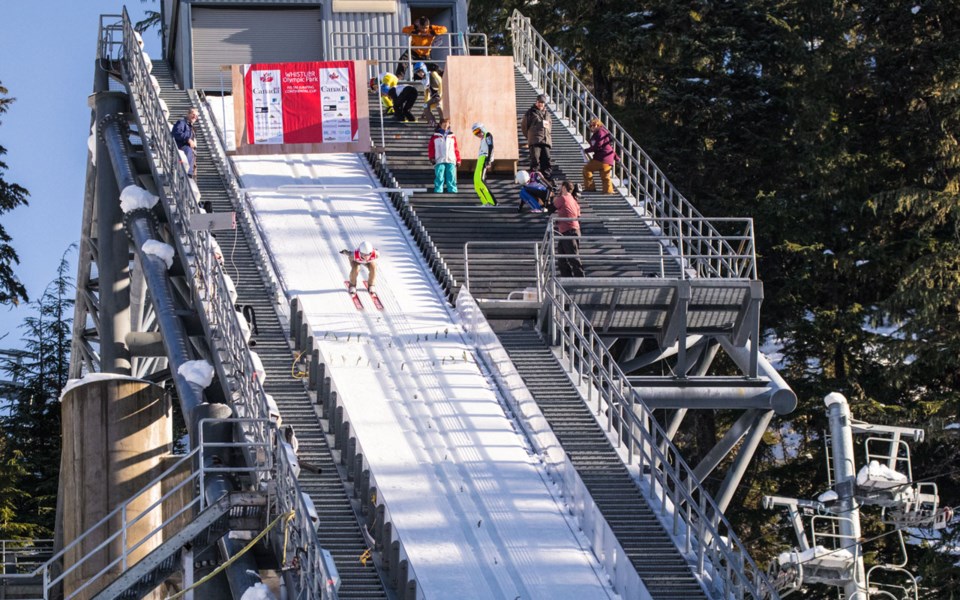 Cutline: JUMPING UP Whistler Sport Legacies has snowmaking infrastructure for ski jumping but recently received a $150,000 grant to investigate expanding its capacity.Photo courtesy of the Black Tusk Nordic Events Society

As it gets set to host provincial, national and international Nordic contests leading up to the 2023 FIS World Nordic Junior and U23 World Ski Championships, Whistler Olympic Park has landed some funding to investigate additional snowmaking technology at the Callaghan Valley site.

Whistler Sports Legacies president and CEO Roger Soane said on Jan. 5 that the $150,000 grant from the Federal Gas Tax Community Works Fund in partnership with the Squamish-Lillooet Regional District will be used primarily to look into the snowmaking possibilities through engineering studies, researching equipment and possibly purchasing a snow gun or two.

“It’s been in the works since 2010, to be quite honest,” he said. “It’s something I think that was always envisioned when the park was built, but with VANOC’s [Vancouver Organizing Committee for the 2010 Olympic and Paralympic Games] budget constraints towards the end of the build, it was put on hold.”

Soane noted that the park currently has snowmaking capacity at its ski-jumping site due to the need for consistent snow on the landing hill, but is eager to harness the technology for its cross-country offerings in the form of a track two to four kilometres in length. The park currently stores snow over the summer to use for skiing in the early season, dubbed Callaghan Gold, but the ability to make additional snow would be a boon.

Soane anticipates that, if snowmaking is feasible, it would be used to supplement Callaghan Gold, not replace it. Having the technology at the ready is key for landing high-level events.

“In the new FIS agreement, the ability to make snow is one of the things they look at when they’re looking at venues for high-performance competitions. They don’t like to have things called off because of weather,” he said. “It certainly will help us secure more events.

“Although we have a great facility and consistent snow, in the early season, sometimes we have races planned and it’s really touch and go.”

Soane is doubtful that snowmaking would be ready for next winter, with the planning stage expected to take at least six months, while also noting the red tape associated with the undertaking.

“We’d have to get authorization to draw water from the river. We have a licence to draw water right now but the flow would increase if we went to snowmaking,” he said, adding that crews would also need to construct the infrastructure. There’s also the question of where funds would come from, with the project estimated to cost $1.5 to $2 million.

Soane added that the park will take environmental concerns into consideration throughout the process, including looking at chemical needs, power requirements and the water-use needs from Callaghan Creek.

In other Nordic news, the park will, hopefully, host some high-level cross-country skiing action this winter.

The Black Tusk Nordic Events Society announced on Jan. 4 that it will host the Teck BC Cross-Country Championships at Whistler Olympic Park from March 20 to 22.

The whole Nordic season has been in turmoil because of the COVID-19 pandemic, as Black Tusk was originally supposed to host the NorAm World Junior/U23 Championship Trials this weekend, from Jan. 7 to 10. When Nordiq Canada pulled the plug on trials in late November, the group downsized the event into a BC Cup contest, which was subsequently postponed. Black Tusk chair Norm Laube said on Jan. 4 that the group hopes to have clarity regarding the event in the coming weeks.

Laube added that Black Tusk, by landing the provincials, is thrilled to plan to host something larger than a regional event after all.

“Our competition committee and our organizing committee, we were all geared up to put on the World Junior trials, which would have happened this coming weekend,” Laube told Pique. “With that not happening, we’re glad that we’ve got the provincials to focus on for the teams.”

With the framework from the national trials in place, Laube is feeling confident the provincials will be able to go ahead safely and successfully.

“We’re certainly hopeful that, at that time, travel within the province will be allowed for competition,” he said. “It’s a very distanced activity. There’s a lot of space between the athletes and we’re able to control the start and finish.”

Nordiq Canada announced on Dec. 23 that two Sea to Sky athletes, Whistler’s Benita Peiffer and Pemberton’s Joe Davies, will compete at the FIS World Nordic Junior and U23 World Ski Championships in Finland as part of the U23 and junior teams, respectively.

In addition to the FIS World Nordic Junior and U23 World Ski Championships in 2023, the group is set to host the FIS Cup Ski Jumping / Continental Cup Nordic Combined contest in December and the Canadian National XC Championships next season. n