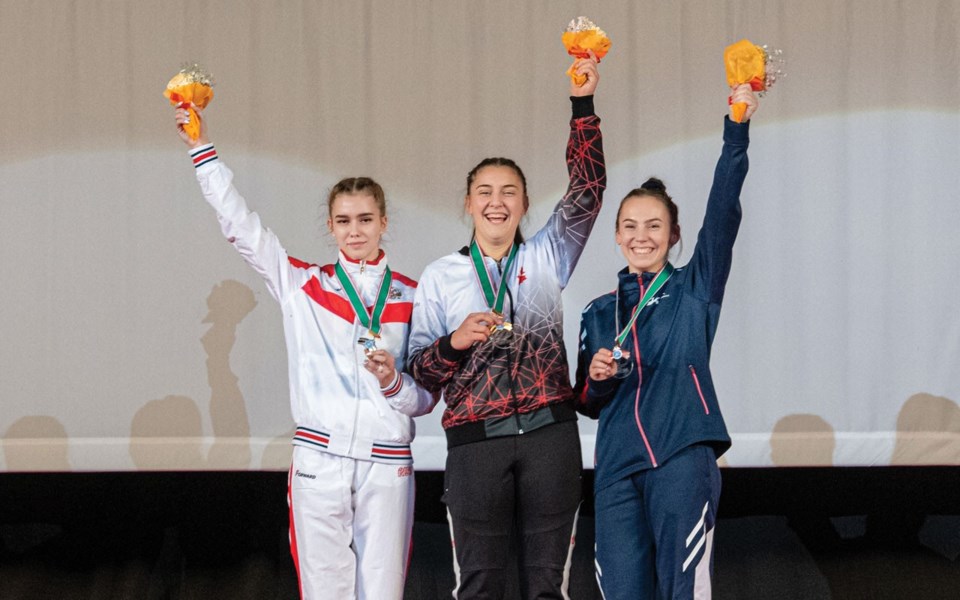 BOUNCING OFF THE WALLS Gabby Flynn (centre) celebrates her double mini trampoline with at the FIG Age Group Championships in Japan. <ParaStyle:CUTLINE\:CUTLINE Credit>Photo by Graham Dodd/Courtesy of Gymnastics Canada

Gabby Flynn may have momentarily thought about keeping her perfect record intact.

After winning her first-ever international contest, topping the women's 17-to-21 double mini trampoline event at the World Age Group Championships [WAGs] in Tokyo on Dec. 5, Flynn's Canadian teammates razzed her that she may as well quit while she was ahead.

"There was kind of a joke that I should just go home now and leave it at that one," said Flynn, who trains with Burnaby's Shasta Trampoline Club and recently moved to the area.

Flynn posted a two-routine score of 66.7 to finish 0.5 points ahead of runner-up Iullia Petrova of Russia and 0.8 points up on American Mikaela Hunter.

When discussing her approach to the competition, the 18-year-old said she kept it simple.

The double mini-trampoline competition consisted of four different passes, each comprising of two different skills. While Flynn had three of them down pat, she had to pull out one that was made up of newer skills.

"One of the passes I'd never even done before. I've only ever completed it around four times. One of them was really new and the others were hard, but I've been doing them for a while," she said.

The newer pass Flynn completed was the Rudy out, a front double flip with one-and-a-half twists to a double backflip, which helped to push her over the top.

"After landing, I didn't know I had won," Flynn recalled, noting a couple friends tried telling her that her chances were good after landing her final pass.

Flynn sat fourth after her first routine, 0.3 points back of leader Susan Gill of the United States. Gill's performance slipped in the second attempt, leaving the door open for Flynn to leapfrog the competition.

"[I felt] pretty good. It's still a pretty high position, so I felt calm. I knew what I was doing and knew that if I just did it, I could stay a little higher, [closer] to the top," she said.

Flynn said she started out a little groggy, feeling disappointed in her warmup and even though she qualified in second, acknowledged it still took a while before it her that she was competing on the world stage.

"I was pretty out of it by my first pass. I still didn't believe that I was at WAGs competing in front of the world until I got to finals and got to the second round of competing," she said. "I'm already doing well, and I wanted to keep doing well. I got nervous."

Even so, Flynn stuffed down any butterflies she felt, tying for first in her second attempt to take the win.

Flynn competed in two other events in Japan, placing 10th in individual trampoline and teaming with Maja Bonham to take 13th in the synchronized contest. Only the top eight entries qualified for finals.

"I focused really hard on the other events as well and synchronized and individual trampoline were really awesome, even though I didn't make finals, but watching the other people was honestly insane. I know I need to improve my skill level, get it higher and make it harder."

Flynn enjoyed the experience of competing at an International Gymnastics Federation event, noting that it ran on time and was well organized. She also appreciated watching fellow gymnasts from around the world do their thing.

"Watching the other countries was my favourite part, getting to see what type of stuff they're doing, what type of skill level they're at. Some of the girls we were up against in trampoline I've seen in past years. They were just incredible and I knew them from watching other competitions on YouTube or something," she said. "Seeing them live and seeing what they were doing was really cool."

Flynn will be primarily competing on the provincial level for the remainder of the year.

With the national team going into an Olympic year in 2020, it's a quieter season on the international stage, but Flynn is eager to see what 2021 brings as she jumps headfirst into the 2024 quadrennial.

"I'll be better by then, and will hopefully do some World Cups leading into the World Games," she said.

Getting back into her home gym, Flynn is coming back with ideas of how she wants to ramp up her skill level.

"More triples," she said, noting that she expects her coaches to be game for that jump.

At the end of the competition, with Canada taking three medals overall, Gymnastics Canada was pleased with its haul.

"We had many great performances this week and it will be exciting to get to watch these young athletes grow, as they are the future of our sport," trampoline gymnastics program manager Niki Lavoie said in a release. "It was exciting for them to have the opportunity to compete in the Olympic venue, and it was a great way to end the competition by singing our national anthem."

Snagging a gold on the international stage in her final year before making the jump to senior-level competition, Flynn hopes her win will elevate her in the eyes of the national brass.

"It will increase my standing, I think," she said.