Whistler rider starts campaign for Queen of Crankworx in Rotorua

Astle to attend all three Crankworx festivals for first time
Mar 9, 2020 7:44 AM By: Dan Falloon 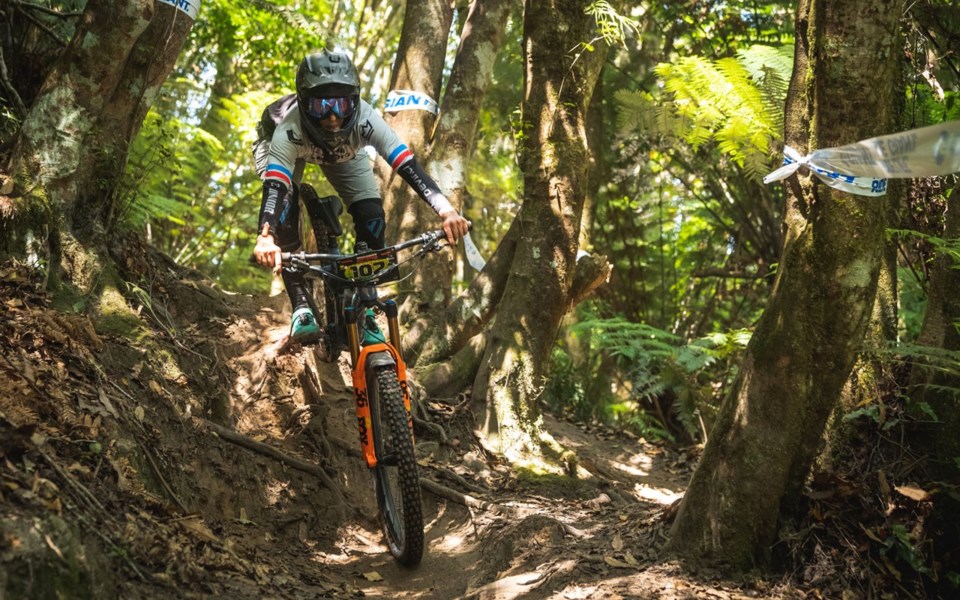 Georgia Astle competes in the Giant Toa Enduro in New Zealand on March 1. Photo by Kike Abelleira courtesy of Crankworx

Whistler's Georgia Astle has her eyes on a major Crankworx prize.

Starting with the first festival of the season in Rotorua, New Zealand, the 22-year-old is ramping up her participation in the Crankworx World Tour in 2020 with the ultimate goal of racing herself into contention for the Queen of Crankworx crown.

Astle's best results bookended her week, she started with a third-place finish in the Giant Toa Enduro on March 1 and wrapped with a sixth-place showing in the Crankworx Rotorua Downhill on March 8.

In between, Astle took an 11th-place finish in the Rotorua Air DH on March 4, a 13th-place showing in the 100% Dual Slalom Rotorua on March 5, and another 13th-place result in the RockShox Rotorua Pump Track Challenge on March 7.

Even with five events in a week, Astle still felt strong when speaking the day after competition wrapped, crediting her offseason work with TaG Cycling for preparing her well. However, she acknowledged that she's still in the process of regaining her tenacious racing mindset.

"The gym work I've been doing I really noticed in the downhill, which was on this really blown-out course," she said. "It was like doing however many hundreds of push-ups a day down the track. I thought, 'I can do this. This isn't too bad.'

"It's the bike confidence I'm lacking."

Despite requiring a little recovery time after the enduro, Astle said she was glad to have it done first, especially as it doesn't really move the needle in terms of the overall Crankworx standings.

"It's a fun race. I really enjoy doing enduro. All the other events in Crankworx were sandwiched in and actually counted," she said. "The enduro was more for fun and was just an extra event that I added on."

The course, however, was a challenge, as only two of six stages were properly gravity-fed, she said. That meant it was hard for riders to hold speed for most of the race's duration and, combined with tight transition times and hot temperatures, left competitors sweating.

"You just made it to your start, you have five minutes to drop, you grab a sip of water and then you pretty much jump into the stage and all of a sudden, it was pretty much the pedalliest stage ever. That was really hard," she said.

Being her first year loading up on Crankworx events, Astle knows the learning curve she's facing in the coming months. Still, she's seen how her fellow women have handled new events such as the CLIF Speed and Style, running for just the second time after debuting in Whistler last August, and she's eager for what she'll soon be able to take on.

"I wasn't really up for the jumps on my hardtail, my dirt-jump bike, but watching the girls, they improved so much and started throwing tricks on them," she said. "I'm pretty confident that by the end of this year, my riding will have skyrocketed because I'll have to do these events that I wouldn't normally be doing. I'm really excited by that."

Apart from her usual downhill and enduro contests, Astle said she enjoyed the dual slalom, which requires different skills in different areas of the course.

"Sure, the BMX girls have a huge advantage with gate starts, but there's so much of a mountain-biking aspect within it. There's jumping, cornering, all these skills that I think makes it the coolest race format," she said.

While the pump track is also fun, Astle said those with BMX backgrounds are strongly favoured—so she plans to be a regular at the local BMX courses in preparation for future stops in Austria in June and at home in Whistler in August.

With her expansion into so many disciplines this year, Astle noted that she's welcomed an extra set of hands with her on tour this year, as she has the help of a mechanic through her Unior Devinci Factory Racing Team.

"This year, I have a bit of a step up with my support, so I had some helping me on the mechanic side of things," she said. "Otherwise, it would have been crazy having to deal with three bikes."

Also in Rotorua, Squamish's Ainhoa Ijurko made her Crankworx pro division debut, finishing 15th in the Air DH, 16th in the dual slalom and seventh in the downhill.

In the Air DH, Kintner scored the women's win over Anneke Beerten of the Netherlands and defending Queen of Crankworx Vaea Verbeeck of Canada. On the men's side, Blenkinsop bested Czechia's Tomas Slavik and New Zealand's Matt Walker. Meanwhile, Cameron Bragg won the invitational 10-to-12 female division, Lisa Mason took third in the senior 19-plus female event, Boucher took fifth in her category and de Vall placed 19th in his division.

As for the dual slalom, Kintner got past Canadian Casey Brown in the big final, while Verbeeck earned third by topping Australian Danielle Beecroft in the small final. On the men's side, American Kyle Strait bested Canuck Bas Van Steenbergen for gold, and in the small final, Walker emerged over American Collin Hudson. Meanwhile, Boucher ended up taking third in her event.

In the speed and style, France's Tomas Lemoine downed American Greg Watts in the men's big final while in an all-American small final, Garret Mechem got past David Lieb. Goldstone also competed, taking 13th overall. As for the women, Jordan Scott of the United States topped Verbeeck and Kintner for top spot.

It was the second win in a row for Scott, who beat Kintner in the pump track women's final as France's Mathilde Bernard bested New Zealand's Shania Rawson for bronze. On the men's side, the United States swept the podium as Tommy Zula emerged in the big final over Hudson, while Austin Warren edged out Van Steenbergen in the small final.

In the King of Crankworx overall chase, Van Steenbergen (202 points) holds a slight advantage over Strait (194 points) and Blenkinsop (180 points) while in the Queen chase, Kintner has a strong start in wresting back her title with 420 points to Verbeeck's 285 and Scott's 227. Astle sits 11th with 72 points.