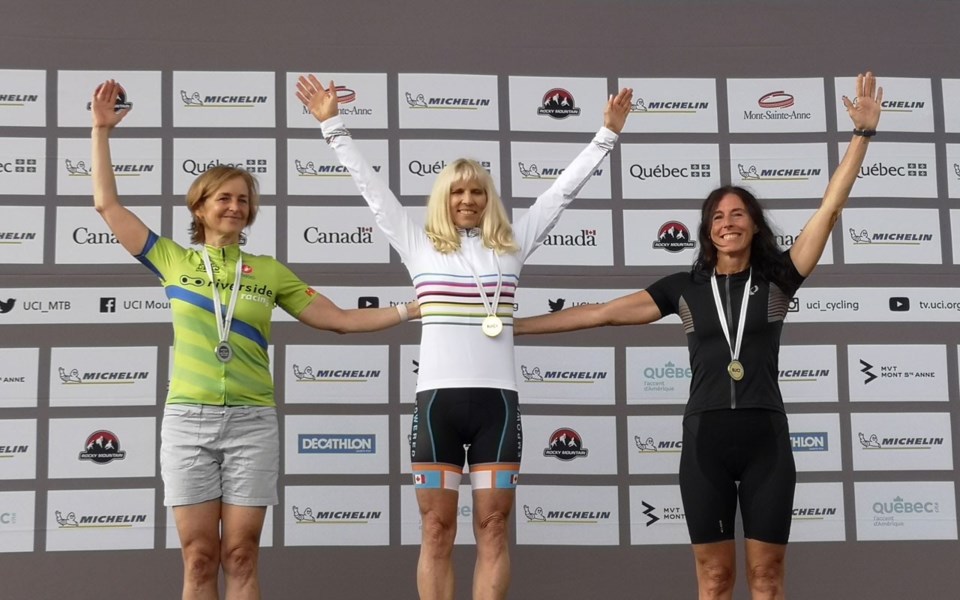 Whistler's Cathy Zeglinski made a triumphant return to cross-country racing action in Quebec on Aug. 23.

Competing in the master women 55-to-59 age division at the UCI Mountain Bike Masters World Championships at Mont Ste. Anne, Que., Zeglinski toppled the competition, besting runner-up Michele Satrowsky of the United States by five minutes and 25 seconds (5:25) and fellow Canadian France Arsenault by 8:21. It was her first Olympic-distance race in more than two years.

Zeglinski explained that one of the biggest challenges stemmed from the fact that several other divisions raced at the same time, so she had to beat an entire pack to the singletrack, not just the four other racers in her category.

"We started all together, but because, we're not seeded, I started behind the younger women. There was basically a fight for the first corner, as there always is in cross-country biking, to get up and into the trails," she said. "My whole focus was to stay, as much as I could, with the leading women and get into the singletrack first.

"The course is quite tight and it's critical to get that first entry."

The plan worked, and Zeglinski had opened up a gap of roughly 90 seconds after the first lap. She never looked back.

"We had 10 groups on course, and it's a tight course, a 4.6-kilometre course all at the same time," she said. "There was a lot of passing and a lot of passing strategy involved. You could only tell by the colour of the plate what category someone was in.

"You just put your head down and, basically, when you see women, you're trying to stay with them or stay ahead of them."

Zeglinski credited the guidance of Team Squamish head coach Mike Charuk—both in the lead-up to the race and on course—for her win. Charuk was telling her the gaps she had on her opponents, so Zeglinski knew how to pace herself as the race progressed.

While the course was different from what the elite riders will take on this week, as it had fewer technical elements, Zeglinski said it had enough technical sections to play to her strengths.

Zeglinski previously won masters gold in 2013 in South Africa even after sustaining a broken collarbone during the contest, raced again in 2014, but hadn't returned to the event until this year, as it was being held on home soil. It was also her first Olympic-distance cross-country race in roughly two-and-a-half years.

Zeglinski was also motivated by the return to the Sea to Sky of her former training partner, Alessandra Keller, a former Howe Sound Secondary student who went on to become a junior world champion.

"I had to be race-fit to ride with her," Zeglinski chuckled.

Zeglinski is staying in Quebec acting as a "den mother" to four youth riders under Charuk's tutelage while they will be competing in junior divisions this week. Zeglinski, who used to run a medical practice in Whistler and recently moved back to town after some time away, is starting a new business called Empowered Med. The business will meld her passions of medicine and sport.

Among those competing from her house is Squamish's Holden Jones, who has been to two World Championships as a junior and is competing at the U23 level for the first time.

"It's all going really great," said Jones, the Canada Cup series leader. "The course [in Quebec] is really technical, but it suits us all really well."

World Championships will be Jones' first international race of the year, and he's not exactly sure what to expect in a new age division.