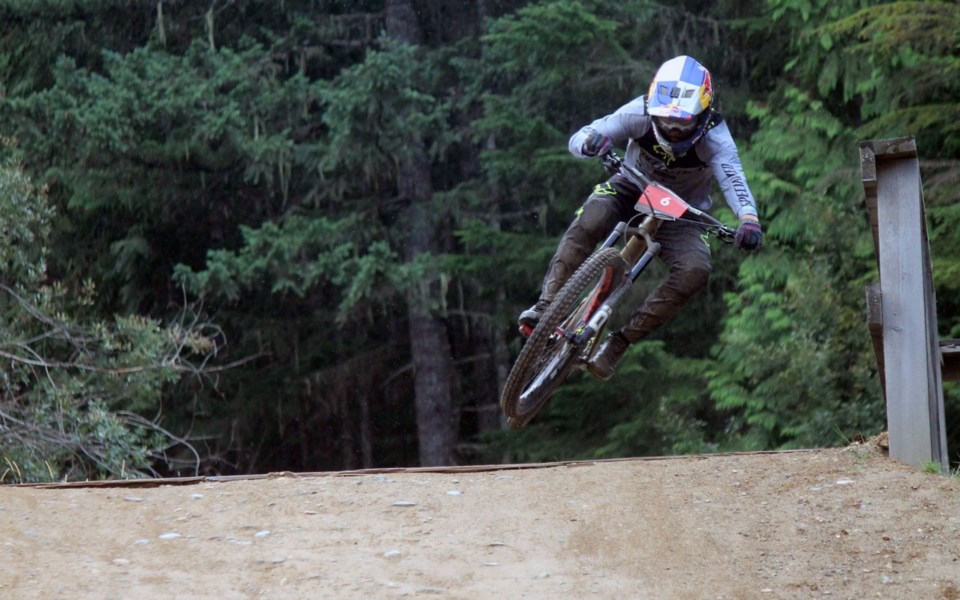 It was going to be difficult for Finn Iles to match the magic of his first Crankworx Whistler race win, but he sure tried his best.

After winning the 2018 Air DH on his 19th birthday, the Whistler racer came out and defended his title in a commanding way on Aug. 13, beating American Mitch Ropelato by 2.47 seconds and New Zealand's Sam Blenkinsop by 3.23 seconds.

"This year was a little bit different because it was raining and I wasn't sure if I could push as hard, but I dropped in to the first few corners and it wasn't too bad," he said. "I went for it, and that's how it is on A-Line: if you go as fast as you can, you normally have a good result."

Iles was the last rider to drop, and he made it clear why he was the defending champ, handling one of the Whistler Mountain Bike Park's most prominent tracks with ease, cracking the four-minute barrier in three minutes, 57.04 seconds (3:57.04). Though some rain started to come partway through the race, it had no ill effect on Iles, who turns 20 on Aug. 15.

"The whole bottom section, I knew it was pretty dry, so I went full gas and rode strong," he said. "I'm thrilled to put that much time between me and second place. It just shows that I'm strong, especially on this course because it's so physical, and ready for the races coming up."

It's been an up-and-down season for Iles on the UCI World Cup downhill circuit, with Iles sustaining more than his share of crashes putting him near the back of the pack in recent events. However, with a win at the Canadian Championships and now at the Air DH, he feels he's back on track to finish strong.

"Whenever I come home and get a win, it adds a little bit of confidence," he said. "I know that I am fast. I just need to finish and then I'll get a result."

On the women's side, another familiar face topped the podium as Jill Kintner of the United States won gold for the seventh consecutive year.

Kintner skipped the first two Crankworx festivals of the season to focus more on enduro riding, but is back to make some noise as one of her favourite tour stops.

Kintner has been battling illness this week, noting that she'd been coughing steadily since crossing the line, but managed to best Whistler's Georgia Astle by 1.21 seconds and Austrian junior Valentina Holl by 3.05 seconds.

"I didn't know if I was going to be able to do it. It was one of those one-day-at-a-time, one-lap-at-a-time [things]," Kintner said. "It felt not too bad. I rode my trail bike and it was really smooth this year.

"After doing all the enduro stuff, this felt short and quite easy, actually. I gave it what I had and I knew I was riding good, so it was nice to get a win."

Astle, meanwhile, has now podiumed in two consecutive events after winning the Garbanzo DH on Friday night. A year after finishing just off the Air DH podium in fourth, Astle was thrilled to rise onto it.

"I'm very happy about it. I'm stoked," she said. "I definitely didn't have any pressure on myself for A-Line because it's A-Line, it's a weird one to race.

"I had a smooth run, didn't necessarily feel fast, but I think it's good that I kept it smooth and didn't crazy overshoot anything. I was pretty consistent."

The pro women dropped before the rain hit, and Astle said those conditions suited her riding just fine.

"The track was so fast today. It was perfect," she said. "I nailed all the berms. I was on my trail bike. I was cornering really well today through all the bomb holes.

"The only section I messed up with in the technical section, the last one. I stalled out for a bit and was in the hardest gear trying to pedal up a bit. Other than that, it was a pretty smooth run."