Curtis Keene posts top men's time, while Sarah Leishman and fellow Whistlerites own women's podium
May 17, 2014 4:45 AM By: Brandon Barrett 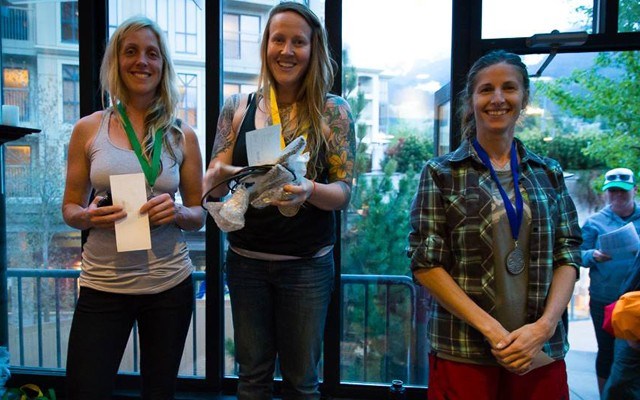 Whistler owned the podium on the women's side, with Sarah Leishman taking the win and $250 top prize, while fellow locals Katrina Strand and Carrie Metzler finished second and third, respectively.

"It was a fun event and the race was super pedaly (sic), and I was surprised because Katrina (Strand) is really fit this year, so I was surprised it worked out," Leishman said the morning after the race, calling the race's final stage "really challenging.

"(The design team) worked really hard to be creative and to make the course interesting and the result was a pretty challenging, pretty physical three stages, but it was still fun," she added.

On the men's side, American Curtis Keene, a regular at the Whistler bike park, took first place and $750 for his performance. Nick Geddes, who will pull double duty this weekend, competing in the Pemberton Enduro on Saturday, May 17, came second, while fellow Whistler local Jesse Melamed placed third.

The resort's Bowen Irvine, 16, was the fastest racer in the Junior division, open to teens aged 13 to 18.

Race times were not available as of press time.