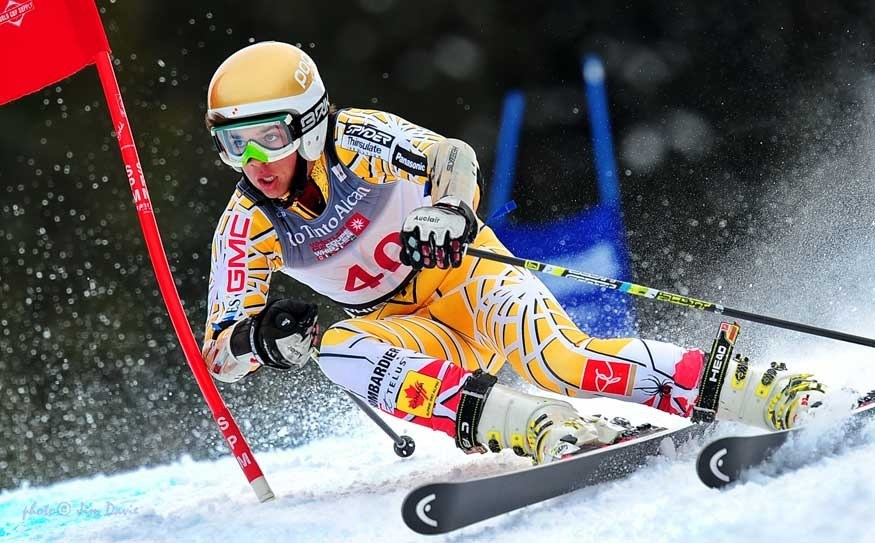 jack squats Jack Crawford, a newcomer to the Whistler Mountain Ski Club this season, posted one of the team's outstanding Whistler Cup results over the weekend. Photo BY jim davie

In a field of over 100 racers, Iles kicked off his Rio-Tinto Alcan Whistler Cup weekend with a win in the boy's K1 (age 11 and 12) kombi race with a time of 41.49 seconds. Hayata Wakatsuki of Japan was second in 42.04, followed by Kuba Sudomericky of Devil's Glen in Ontario.

Other Whistler skiers in the top 15 were Kasper Woolley in eighth and Kyle Alexander in ninth.

In the women's K1 Kombi, the top Whistler skier was Katie Fleckenstein in eighth, out of almost 70 racers, in 36.84. The podium was international, with Asami Katagiri of Japan placing first in 32.96, Carlotta Saracco of Italy placing second in 34.47 and Chelsea Kumono of Japan in third in 34.58.

This season the organizers of the Whistler Cup opted to skip on FIS sanctioning for the K1 races, opening it up to clubs as well as national sport organizations. That way teams could send racers without pre-qualifying athletes at FIS events.

On Saturday, the K1 girls raced giant slalom and the K1 boys slalom.

In the GS, Katie Fleckenstein moved up to fourth place overall behind Carlotta Saracco, Asami Katagiri and Chelsea Kumono. Mollie Jepsen of the Whistler Mountain Ski Club was ninth.

In the slalom the top three were Kuba Sudomericky, Liam Wallace on the Sunshine Alpine Racers and Hayata Wakatsuki of Japan. The top Whistler skier was Griffin Smith in 13th. Finn Iles was one of three Whistler skiers not to finish the first run, along with Kyle Alexander and Jack Forsyth.

The teams switched courses on Sunday, with the girls racing slalom and the boys GS.

Finn Iles was back on top in the boys race to win his second medal of the weekend, followed by Liam Wallace and Noel Louis Philippe from Quebec. Kyle Alexander was seventh.

In the girls' slalom, Laurence Huot of Quebec placed first, followed by Brianna MacDonald of Ontario and Kristina Natalenko of Grouse Mountain. Anna Gosney moved up to eighth for Whistler while Lucy Turner placed just outside the top 15 in 17th.

With two gold medals, Iles won the Dave Murray Award presented to the top Canadian male at the Whistler Cup.

In K2, the weekend opened with a super G, followed by slalom and GS events.

In the men's super G the win went to Australian racer Oliver Thompson in 1:00.70, followed by WMSC skiers Cameron Alexander and James Crawford in 1:01.24 and 1:01.38 respectively. Other WMSC skiers in the mix include Cooper Yates in fifth, Riley Seger in ninth and Max Peiffer in 13th.

"I feel great about my race, I'm extremely happy," said Alexander. "My run felt pretty good but it was pretty sketchy in some parts. On the first jump I landed on the flats, got a bit too much air on that, but otherwise I felt really good the rest of the way down."

In the girls' super G, the win went to Lorena Kaeslin of Switzerland in 1:02.36, followed by Jessica Hilzinger of Liechtenstein in 1:02.73 and Guro Hvammen of Norway in 1:02.99. The top Canadian in fifth was Stephanie Currie of Toronto.

From the WMSC, the top skier was Squamish's Mikayla Martin in sixth.

On the second day, the boys raced slalom and the girls GS.

Sam Mulligan of Grouse, one of the top K2 racers in Canada this year, was the top Canadian in the slalom with a third place finish behind Marco Michel of Switzerland and Paolo Padello of Italy. Mulligan finished two runs in 1:23.88, just three one-hundredths back of Padello. Michel had a solid lead in 1:23.09. The top Whistler skier was Cameron Alexander in 32nd.

In the girls' GS, the win went to Jessica Hilzinger of Liechtenstein in 1:29.26, followed by Beatrice Barbagelata of Italy and Narumi Katagiri of Japan. The top Canadian was Stephanie Currie from Toronto in ninth place. Mikayla Martin was one spot back in 10th overall.

On the final day the boys raced GS and the girls slalom.

Sam Mulligan led Canada once again, this time moving into second place overall. Paolo Padello of Italy won the event in 1:26.29, followed by Mulligan in 1:26.55 and Giacomo Scaglione of Italy in 1:26.72.

"I was fifth after the first run and the second run was my last run of the year so I decided to go for it and try to have fun with it," said Mulligan. "The conditions were pretty awesome for this time of year, so I just went for it and gave it my all, and it turned out great."

James Crawford and Cameron Alexander were eighth and ninth respectively.

In slalom, the win went to Andreja Slokar of Slovenia in 1:19.21, followed by Aline Danioth of Switzerland and Guro Hvammen of Norway. Mikayla Martin was the top Canadian racer in sixth place, with Stephanie Currie in seventh.

Following the weekend of racing the Nations Cup trophies were handed out to the top countries based on points. In K1 the award went to Japan, while Switzerland took the K2 award.

This was the 20th anniversary of the Whistler Cup, with over 350 racers and 21 nations taking part. Members of the national team were on hand throughout the weekend, including Robbie Dixon, Michael Janyk, Manuel Osborne-Paradis and Erin Mielzynski. Tina Maze of Slovenia, the Crystal Globe winner for giant slalom this season, was also part of the weekend as a special guest.