New emphasis on skills development as rankings removed for U12 and younger
Sep 18, 2013 9:00 PM By: Andrew Mitchell 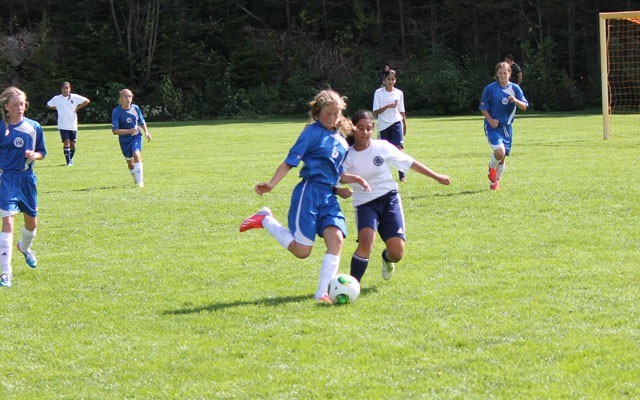 GAME ON The lack of scorekeeping, or the fact it was an exhibition game, didn't stop Whistler's U12 rep team from playing hard against Marpole on Sept. 8. Photo by Andrew Mitchell

As Whistler's young soccer players kick their way into the fall competitive season, things are a little different for players at the Under 12 (U12) level and younger.

As you might have heard, younger teams across the province will no longer be keeping league standings or tournament standings, or keeping score in any official way. That includes tournaments as well.

The new policies originate at the top level via Canada Soccer and a new Long-Term Player Development (LTPD) model that emphasizes skills and participation over winning and losing.

It's a model that Philippe Melun, head coach for the Whistler Youth Soccer Club agrees with.

"We don't want to take the competition out of the game, because the kids, no matter what age they're playing at, they will always want to score more goals than the other team," he said. "What we really want is to take the competition out of the coaches. Some coaches are so focused on winning the league and finishing first... they want to play the big players, the strongest players, all the time.

"There's more of a focus on working on players (under the LTPD model) than winning the league. If you're always playing the strongest players at key positions you might win the games, but that doesn't make for having a lot of good players at the end of the day.

"One day some of the smaller kids are going to catch up in size and speed, but they won't have the experience or skills to play well. Maybe they won't play soccer anymore and will have moved on to something else."

As an example of what could be lost with a win-at-all-costs approach, Melun brought a photo of Lionel Messi of Argentina when he was a U12 to the WYSC's coaches meeting at the start of the season. Messi, considered to be one of the greatest players in the sport, was easily the shortest player on his youth team growing up but a new focus on skills development in South America ensured he was given a chance to develop as a player.

Melun said the South American programs, and the programs in Spain, changed everything in the sport.

"Spain changed the way soccer is played," said Melun. "In the past soccer used to be a physical game with strong players, and someone told Spain that if they wanted to win on the World Cup then they would need to work on skills because as players they were not very big. So that's what they started in Spain 15 years ago, working on skills. They took away league standings for younger age groups and started playing on a small field with small teams for the longest time they could. The result was all these small players that are very skilled and play beautifully, instead of kicking hard and running fast like in the past.

Melun said the new system will focus more on touches — the number of opportunities players get to touch and handle the ball. Under the old model a player would touch the ball 500 times in a practice, but with the new system each player can make thousands of touches in the same amount of time.

As well, without keeping score or standings, Melun says players are more likely to be creative on the field and try new things, without worrying about consequences or letting the team down if it doesn't work. For example, a player is more likely to try to dodge a player one-on-one to create a scoring opportunity, versus passing the ball out of fear of making a mistake. Those skills make a huge difference when players get older.

While developing skilled players is one of the main goals of the program, Melun also said another important goal was to keep more players in the sport. Players who don't get a lot of attention or field time are more likely to quit.

"The big problem is that in Canada 85 per cent of kids drop soccer by age 16," he said. "If you have 50 or 60 players in an age group and you're only developing 12 of them (through select teams) and the other 50 don't progress or quit, then it becomes hard to field teams. What Canada Soccer wants to do is develop all 50 or 60 players and keep them in the sport as long as possible. The more people you have playing at all levels, the better you do internationally."

Melun said that Whistler parents have been very supportive of the changes. The kids themselves love it, he said, and have played just as hard over the past few weekends even though the games didn't count in any league standings.

Players were more relaxed, he noticed, and rotated on an off the field more often.

The coaches were a harder sell with the LTPD model, although Melun said about 95 per cent are on board now.

"Some of the coaches — well, they don't hate it, and I think they're starting to realize that they can now focus more on the players than the team," said Melun.

"Let's face it, none of these teams is going to the World Cup — but we could have a few players make it to the World and maybe that's what we need to be focusing on.

B.C. isn't the only province to get on board with the Canada Soccer model, with soccer associations in Alberta, Manitoba and Ontario also following suit this year. Other provincial associations are expected to follow. Most European and South American countries are aready following similar programs as well.

The national long-term development model is called "Wellness to World Cup" and focuses on the seven stages of player development, from participation to competition. It recommends activities and training activities for all development groups, with a focus on keeping people involved with the sport. It also says when and how kids should be identified for high performance programs. For more, visit www.canadiansoccer.com.