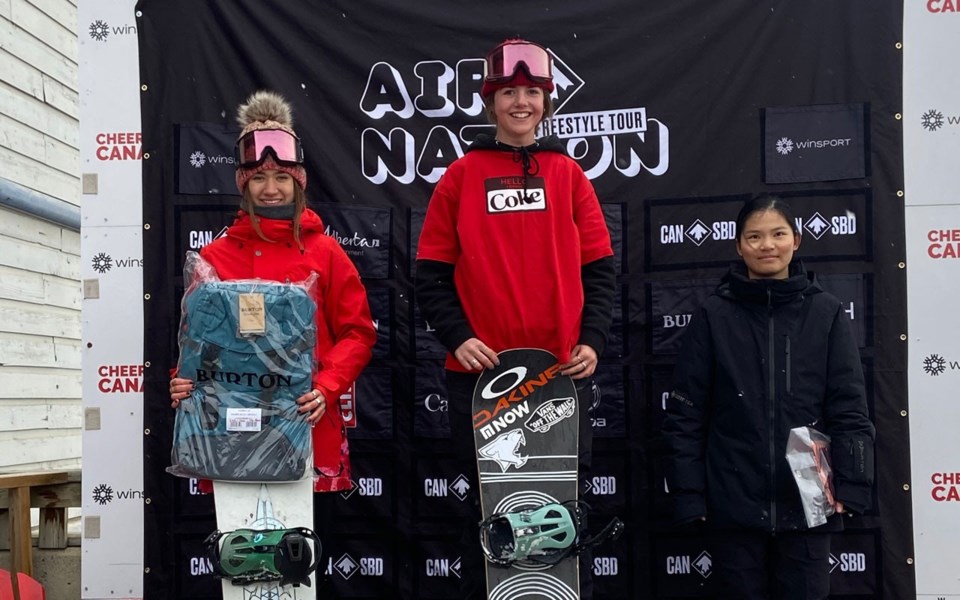 In what turned out to be the last contest of the season before the rest of the national championships were cancelled to prevent the spread of COVID-19, club members Jacob Legault and Juliette Pelchat stood atop the podium.

For Legault, the triumph capped a strong season, his first as part of Canada Snowboard's NextGen team. Legault landed big tricks on all three jumps, pulling off, in order, a switch backside 900, backside double cork 1080 and a frontside 720.

"I wasn't expecting to win. I was just riding with all my friends and I thought that anyone could have the opportunity to win. I was super stoked to put down a good run on my second run and take the win," he said.

Legault posted four top-10 appearances on the NorAm Cup circuit in seven starts this year, including a slopestyle win at Sun Peaks. Through the national program, he attended camps in Switzerland and Colorado and said the opportunity to work on his runs before the season was a major boon.

"We had a chance to dial all our tricks down and it made all of us pretty strong for the contest season," he said. "I've been progressing really well this year, so I think this is a really good year for me.

Though faced with uncertainty related to the COVID-19 outbreak, Legault is eager to get back for next season, including possibly Australia and Switzerland for camps if it is safe to do so. Legault anticipates hitting the NorAm Cup tour once again with the chance of a World Cup or two thrown in.

The 16-year-old Legault has experience at a pair of World Cups, having taking 24th in big air in Quebec in March 2019 and finishing 51st in slopestyle in Calgary this past February.

"The World Cups that we've had are pretty huge for us. You're not stressed out about winning or anything, so it's really good experience. You just take it all in," he said. "It's just fun to snowboard and compete with your favourite riders of all time. That's a pretty good experience, a way to look at it and learn from them."

Calgary's World Cup was a fun course, Legault said, in particular as it introduced him to the quarter-pipe in an event for the first time.

"I'd personally never ridden one in a contest, so it felt good to try out something new and see the different possibilities and the new lines I can put down," he said.

Though based in Montreal, Legault regularly comes to Whistler and is a member of the Whistler Valley Snowboard Club.

"I'm able to ride better because it has the best facilities—the best mountain, the best jumps. All the good riders are there," he said.

Pelchat was thrilled to defend her title while sharing the podium with friend Kamilla Kozuback, who was the runner-up.

"It was a great feeling. I was just so happy to be up there again for a second time," she said. "This year, I felt more pressure to land a run and just to my best again because the year before, I had won and I just wanted to do really, really well the second year just to defend my title."

The win was particularly gratifying for Pelchat because she landed a new run in competition for the first time to secure it. She had tried it, but couldn't quite get it, in a recent NorAm Cup contest in Ontario, but stuck with it and got it with a national crown on the line.

Pelchat said that one of her biggest goals entering this year was to land a 720 in competition and with that box ticked, she will try to double up next year.