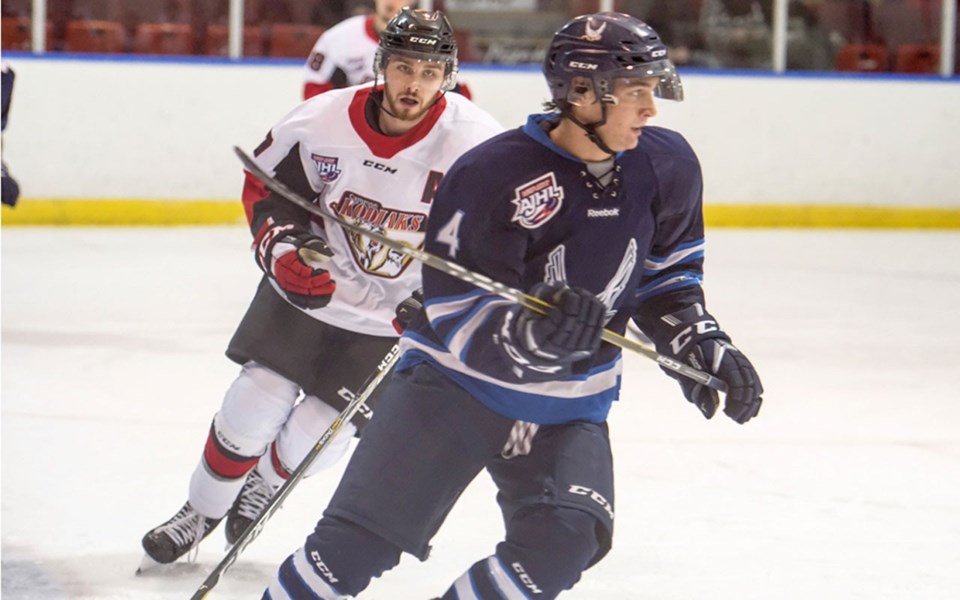 Growing up, Whistler's Owen Reith and Finn Withey played a lot of hockey together.

"We've been friends since we were babies, basically—our siblings are the same age, so we've been sort of family friends," Withey said.

Now, the 20-year-olds find themselves living in Banff and playing Jr. 'A' for the Alberta Junior Hockey League's Canmore Eagles.

"We've been playing hockey [together] since novice, and it's pretty cool to have that connection on the team," Withey said.

"We were apart for a few years when we first started playing junior, so it's nice to be back with [Owen]."

Reith is in his second full year with the Eagles, and has found success so far this season with linemates Alex Young and Connor Lyons, scoring four goals and adding five assists over the team's first 10 games.

The Eagles have posted a 4-6-0 record in that stretch.

"It's nice to come back to a team that you already know what's going on with the coaches and what they want to see, and have people that you know, and lines that you'll be playing on," Reith said.

"We started off middle of the pack, kind of. I think we should be a better team than we started, but I think we'll turn it around this next month or so, in October."

Reith is finding some chemistry with his linemates, having played about 40 regular season games together last year, as well as most of the playoffs.

"The coaches are really excited to have a full line coming back for this year, and it definitely helps a lot knowing what their tendencies are and what they like to do with the puck," he said.

Withey, who made the jump to Jr. 'A' in December last year from the Vancouver Island Hockey League's Comox Valley Glacier Kings after Reith put in a good word for him with the Eagles coaching staff, was sidelined at the start of the season with a separated shoulder.

Since cracking the lineup he's posted one assist in two games playing on a line with Max Giangualano and Eagles captain Tian Rask.

"I think it's a pretty good line ... Max is probably one of the fastest skaters in the league, so it's nice to have that speed, and he makes a lot of good plays so you just have to go to the net with him," Withey said, adding that Rask is a big body who brings a physical edge to the line.

"I think I play similar to that, so it's nice to sort of have that," he said.

Withey said the competition in Jr. 'A' is "definitely a step up," but credited some playoff time with the Victoria Grizzlies as helping ease the transition.

"It's a lot faster and a lot more skilled players ... a lot of people are going on to higher levels after this, like Division I hockey," he said.

"I'm still getting used to it, but I'm feeling a lot more comfortable now than I did when I first got here."

In making the adjustment, Withey said he's learned to keep it simple—those flashy, exciting plays that filled the net in Jr. 'B' just don't work against tougher competition.

"Everybody's on you a lot faster," he said. "So just skate hard, keep it simple and good things will come."

As for the Eagles, Withey said the team is starting to put it together after a bit of a rough start.

"I think we'll be a good playoff team. We have a lot of good, physical players which is important for playoffs," he said, adding that the goal is to finish "top three or four" and earn a good seed for the postseason.

"Hopefully we get on a playoff run like last year, or even longer," he said.