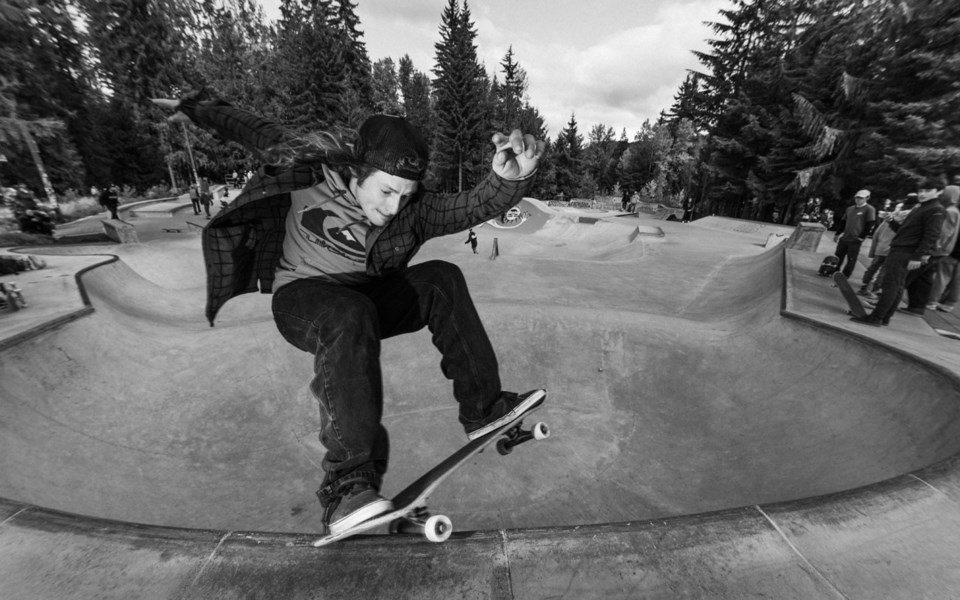 Will Kovacic competes in the Get Dat Dough skate jam on Sept. 29. Photo by J. Turbo Photography

Organizers declared the second-ever Get Dat Dough skate jam at the Whistler Skate Park on Sept. 29 a success.

Felix Dallaire estimated that roughly 50 competitors, mostly locals, came out to try to secure some of the $500 prize purse donated by local businesses.

"It's important not only for the skateboarders, obviously our concept was to give away cash prizes. It's nice for these guys," said Dallaire, who added the Whistler Skateboarding Association was also a great help.

"The level of skateboarding in Whistler is pretty high, and they are all really good skateboarders. Giving them a bit of money to help pay the rent or pay their bills or whatever is really important to them.

Though William Kovacic was declared the winner on the men's side, Kovacic was eager to heap praise on others who competed.

"There are four or five other dudes that I can think of as well that were deserving to be categorized as a winner," he said.

"Everyone had such different skills in the way that they skate. I skate transitional (hitting ramps and getting air) a lot better than a lot of other features, but there were a lot of skateboarders there so much more talented than me at skating ledges and skating rails and skating other features. It's hard to deem a champion in that sense."

Kovacic has lived in Whistler for five years, and being an action sports hub, has seen an impressive level of boarding throughout. However, the revamping of the skatepark three years ago was a turning point, as new features helped competitors elevate their skills further.

"There's always been a super high level of skateboarding and board sports in general with all the action enthusiasts coming to Whistler as a hub," he said.

"The new skatepark that got built three years ago has definitely made the park more of an attraction, so you see more people around the park."

Kovacic and Dallaire both lauded the community of local skateboarders, with Kovacic likening it to a family.

Dallaire, meanwhile, hopes to run the jam again in the future, possibly adding a band and, hopefully, bringing in more spectators. However, he hopes not to lose the grassroots feel of the event.

"The goal is not to make it bigger," he said.

As well, only one woman came out to compete, something that Dallaire hopes to change in future years.

"We didn't have many girls, but that's one thing, in the future, I want to really encourage ladies to participate," he said.

"It's a great era for girls' skateboarding. We see a lot of pro skateboarders and there are girls' gatherings for skateboarding all over B.C."

The Pemberton Stockcar Association wrapped the 2019 season at Pemberton Speedway on Sept. 28 and 29.

In his fourth season in the role, president Collin Scott said this summer was a solid one. "It was a good season. We had lots of out-of-town racers coming from all over the province," he said. "It was a great success."

Overall winners this year were Tom Parsons of Merritt in the hobby class while Stu Benner emerged in the hornet class.