Whistler's Janyk back in the points during Wengen slalom 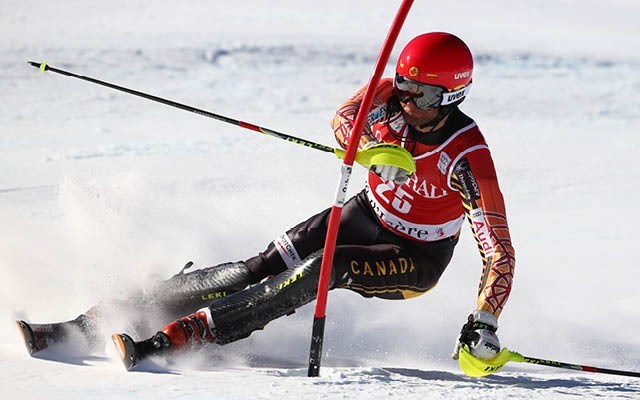 Skid snapped Mike Janyk returned to the points in the World Cup slalom at Wengen, Switzerland, after failing to make the second run in his previous two outings. He'll return to action at Kitzbühel, Austria, on Friday, Jan. 24.

Whistler's Mike Janyk returned to the points over the weekend, as he looks to build momentum before the Canadian alpine ski team for the Sochi Olympics is announced.

Janyk placed 23rd in the men's slalom at Wengen, Switzerland, on Sunday, Jan. 19, putting an end to a mini skid that had seen him fail to earn a result in the first two races of 2014.

The 31-year-old sat 25th after one run on Sunday but posted the 10th-fastest time on the second run to move up a couple of spots. He'll have one more race at Kitzbühel, Austria, this weekend before the Olympic qualifying period closes.

The two-time Olympian was the only Canadian to ski in the second run on Sunday.

The result moved him up to 27th in the discipline rankings, though he's still looking to improve upon the 20th-place finish during the season opener in Finland, which remains his best showing of the season.

If there's a good spot for him to do just that, it might be at Kitzbühel. Janyk has finished in the top 20 at the World Cup circuit's most notorious venue for six consecutive seasons and has three top-10 results there in his career.

Meanwhile, the Wengen downhill did not go well for the Canadian team on Saturday, Jan. 18, as no racers made it into the top 30.

The race program at Kitzbühel has been undergoing last-minute changes due to poor conditions and the slalom will now kick things off on Friday, Jan. 24 and the downhill has been scheduled for Saturday.

The Canadian para-alpine team in Sochi will feature a mixture of returning Paralympians, and some rising stars, when racing gets underway near the Black Sea resort in March.

Alpine Canada introduced the 13-skier team on Jan. 21, putting forward a roster of athletes that has won nearly 200 World Cup medals and a total of 14 at the 2013 world championships.

Among them are returnees from 2010 such as Whistler's Matt Hallat, a men's standing racer, and sit-skier Josh Dueck. Whistler sit-skier Caleb Brousseau is also headed to Sochi for his first Paralympic Games.

MOSHER BACK IN ACTION

Tyler Mosher finished sixth when returning to IPC World Cup para-snowboard cross competition at Colorado's Copper Mountain on Saturday. He would also place 12th in another race held Sunday at the same venue.

John Leslie, who recently moved to Whistler from Arnprior, Ont., captured a bronze medal in both races, earning the first two podium finishes of his career.

"It's nice to see the hard work and training pay off," said Leslie, a below-the-knee amputee, in a release.

Snowboarding will be a Paralympic event for the first time in Sochi this winter.

The Canadian luge team had another historic weekend during World Cup racing at Altenberg, Germany, capturing two medals from the same race for the first time ever.

Alex Gough slid to silver behind Germany's Natalie Geisenberger on Sunday while Kim McRae earned the first podium finish of her career by placing third. McRae had slipped back a spot from her fourth-place ranking on the first run, but watched two sleds behind her fall back even further as she moved up into a podium position.

"Standing in the finish area beside Alex, my heart was just hammering," said McRae. "I remember watching the Russian and saying to Alex, 'I could move into third.' I just started jumping for joy."

Meanwhile, Sam Edney, Gough and the doubles duo of Justin Snith and Tristan Walker finished second, behind Russia, in team relay on Sunday to make it a three-medal day for the first time in Canadian luge history.

The race marked the final team relay before the discipline makes its Olympic debut next month. The Canadian team is now at Sigulda, Latvia for the final World Cup of the season.