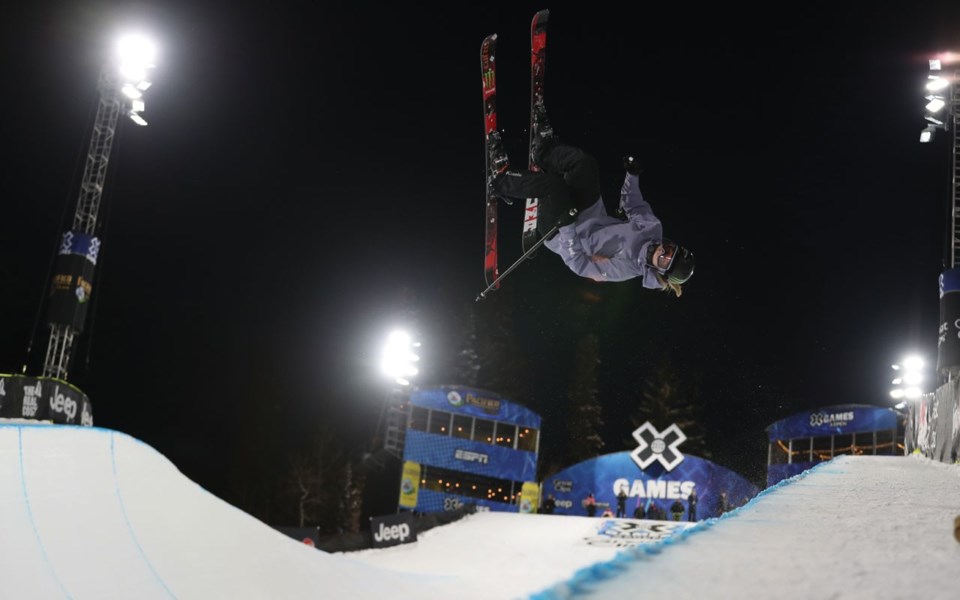 GETTING EXTREME Halfpipe skier Cassie Sharpe took third in her return event at the X Games in Aspen, Colo. on Jan. 25.

In the right circumstances, even an Olympic gold medallist can still get nervous getting set to drop in.

That was the case for Whistler resident Cassie Sharpe, who claimed top spot in PyeongChang in 2018, has eight FIS World Cup victories and a pair of Crystal Globes to her name.

But after sustaining a concussion during pre-season training in New Zealand, Sharpe opted to sit out the first two World Cup events of the season, returning for the X Games in Aspen, Colo. in late January.

Sharpe credited her crew with helping to support her as she ensured that she was ready to return, both physically and mentally, though she acknowledged feeling pressure coming back to X Games as the defending champion.

"It was extremely nerve-wracking. It was always the plan to try to pass all the protocol and make sure that I was mentally and physically OK from the concussion," she said. "I didn't really realize the amount of pressure I was putting on myself to come back at X Games after winning it last year. I was going into it with a lot of nerves, but I'm stoked on how it turned out."

Being the second year of the four-year Olympic quadrennial, this season has the lowest stakes of the four with no World Championships, while Olympic qualifying ratchets up in intensity in the 2020-21 campaign. As such, Sharpe was given extra encouragement not to rush her return.

"This year, when I was recovering from my concussion, my coach Trennon [Paynter] just kept on saying 'This year does not matter. If you're not mentally or physically able to come back this year, it really doesn't matter,'" she recalled. "Keeping that in mind throughout this season is just to have fun and do the best that I can do, and enjoy myself before the pressure of qualifying for the Olympics comes on next year."

Still, ever the competitor, Sharpe was eager to get back at it, especially after keeping an eye on the contests held while she was away.

Ultimately, Sharpe returned to snow on Jan. 7, but lost the bulk of her training time to a cold snap in Calgary. Still, she podiumed on Jan. 25.

"We were supposed to be in Calgary all the way up until X Games, training the whole two weeks that we were supposed to be there, but the second week we were there, it got so cold that we all just left," she said. "The mountain was closed Monday to Friday because it was negative-30-something.

"I had about half the training that I thought I was going to have."

At this past weekend's contest at California's Mammoth Mountain, Sharpe came up with her best run right out of the gate, scoring a 90.00 that was good enough to hold off Russian Valeriya Demidova's 89.00 and teammate Rachael Karker's 88.00.

"You always want to lay down your hardest run first run and set up a good score so that you can try to build on it," she said. "It's kind of a staple run for me. I added in a flair and a couple of switch hits, which I wasn't doing before, but after a little bit of training, it's coming together."

Sharpe said the conditions at Mammoth were as good as she's ever seen them, as World Cup stops there tend to be fraught with challenging environments.

"We've never had it where it wasn't windy or snowing or a blizzard," she said. "It was bluebird with minimal wind, and we were all just having a good time. You could see that from the calibre of our contest, but you could especially see it from the calibre of the men's contest with all the crazy runs that got thrown down spur of the moment with a good pipe."

In the men's competition, Canadian Noah Bowman took second with an 88.60 while being sandwiched between two Americans. Aaron Blunck ran away with top spot with a 97.20 tally while Lyman Currier's 88.20 earned him third.

No Canadian slopestylers hit the podium, though there were some strong results. In the men's contest, Etienne Geoffroy Gagnon (fifth), Mark Hendrickson (10th) and Evan McEachran (11th) all made the final, in which Switzerland's Andri Ragettli held off Americans Colby Stevenson and Deven Fagan for the top of the podium. Other Canadian competitors were Noah Porter MacLennan in 18th and Whistler's Teal Harle in 24th.

As for the women, Megan Oldham and Olivia Asselin finished eighth and 10th, respectively. Switzerland's Sarah Hoefflin held off Great Britain's Isabel Atkin and American Maggie Voisin for the victory.

Speaking from Breckenridge, Colo. where she's preparing for this week's Dew Tour, Sharpe reported that it was dumping snow, with plenty of precipitation forecasted leading into the competition.

"We definitely like it when it's bluebird, we can have a really good time, and be sweating instead of freezing," she said.

After Dew Tour, the final contest of the season for Sharpe will be the Calgary World Cup later this month.