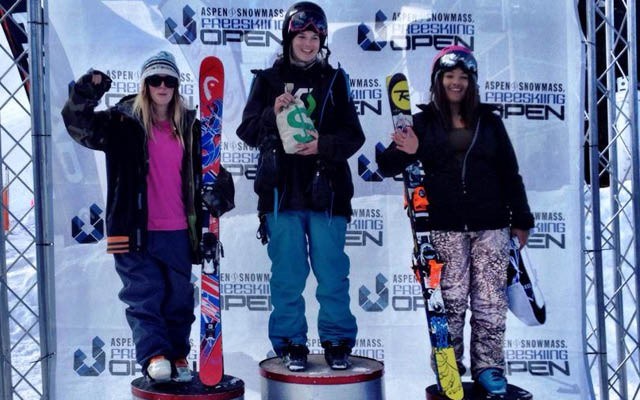 Not long after halfpipe skiing first appeared in the Olympics, Whistler's Cassie Sharpe earned a gold medal of her own in the pipe, taking top spot at the Aspen/Snowmass Freeskiing Open.

"I'm pretty happy about it," Sharpe said Tuesday, Feb. 25 from her native Comox. "My skiing's finally coming back since my injury last year... I've definitely been working hard to be where I'm at now."

Sharpe has been skiing well since the calendar flipped to 2014, earning top-20 finishes at World Cup events in Calgary and Colorado in January, then winning the bronze-level Canadian Open Tour event in Moonstone, Ont., a few weeks later. The 21-year-old beat out U.S. skiers Jamie Crane-Mauzy (79.00) and Zyre Austin (76.60) in Aspen for one of the biggest wins of her career, plus the $1,500 top prize.

The 2018 Olympics are a long-term goal for Sharpe, and by winning the first major contest since the sport's Games debut, she's put herself on a good path toward Pyeongchang.

"It's definitely a good one to put under my belt," she said. "I've been doing a lot of airbagging and practicing to get some of the bigger tricks. A left corked 9 is what my next step's going to be, and I've got my back-to-back flairs back. I'm definitely working hard on catching up to those girls (who competed in Sochi)."

Wilson was less than a half-point short of the podium on Sunday, finishing with a score of 76.20.

Whistler-based skiers on the men's B.C. Pipe and Park Team also headed to Aspen for the weekend of competition. Brenden Reid made it through to the men's slopestyle final held Friday, Feb. 21 and earned a score of 73.83, good enough for eighth place out of a field that started with more than 100 skiers.

Taylor Wilson finished 11th in his superpipe semifinal heat on Saturday, Feb. 22, but wasn't among the 12 skiers in total who advanced to the final.

The Sigge's P'ayakentsut loppet returned to Whistler Olympic Park on Saturday, Feb. 22 with hundreds of cross-country skiers of all ages testing their endurance in several different distances.

Phil Villeneuve outlasted the field for a victory in the men's 50-km race, finishing the course in two hours, 39 minutes, 40.2 seconds to take the title. He beat runner-up Leighton Poidevin to the line by 18 seconds. Glenn Bond was another 10 minutes back to wind up in third place.

Michele Wolfe posted a time of 3:08:56.8 to win the women's distance, a mark that put her among the top 10 skiers who finished the 50-km course overall. Christine Fletcher came through the finish about nine minutes behind, and Frances Vice skied her way into the bronze-medal position.

The men's 30-km race had the biggest turnout, and Callaghan Valley Training Centre athlete Martin Schrama earned the victory with a time of 1:30:34.5. The race ended up being close between those on the podium, as second-place finisher Dudley Coulter was just 13 seconds back and Spencer Lacy was only 18 seconds behind in third.

Local athletes were on top in the youth women's 15-km distances, with Sea to Sky skiers sweeping the 13 to 15 age group. Mila Wittenberg earned the victory, while Julia Long and Kaede Kawano were separated by just two-tenths of a second while finishing second and third, respectively. Alisa Feuz was fourth, just one second outside the top three.

Meanwhile, Whistler's Lauren Doak earned a comfortable win in the 16 to 17 age group, more than 16 minutes ahead of Katie Weaver and Eliza-Jane Kitchen.

Any young athletes inspired after watching ski jumpers in Sochi during the Winter Games are in luck, because Whistler Olympic Park will be hosting introductory ski jumping camps over the next two weekends.

The "Flight 2022" single-day camps are for boys and girls aged eight and older, the first ones taking place Saturday and Sunday, March 1 and 2. The participants learn the basics of ski jumping, starting safely on small jumps and bumps. The cost is $30, which includes all rental equipment and trail fees. The camps run again on March 8 and 9.

A spring break camp for children aged eight to 13 is also scheduled for March 17 to 21 at Whistler Olympic Park. Campers gather daily at the facility from 9:30 a.m. to 3:30 p.m. and will explore all of the different sports and activities the 2010 legacy venue has to offer.

The resort's most experienced racers got their turn on the Blackcomb Terrain Park's snowcross track when the Kokanee Valley Race Series continued last week.

Though the terrain park and track are usually filled with a younger crowd, it was age groups for racers in their 60s and 70s that were busiest in the Feb. 20 race.

Racers took two runs and counted the fastest for their official time. David Trussler was quickest in the men's 70 to 79 division, posting a time of 57.48 seconds on his final run to edge Lloyd Henderson. Butch White (56.05) won the men's 60 to 69 group by just three-tenths over Paul Psutka.

The series resumes Thursday, Feb. 27 with a super-G to be held in the Dave Murray National Training Centre. Visit www.whistlerblackcomb.com/events for full details and results.