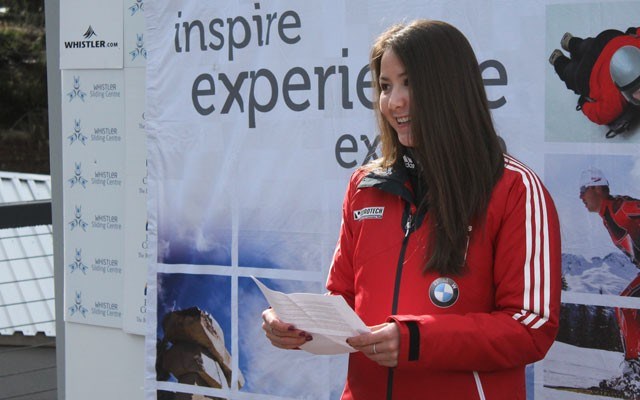 Jane Channell made headlines across the world this year, but not for the reasons she'd have liked.

The 26-year-old North Vancouver skeleton racer had some fine performances this season, capped with a fourth-place showing at the FIBT World Championships in Winterberg, Germany, earlier this month.

But it was an odd incident at the European Championship in Igls, Austria, in February that brought her the most attention. Early in her first run on Feb. 7, Channell struck a broom that had inadvertently been left on the track as crew dealt with snowy weather. The encounter stretched beyond the sliding scene, making websites like Deadspin that generally focus on North American professional sports news. One video on YouTube, meanwhile, had racked up over 117,000 views as of press time.

Even in the lead-up, things seemed off, as Channell explained each racer is allotted 30 seconds to start after a track is declared clear. However, she said she saw someone was still on the track 17 seconds into her countdown.

"I look around and they're still telling me to go, so I go, I run, I load on my sled and the track is clear," she said. "I get pushed to the left, but (in) the corner, I want to go back to the right. I'm leaning to the right anyway, and this broom all of a sudden appears.

"I'm lucky I was looking in the direction I was because it clipped my helmet and then swiped my neck to shoulder and came down on the rest of my body."

Being early in her run, Channell was travelling about 60 km/hr in a sport where top speeds can more than double that. She had a sore neck and shoulder, complete with a souvenir goose egg, but after some treatment, was otherwise unharmed.

"It's the first time I believe it's ever happened so you've got to hope it will never happen again," she said.

She laughed: "Hopefully, I've got that one situation out of the way!"

To even be in that strange situation was unlikely just weeks beforehand as Channell, to her disappointment, started the season on the second-tier Intercontinental Cup after struggling in the selection races early in the season. However, she was promoted at the season's midpoint, switched out for national champion Madison Charney. Three top-10 finishes in as many tries, including a silver medal in Winterberg in December, solidified her case quantifiably as she also embedded coaches' advice into her runs to approach tracks effectively.

"I was really hoping to make the World Cup team this year, but the selection races didn't play in my favour," she said. "I was able to show my coaches what I had in the Intercontinental races and work my way up to the World Cup team for the second half of the season."

Channell debuted with an 11th-place finish in Altenberg and later posted a pair of seventh-place showings before the season pinnacle of fourth in Winterberg.

"You see all these big names and you're racing these big names. To even be able to compare yourself in a race situation with them and even beat them is just such a confidence boost," she said. "It pushes me to want to become the best."

Calgary-based Channell was in town for a post-season training camp last week and stuck around for a press conference lauding Bobsleigh Canada Skeleton's pitch to host the 2019 FIBT World Championships at Whistler Sliding Centre. While the former Whistler resident acknowledged her home track isn't necessarily one that plays to her strengths, she feels it's one she can tame should she be seeking to wrangle all the marbles here four years from now.

"I'm a pusher. My start is one of the strongest parts of the race right now," she said. "Hopefully, with more time and more runs down this track and all the other tracks, my driving skills will be at the same level as my start."

Channell, who took up the sport in 2011, said she's only recently started to realize the true impact she can have being the first World Cup skeleton racer to have cut her teeth in Whistler.

"It leaves me speechless. It makes me proud to be from Vancouver and proud to call Whistler my home track," she said.