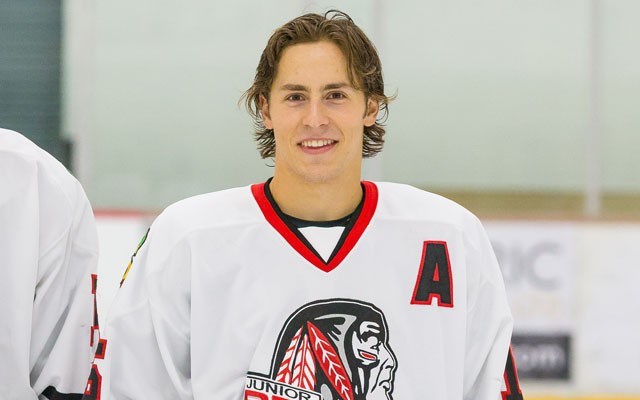 STARRING IN SAANICH Whistler's Evan Horvath has settled back in with the Saanich Braves, tallying six points in his last four games. Photo by Christian J. Stewart

Evan Horvath felt he had done plenty to be considered for a winter in Saskatchewan.

On a tryout with the Saskatchewan Junior Hockey League's Weyburn Red Wings, Horvath tallied a goal and an assist in two preseason games before being released.

When asked if he thought he'd made an impression, Horvath said: "I thought I stood in fairly well, but at the same time, they had all been playing together in the past, so maybe not as well as I could have. At the same time, I got two points."

Closer to home, the 18-year-old also had a tryout with the BCHL's Trail Smoke Eaters, but was told he wasn't in their future plans.

"Right now, I'm just trying to broaden my base and get this season underway, and then I'll be looking around for some other teams, but we'll see," he said.

Horvath returned to Vancouver Island to continue his role as an alternate captain with the Vancouver Island Junior Hockey League's Saanich Braves. But in sliding down a tier, Horvath wasn't able to slip right back in and dominate, scoring just two assists in his first seven games.

Horvath broke out in a 6-4 loss to Nanaimo on Oct. 22, though, scoring twice and adding an assist. He's now scored six points in his past four games and is returning to being the player he knows he can be.

"I'm definitely getting my rhythm back," he said. "I've been building confidence lately. It's tough coming back from Jr. 'A' and trying to take up such a big role, but it's coming back easier now."

One area where Horvath has improved throughout the year is cutting his penalty minutes, having sat in the sin bin just eight minutes this year after averaging roughly a minor a game the past two seasons.

The Braves started the season with a 5-2-1 record but suffered a blue October, going winless (0-7-1) in their first eight games of the month. Saanich has since rebounded, winning twice last weekend to start righting the ship.

"We've had some ups and downs but I'm pretty confident that we're going to be doing better and better every week," he said. "Really, there's nowhere else but up.

"Everyone's bonding a lot better and the way we are off the ice getting better and that's getting to be displayed on the ice."

Though the Braves sit in third place in the South Division, Horvath said if things go according to plan, Saanich would be a tough out when post-season play rolls around.