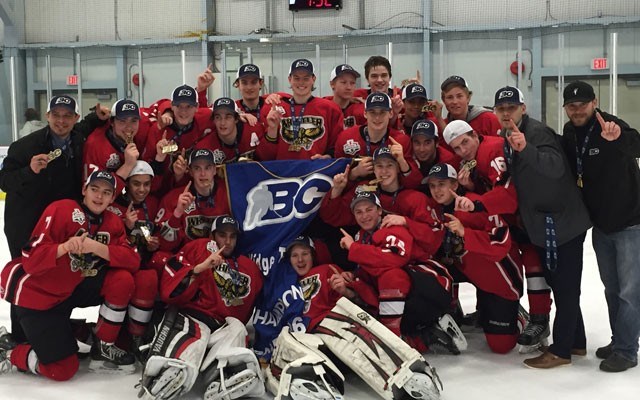 Finn Withey was out on the ice in a situation every young hockey player dreams of.

Glory on the line.

Withey did exactly what he had to do, taking a tap pass from Cody Flann and scoring the winning goal to lift the Whistler Winterhawks to the midget tier 3 provincial title on March 17. The tally silenced the hometown Sunshine Coast crowd that was cheering on its Blues in the gold-medal contest.

"I had just jumped on the ice with about 40 seconds left," he said. "I picked up the puck (at centre ice) and went down the wing and shot it. Far side. Top shelf.

"The goalie was deep in his crease. I saw an opportunity to shoot it."

Head coach Mike Borrelli recalled Withey's shot being impressive — and it needed to be — to secure the victory.

"He shelved it. That thing popped in and out in a very small space," Borrelli said.

Though the Winterhawks had taken four of five meetings against Sunshine Coast heading in, the crowd was more raucous than usual with provincial bragging rights on the line, Withey said.

"There was a lot of pressure because there were a lot of fans for the other team because it was in their home rink," he said. "It was a really important game for them."

"As expected, it was just a nailbiter. It was a real give-and-take. The boys just battled through three tough periods. Sunshine Coast by far played probably their best game of the year against us all season long," Borrelli said.

The tournament got off to a dubious start for the Winterhawks, who lost 9-6 to Coquitlam in their opener in what was ultimately the only win for their opponent. In a position where any loss would knock them out, Whistler then overcame a deficit and tied Alberni Valley 3-3, doubled Whitehorse 6-3 and trounced Trail 11-0 to earn a spot in the semis. The squad then upset undefeated Smithers 4-2 to earn the right to face Sunshine Coast.

"We were pretty confident we'd be able to beat them because they probably thought they'd be better than us because we lost to some weaker teams earlier in the competition," Withey said.

Borrelli said the Winterhawks, a combined team made up of players from Whistler and Squamish, presented a thoroughly challenging lineup to opponents as they lost just five contests all season and took home the league regular season and playoff banners in the process.

"We didn't have a whole lot of drop-off. There wasn't a huge gap between our top-end talent and our bottom talent. Everyone was solid," he said.

The other Whistler squad that advanced to see provincial action, the bantam tier 4 club, ended in third with a 4-2 record at the East Kootenay-Golden-hosted event.

Whistler lost 6-3 to Kamloops to open but then went on a roll, defeating Taylor 3-1, Langley 4-1, Golden 7-1 and Windermere Valley 7-6. The Winterhawks were then edged 3-2 by the eventual champions from North Okanagan to wrap the round-robin. Though the Winterhawks tied for second with Kamloops, the latter held the tiebreaker based on their previous matchup.