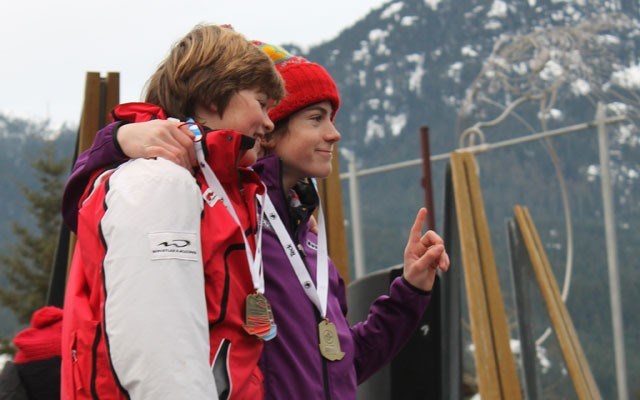 It took a little bit longer than expected, but Whistler Mountain Ski Club finally welcomed the top young skiers along the coast to the Dave Murray National Training Centre.

The U14 stop on the Teck Coast Technicals circuit was originally slated for last month, but low snow conditions forced organizers to postpone the race to Jan. 10 and 11.

WMSC board chair Monique Morden said they had to make the call about two weeks before the race, which was originally scheduled for Dec. 20 and 21.

"This race was supposed to be before Christmas, but we had to reschedule it. This was definitely the right call," she said. "It's not a last-minute thing. The race chair decided the best thing was for us to hold off and wait, and the mountain's trying to get things going and fulfill what they need to do for their customers. It was a good idea to hold off."

With everything from visibility to snow conditions turning out ideally for the race, Morden was pleased with how the weekend played out.

Morden explained that changing the Whistler race set off a bit of a domino effect with the rest of the loop, but it looks like it'll all work out positively.

"This is where the Coast Zone works together. There was a Mount Washington race that was originally supposed to run next weekend, so we've now bumped that to February," she said. "It does take collaboration between all of the clubs to figure it out.

"I think it's going to help Mount Washington out, they're still a little bit thin."

In the end, about 110 skiers from clubs at Mount Washington, Grouse Mountain, Mount Seymour, Cypress Mountain and here in Whistler participated — and a volunteer force so large Morden didn't know its size off-hand helped keep everything running smoothly.

"It's always a challenge because you have new parents coming in, so (we're) trying to get them into the fold and communicate everything," she said. "We have a great group of new parents coming on, and we're always trying to have succession — whether it's timing, announcing or starting, there's lots of different roles."

On the course, WMSC dominated, as Maja Woolley won both one-run slalom races Saturday and the two-run event on Sunday. Nathan Romanin did the exact same thing on the men's side.

Woolley said Sunday's conditions lined up better with her areas of strengths, but she's able to "just go" and make the most of whatever a mountain throws at her.

"Today it was icy and I'm pretty good at skiing on ice," Woolley said.

Gigi Kranjc took silver in all three events, while Arabella Ng took two bronzes and Rosie Smith took the other. All are WMSC athletes.

Romanin, meanwhile, said he felt "great" and had a good time competing in the slalom, his preferred event.

"It's the adrenaline, it's hitting the gates (that's appealing)," he said, noting his overall fitness works well with the slalom event.

WMSC men's medals were spread out. Eric Smith won a silver and a bronze, Kieran Harley took a silver, and Skyler Beauregard and Tait Jordan both won a bronze. Grouse Mountain's Blair Nellis broke up the sweep with one silver.