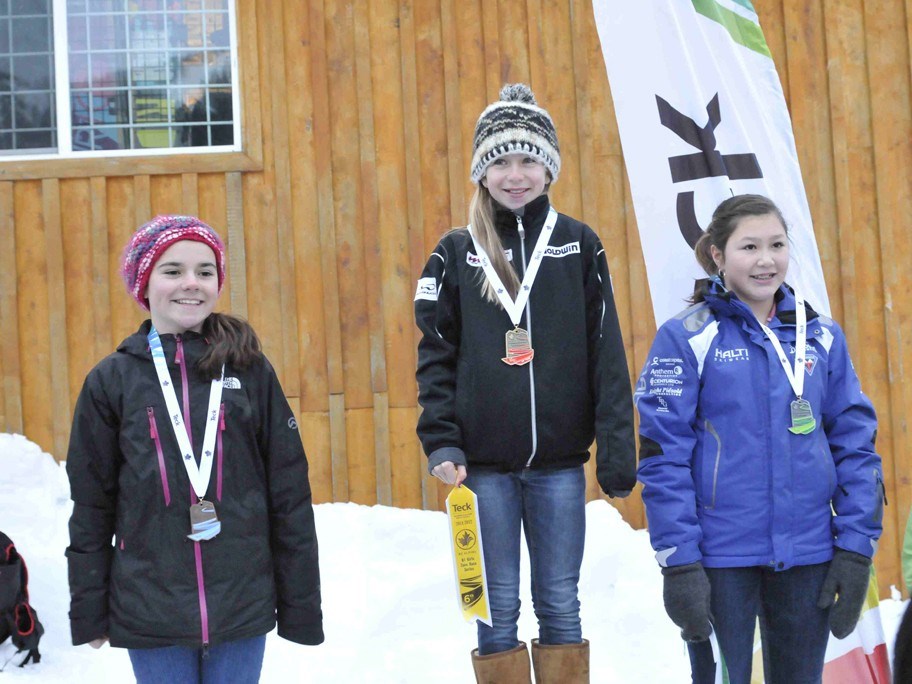 The J1 level skiers (aged 15 and 16) with the Whistler Mountain Ski Club took part in the Miele Cup last weekend at Nakiska, Alberta.

In the women's slalom, Rae Swette was the top J1 racer and second overall with a two-run time 1:35.68. Also in the top 15 were Charley Field in eighth, Emma King in 10th, Jocelyn Ramsden in 11th and Celeste Pomerantz in 12th.

In the men's race, Whistler's Blake Ramsden was 10th overall and fourth among J1 racers.

The racing was to continue on Monday with a giant slalom, but the event was called due to the extreme cold — minus 30 before wind chill.

The Whistler Mountain Ski Club K1 team (ages 11 and 12) took the ferry to Mt. Washington this past weekend for the Teck Mountain Washington Coast Zone Race, and then cruised back on Sunday with a pile of medals.

At Mt. Washington, Kasper Woolley and Katie Fleckenstein led the team with four gold medals each over in five races.

"I feel really good about my skiing right now," said Woolley. "I have been working hard to change my technique and it's finally working."

In the opening one-run GS, it was a WMSC sweep for the boys team with Woolley in first, Finn Iles in second and Kyle Alexander in third. Also in the top 15 were Davis Bonsall-Jevning in fifth, Griffin Smith in seventh, Matthew MacDonald in ninth, Nikola Filipovic in 11th, Alexander Valentin in 12th and Myles Kowalczyk in 14th.

In the opening girls' GS the top spot went to Mollie Jepsen of the WMSC, followed by Nicole Mah of Grouse and Lucy Turner of the WMSC. In the top 15 were Katie Fleckenstein in fourth, Micah Morris in sixth, Erin Finan in eighth, Anna Gosney in ninth, Hannah Morris in 10th and Alissa Wong in 14th.

In the second race Katie Fleckenstein moved up to first, followed by Grouse skiers Kristina Natalenko and Frances MacDonald.

Day two saw a two-run GS for boys and girls.

Katie Fleckenstein won the girls race, followed by Kristina Natalenko of Grouse and WMSC racer Lucy Turner. In the top 15 were Mollie Jepsen in sixth, Anna Gosney in eighth, Hannah Morris in ninth, Martina Gershon in 10th, Sophia Quinn in 11th, Sierra King in 13th and Alissa Wong in 15th.

Sunday was slalom day with two on-run events. Kasper Woolley took gold for the WMSC in both events, while Finn Iles won two silver medals and Asher Jordan two bronze medals. In the first event there were six other WMSC racers in the top 15 — Davis Bosnall-Jevning in fifth, Myles Kowalczyk in sixth, Griffin Smith in seventh, Dawson Yates in 10th, Nikola Filipovic in 12th and Kai Labrenz in 15th. In the second race the top 15 included Davis Bonsall-Jevning in fourth, Myles Kowalczyk in sixth, Matthew MacDonald in ninth, Kai Labrenz in 11th and Dawson Yates in 12th.

Katie Fleckenstein won both of the girls' slalom races, one of them by close to two seconds. In the first race she was joined on the podium by Nicole Mah of Grouse and Ella Renzoni of Cypress. Whistler skiers in the top 15 were Micah Morris in fourth, Mollie Jepsen in seventh, Martina Gershon in ninth, Hannah Morris in 10th, Lucy Turner in 11th, Sophia Quinn in 12th, Alissa Wong in 13th and Anna Gosney in 14th.