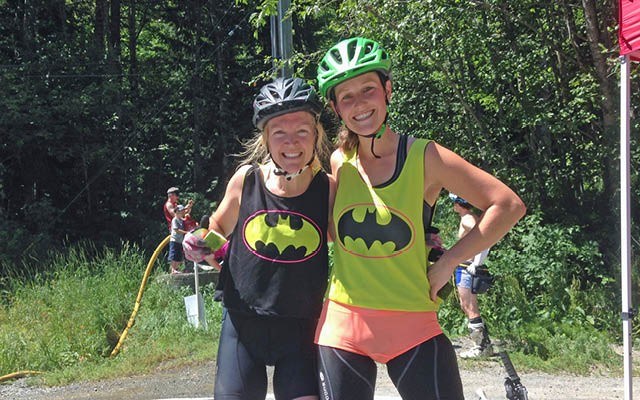 batgirls Leah Trudeau, left, and Samantha Shook show off their Batman-inspired costumes during a break in Wonder Woman on Saturday, July 12. Trudeau and Shook both finished in the top three overall of the annual women's-only race hosted by WORCA. Photo BY Braden Dupuis

As temperatures climbed past 30 degrees Saturday afternoon, riders in WORCA's fourth annual women-only ride were grateful for the various cool-down stations along the way.

"It's a tough race with the heat. Painful, but lots of fun," said Whistlerite Leah Trudeau at one of the cool-down stations.

"It's a great atmosphere. Everyone's cheering, dressed up. It's sweet."

This year's theme was "Wonder Woman," with riders encouraged to don their best capes and spandex as they traversed five separate timed stages spread throughout Whistler.

Trudeau and her friend Samantha Shook wore tank tops emblazoned with the Batman logo as they made their way through the stages.

"It's so fun riding with girls because everyone's cheering at the top for each other, and you can't find a race like this (anywhere else)," Shook said.

Proceeds from the event — estimated by organizers to be about $3,000 — go to support the Howe Sound Women's Centre in Squamish.

"It's a great cause, and it's neat to see everyone that comes out," Shook said.

"In another life I'd be a costume designer," joked Dorothy Luebke, who designed the outfits.

"Somehow being in costume takes a lot of inhibitions away for some people when they're riding. You can't be serious when you're wearing a tiara."

The themes and costumes of the annual women's race lead to a more laid-back atmosphere, said Luebke, who has raced in the event every year.

"I think this helps take that stress and pressure off of people when you can come out and just have fun. The chatter is amazing," she said with a laugh.

"You go to a regular bike race and all the guys are serious, like, you can tell they're all in deep thought. Here, it's all about social."

Another of the Wonder Women, Veronica Kacinik, said that the event offers the best of both worlds for riders.

"There are definitely the competitive people, but we're really more just about having fun and having a good time," she said.

"We want to show that people of all skills and levels can still do these events. I think that's the key thing."

While the event was timed and the finishers ranked, the course design was geared towards veterans and less-seasoned riders alike.

"We have this huge talent pool here, and a bunch of them like to race but some don't," said race director Clark Lewis.

"So we kinda try to cater to both."

Part of the appeal of the event is that riders can travel together between stages, moving at their own pace, before taking on the stages one at a time.

"It's a really fun way to move around a course."

The course design followed something of an "old school theme," Lewis said, utilizing some of Whistler's older trails that don't often get raced.

After registering at Myrtle Philip Community School, racers made their way to the first stage at Blueberry Trail, followed by Stage 2 along Mel's Dilemma.

"I try and mix it up a bit to give the pedal-fit people a chance to do really well in some stages and the downhill-oriented girls to do well in other ones," Lewis said.

"So (Blueberry Trail) is kind of an up and down, (Mel's Dilemma) is just a climb."

Samantha Shook finished with the best time on Stage 1 at four minutes, 29 seconds, while Brandi Heisterman and Trudeau tied for the Stage 2 victory, each with a time of 2:07.

Stage 3 featured the winding downhill slope of Cat Scratch Fever — won by Rebecca McQueen with a time of 2:45 — followed by the challenging, up-and-down technical ride of Billy's Epic, bested by Brandi Heisterman with a time of 41:13.

The fifth and final stage — Cut Yer Bars — brought racers full circle to the registration point at Myrtle Philip, and was won by Sarah Olner with a time of 8:20.

Each rider earned a point total that matched their finish placing on each stage, with 0.75 points assigned to stage winners. Participants got to drop their worst score, and add the four remaining results together to notch an overall point total.