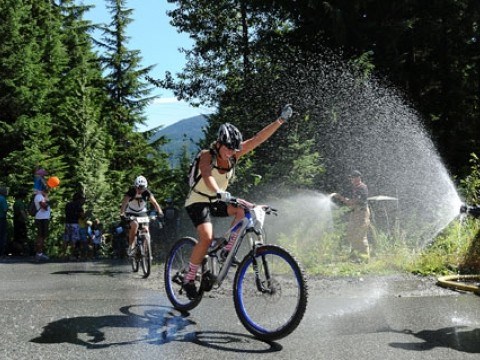 About a decade ago, the Whistler Off-Road Cycling Association (WORCA) had a bit of an image problem. People in town associated the mountain bike club with their weekly Toonie Rides, rather than the organizations' other activities like advocating for trail access, trail maintenance and developing the sport.

WORCA has worked hard to change that, and looking at the numbers at this years' annual general meeting on Sept. 29, it appears that they've succeeded.

"The struggle 10 years ago was to get people to sign up for reasons other than Loonies, and this is the year that it looks like we've finally done it," said race director Tony Horn, pointing to the number of riders that signed up for events like Betty vs. Veronica, the Phat/PhaSt Wednesday Downhill Series, Monday Night Rides and programs like the youth dirt camps.

Rocky start to the season

No question that it was a strange year for the club, at least until the bike season finally got underway.

The snowfall in the valley delayed the start of the Toonie Ride season for a week and trail maintenance season even longer, and the group came into the season under the shadow of a lawsuit - and the revelation that their insurance broker in 2009, the season the accident occurred, neglected to actually file their $30,000 liability insurance policy. With no insurance backing the club the suit was dropped at the start of May, but it was a stressful spring and winter for board members who didn't know what the outcome would be.

Director of youth Craig MacKenzie, who took on the insurance issue, stressed that WORCA had no warning that they were not insured - for every race they requested and received insurance certificates for their sponsors and they filed all the appropriate paperwork.

The board was able to continue as always with a better - and cheaper - insurance policy going forward, although with a few changes. There's far more paperwork required, and rates are based on a user-based model rather than the number of members. WORCA now counts participants in every event - trail maintenance days, camps and clinics, Toonie Rides, Monday Night Rides, etc. - to come up with a total number of users. The total insurance bill for that number of users is now $17,000 for liability, almost half of what it was.

"Our previous broker took us for a ride," said MacKenzie.

If the number of users increases then the club's insurance will increase as well.

The other big change is that WORCA will have to pay for its insurance up front, which requires the club to keep a surplus of funds in the bank at the end of every season.

This year, between the insurance surplus and unspent trail maintenance money, WORCA will finish the year with about $25,000 in the bank.

While the late start to the season stalled WORCA's trail plans for 2011, the season also ended abruptly when their trail contractor was called away to start his winter job a few months early. They've worked with another contractor to fill in the gaps, but the result is that WORCA spent only about half of their $30,000 trail budget.

One of WORCA's main focuses this year was Comfortably Numb.

"It hadn't seen any maintenance in two years and it was really getting rough in sections," said trails director Jerome David. "It's one of those IMBA (International Mountain Bicycling Association) trails that every visitor rides, and it needed some work - cutting out roots and stumps, using rocks to armour the trails. It's an ongoing project."

There was also work on Runaway Train, including a new exit to replace the one that was getting eroded, and Kill Me Thrill Me, where several bridges had to be replaced.

"It's the trail that people do every day, and it will need more work next year because some of the bridges are in rough shape," said David.

Billy's Epic is also getting a makeover, with armouring in areas that are becoming eroded. The exit to Industrial disease was also in bad shape and needed some work.

David said the issues are the result of high rider numbers - especially the bridges in Kill Me Thrill Me that were only built a few years ago but are already worn.

"Whistler is a mecca for riding, and visitors and events come here for the biking - and the bike technology has been changing and the impact of downhill-style riding has gone up," said David. Trails will have to be built and maintained to accommodate the numbers, the bikes and this more aggressive style of riding in the future, he said.

David also announced that Shit Happens has been reconnected with a new trail, after the Baxter Creek development cut through the previous connector. There is still some work to do, but it can be ridden at this point.

As well, he showed off the new WORCA trail maps, which were made available at local bicycle stores and in information booths in recent weeks for $10. Each map purchased will funnel $3 back into trails. WORCA has also ordered new signs to make it easier for people to find trails.

In the future, David said one project that is required is changing trails along Alta Lake Road to make the exits safer, given the number of cyclists and cars using the road.

WORCA's original mandate from its founding in 1989 was to reopen Garibaldi Park - and specifically the Singing Pass trail - to mountain bikes. And while the mandate has expanded over the years, the directors reaffirmed that this remains a core goal of the club. Given the fact that WORCA has over 20 years of trail maintenance experience, and the fact that BC Parks has been unable to maintain its trail network, David said now might be a good time to talk to the province.

A seat at the FWAC

This year WORCA had a seat at the Forest and Wildlands Advisory Committee, which among other things provides input on the Cheakamus Community Forest operations.

Paul Rawlinson, who joined the board last year as Director at Large, assumed the Director of Planning role mid-season when the previous board member left town. He has been meeting with the committee to represent WORCA, ensuring that any trails impacted by forestry are either repaired or replaced. So far stakeholders have agreed with WORCA's "no net loss" policy, which means that any trail that is lost to development of any kind has to be replaced to ensure that the total amount of trails is never diminished.

"So far it's working, as we've seen with the Train Wreck extension and the stuff around Green Lake this year," said Rawlinson.

Every year WORCA hosts a bike swap to raise money for youth programs, and the 2011 event raised over $12,000 on roughly $12,000 in total sales. As well, a portion of WORCA's $25,000 Community Enrichment Grant from the municipality went towards the youth.

Some of the initiatives this year included a new camp for five-year-old riders, four youth Toonie Rides, and a whole summer of youth dirt camps for kids aged 6 to 12. The club also purchased 25 jerseys for the high school mountain bike team.

As for teaching adults to ride there were two adult clinics this year, and WORCA is looking at the possibility of hosting adult camps next year.

WORCA President John Blok stepped down after two years on the board, saying it was a tough and stressful year with the lawsuit, but that he felt confident the association was in good shape. "A lot of clubs in North America and elsewhere would be envious of the membership we have, the lack of politics. And when a goal goes in one direction, we make it work," said Blok.

He was replaced by James Brooks, who has served as WORCA's treasurer since 2006. The new treasurer is Katie Painchaud.

Louise MacDougall took over for Vanessa Murphy as Director of Public Relations.

Tony Horn said he would return for one more year as Director of Race.

The old board and new board will plan next year's activities at their annual retreat in late October. The first event hosted by the new board is the annual Halloween Toonie Ride, which will take place on Oct. 27 in the Riverside area.