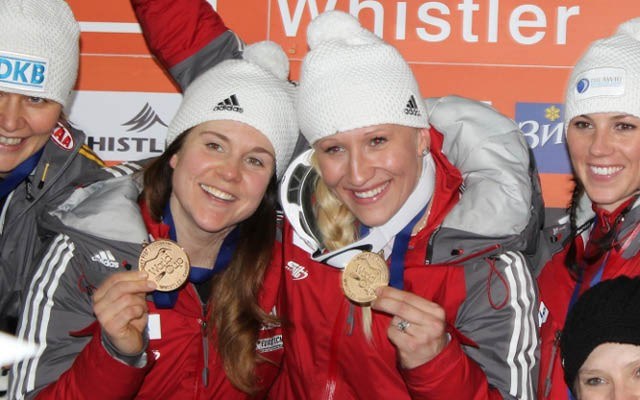 Kaillie Humphries's incredible streak of women's bobsleigh podium finishes was snapped at Park City, Utah, over the weekend, but not until she and brakeman Heather Moyse added one more top-three finish to the total.

Humphries earned her 15th consecutive podium by finishing second with Moyse in the World Cup race held Friday, Dec. 6 at the 2002 Olympic track, the first of two races in a back-to-back event. However, her run ended there when she and Chelsea Valois placed seventh the following day with Moyse out to injury.

During the run of podium results, which stretches back to the 2011-12 season, Humphries drove the Canada 1 sled to 11 wins, including two world championship titles, with several different partners on the back of her bob.

"Nobody has ever dominated the sport this way and likely won't for years to come because I believe Kaillie will continue to dominate," said Canadian head coach Tom De La Hunty in a release. "Nobody has done anything like it — to podium like this every week. It is a very special accomplishment by a very special and gifted athlete."

Humphries and Moyse were 0.13 seconds back of the winning U.S. duo, Elana Meyers and Aja Evans, when picking up the silver on Friday.

Driving the Canada 2 sled, Jenny Ciochetti was 15th with Valois on Friday and 14th with Emily Baadsvik on Saturday.

Spring and his crew had the best four-man Canadian finish on Saturday, placing seventh. Kripps drove his team to ninth place and Rush wound up 11th.

Sarah Reid slid to her first podium finish of the World Cup season during women's skeleton competition Friday at Park City by finishing third. The 26-year-old qualified for a spot at the Olympics by finishing sixth in Calgary the week before.

"(After getting) that last Olympic qualifier last week I feel like I was able to relax and really focus on a solid race," said Reid.

Robynne Thompson, who finished 10th, and Cassie Hawrysh, in 11th spot, rounded out the Canadian results.

Meanwhile, past Olympic medallists Jon Montgomery and Mellisa Hollingsworth struggled in Intercontinental Cup competition at Igls, Austria, which hosted a pair of races on the lower circuit this weekend.

Montgomery posted 10th- and 13th-place finishes in the men's races, while Hollingsworth finished sixth and ninth in her races. Only Intercontinental Cup victories count as Olympic qualifying results.

Lake Placid hosts the next FIBT World Cup races from Dec. 13 to 15, including two women's skeleton races. It is expected that Hollingsworth will take Hawrysh's spot on the World Cup team for the back-to-back at the New York track.

Olympic champ Maëlle Ricker suffered a mild concussion in training for the snowboard cross World Cup opener at Montafon, Austria and did not compete. With the Sea to Sky rider already qualified to the Sochi Games, national team brass decided it would be best to hold her out of competition.

Quebec's Dominique Maltais finished second in the women's race held Saturday, while Whistler's Carle Brenneman was 18th for the next-best Canadian result. Kevin Hill picked up a bronze for Canada in men's racing.

Lake Louise hosts the next World Cup stop Dec. 20 and 21.

Quebec's Alex Harvey earned a 16th-place finish in the men's 15-kilometre classic to highlight results from the World Cup cross-country races held at Lillehammer, Norway, over the weekend. Ivan Babikov of Canmore, Alta., had the next-best Canadian finish by placing 35th.

Both were part of the following day's 4 x 7.5-km relay, in which Canada placed 14th.