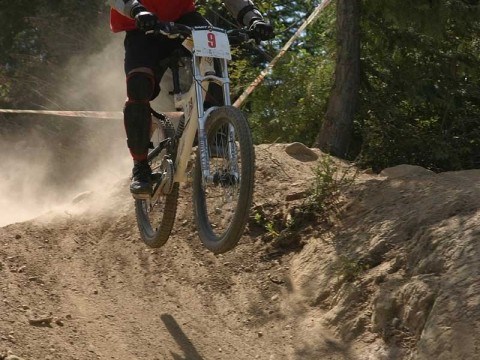 They're coming from near and far, from the Gold Coast in Australia and Barcelona in Spain, from Vallnord, Andorra to Somerset West in South Africa. They're from England, France and New Zealand and from all over the States. And some are born and bred in Canada.

They are as young as 17-year-old Brandon Semenuk from Whistler. And some are twice that age.

They are the men and women of Crankworx 2009 and they're here this week as Whistler turns into all things mountain biking in its annual summer festival.

Get ready for another year of mind-numbing jumps, stomach-churning stunts, record-breaking runs and everything else you can think of in between. And for those less inclined to get on their bikes, there's the Deraylor Music Festival, the Crankworx block party and the deep summer photo challenge.

For complete coverage of the festival go to www.crankworx.com.

A rider's favourite, the Dual Slalom is a head-to-head high speed race down the mountain over bumps, jumps, around banks and with the promise of a few surprises to keep bikers on their toes.

The competition is spectator friendly as the riders make their way down the mountain through a set of parallel gates to the finish. Each pair of riders goes twice, once in each lane. The one with the lowest combined time moves on to the next round. The amateur finals take place from 3:30 to 6 p.m. and the pro finals from 6 to 8 p.m. An award ceremony at the main stage at the base of Whistler Mountain will follow.

There is $6,500 in prize money to give away so expect riders to be pushing their limits as they race for the prize... and the glory.

The Garbanzo downhill is one run, but it's a long one, starting at the very top of the Whistler Mountain Bike Park and continuing down, down and down. The big question this year is: can someone break the 14-minunte mark? Seems like a tough one to beat considering there's 3,400 vertical feet between start and finish.

The pro race takes place from 3:30 to 6 p.m. See the winners crowned at the main stage afterwards.

As the downhillers battle it out in the bike park, cross country riders can take part in the Ken Quon "Ride On." There are three different riding events all at the same time: a "traditional" family ride on the Lost Lake trails, a 'Loonie' type ride and the Re/Max Corridor Cup Challenge which is a two-member team event.

Registration begins at 9:30 at the Riverside RV Resort and Campground and the rides are followed with a barbecue to raise money for emergency services. For more information go to www.kenquonrideon.com

Back for the third year in a row, WomenzWorx is a chance for the ladies to learn and compete and generally embrace mountain biking and all it has to offer. This first day is all about the training, with day two on Tuesday, Aug. 11 featuring the competitions: a technical descent, a jumps and tricks line and The Gala - an invitational best trick event in the Boneyard.

It's one run. Perhaps the bike park's most iconic run - A-Line. Two hundred of the world's best riders will be flying down A-Line Wednesday. The trail has more than 100 jumps and last year the fastest man, Brian Lopes, raced down the trail in 04:22.10, while the fastest woman, Rebecca McQueen, wasn't far behind clocking in a 04:51.05.

The pro race runs from 3:30 to 5:30 p.m. with thousands of dollars in prize money for the taking.

The best 24 riders have been invited to the VW Trick Showdown on Aug. 13 to compete in a "best trick" rider-judged contest. There are two sessions of 45 minutes on two features - the Dirt Jump below the SRAM feature and the Final Kokanee Drop. It's a Winner-Takes-All for the best trick on each feature and there's an added bonus to boot - announcer Brad Ewen will have $1,000 cash at each feature that will go to anyone who can impress him. And don't think there won't be some impressive stunts here. There is $8,000 in prize money to give away at the trick showdown.

The course is located in the Boneyard at the base of the Whistler Mountain Bike Park. There's perfect viewing opportunity at the base of the mountain or watch the Jumbotron screen in Skier's Plaza. If you can't get out go to GO211.com for live webcast coverage of the best trick. Best Trick Session 1 begins at 5:30 p.m. Session 2 begins at 6:30 p.m.