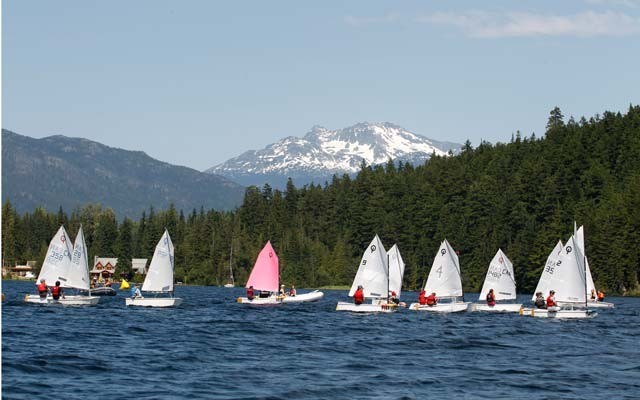 BOATS ON THE WATER The Whistler Sailing Association will host its fifth annual regatta later this month. file photo

Hopefully, there will be a sale on sails soon.

The Whistler Sailing Association's (WSA) fifth annual regatta will take to Alta Lake on Aug. 20 and 21 as the B.C. Circuit's seventh event of the season. It will be the second time Whistler will hold a BCSailing competition after years of hosting trial events.

As part of the regatta, sailors will compete in the optimist, laser, laser radial, 420 and pirates categories.

Spectators will be welcome to watch all the action from Rainbow, Lakeside and Blueberry parks, though barges, boats and other watercraft on Alta Lake must stay well away from the sailing course.

The WSA noted in a release that 10 local sailors are anticipated to compete.

For more information on the regatta or any WSA programming, visit its website at www.whistlersailing.ca.

Whistler Blackcomb (WB) is expanding its offerings for outdoor enthusiasts on the rise.

The company announced last week it will create the Blackcomb Ascent Trails, which are three interconnected routes taking hikers from the valley floor to the Rendezvous Lodge.

When completed, the trails will run over five kilometres with a total elevation gain of 1,200 metres.

"These trails have been designed to showcase the beauty and diversity of Blackcomb Mountain while offering an exhilarating uphill hike with the option to download using our lift system," Arthur De Jong, WB's Mountain Planning and Environmental Resource Manager, said in a release. "This allows guests to maximize the health benefits of a continuous uphill climb while avoiding the pounding of downhill hiking."

The project's first phase, two sections of trail connecting the valley floor to the top of the Wizard Express chairlift, opened on Aug. 6. The second phase of the project, from Wizard Express to the Rendezvous Lodge, is set to open next summer.

Access to the trails is included with day passes and season passes, while tickets for the trails only are $15, including one download. Passes are available at the guest services booth at the base of Blackcomb Mountain.

Squamish triathlete Julie Miller's win at the International Triathlon Union (ITU) World Championships in Weihei, China in 2014 has been revoked.

After completing its investigation, the ITU Arbitration Tribunal revealed its decision on Aug. 3.

The tribunal ruled Miller violated its general conduct rule at the Chinese race and suspended her from all ITU competitions and all events sanctioned by ITU-affiliated national bodies for two years retroactive to Nov. 1, 2015. The ITU also fined her US$1,000 and levied a $2,000 charge for "procedural costs."

Questions about Miller arose at the 2015 Subaru Ironman Canada race, when she lost her timing chip and was later disqualified.

Triathlon Canada, which said in a release it supports the ITU's decision, had suspended Miller for two years in a November 2015 ruling.

"Triathlon Canada takes great pride in building a winning program from the grassroots to elite levels in all distances of our wonderful sport, while respecting the rules of fair play," Triathlon Canada CEO Tim Wilson said in a release. "We have strong policies against athlete misconduct, and are in full support of the ITU's decisions with regards to this unfortunate series of events we take very seriously as they relate to Ms. Miller."