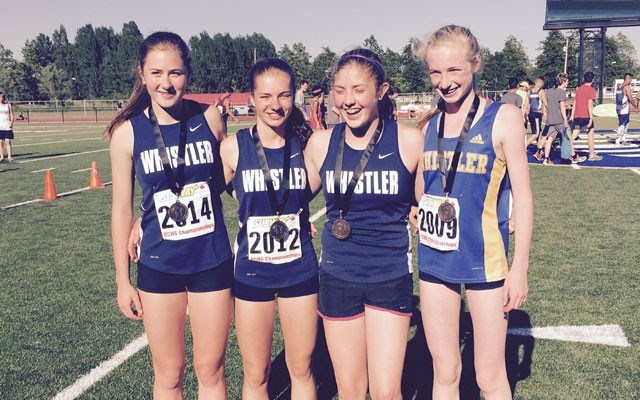 The Whistler Secondary School (WSS) Storm track and field team came away with a medal from the BC High School Track and Field Championships in Langley over the weekend.

The junior girls' 4x100m relay squad of Arnica Wight, JJ Deane, Caleigh Lamont and Jacqueline Perolli dashed to bronze at the meet, posting a time of 51.91 seconds against the winners from Semiahmoo Secondary, whose time of 51.14 got them gold.

Lamont put up a top-10 showing after placing 10th in the junior girls' javelin throw with a top throw of 28.68m. Hayley Hunter of Carihi Secondary won gold with a toss of 40.92m.

Confusion leads to DQs at Oliver Half Ironman

Ash McMillan took a wrong turn at the Oliver Half Ironman on the weekend.

But he was just following directions, he said.

Approaching the second transition of the race, McMillan said he had heard some rumblings that some runners had gone off-course, but didn't expect he'd be affected. He later found out he had gone wrong and was disqualified.

McMillan said he heard upwards of 100 to 150 runners ended up being improperly directed, including his friend Adam Ward. McMillan had finished first before realizing his result would not stand.

Some of the confusion likely arose from also having a relay as part of the race, McMillan noted.

It was one of a few "farcical" aspects of the weekend, as he noted organizers opted to allow wetsuits in the swim well after McMillan had arrived in Oliver and left his wetsuit at home.

"Quite a few things went amiss," he said.

McMillan said he'll lose the prize money he'd have earned as a result of the race, but didn't miss out on other qualifying opportunities. He hopes to recover his entry fee.

As a training exercise, he's happy with his showing.

"It was a good day of training. I got out of it what I wanted," he said. "It's a beautiful part of the world to get to and stay and to have a race there at the same time, it was a good day, despite the shenanigans.

"Hopefully next year, they'll figure out something different."

McMillan said he wasn't turned off of competing at the event in the future.

Race director Joe Dixon did not respond to email requests for comment.

Results are available at www.racedaytiming.com.

Saturday is planned to be a numb day.

The third running of the Helly Hansen Comfortably Numb Trail Running Race will kick off at 9 a.m. near Wedgemount Lake.

Runners will traverse 25 km to the Old Mill Road trailhead.

Whistler Freestylerz competitor Maya Mikkelsen has been honoured with the Spirit of Sarah Scholarship.

The 11-year-old Port Moody resident was revealed as the youngest winner of the scholarship on June 4. Mikkelsen will receive an all-inclusive training camp with Momentum Ski Camps as part of the award.

Organizers said in a release they had received applications from Europe and several different locales in North America, but were impressed with Mikkelsen and opted to keep the winner close to home.

The award was created to honour the memory of Sarah Burke, who died in 2012 after an accident during training. The panel of judges included Burke's mother Jan Phelan, husband Rory Bushfield, national team halfpipe coach Trennon Paynter and Momentum camp director John Smart. Burke was a camper at Momentum for four years and coached for another 11.

"Sarah is an inspiration to me because whenever she faced a challenge, she would push through and get it done, and I try to do the same whenever I'm scared facing a challenge," Mikkelsen wrote in her entry.

In a release, Smart explained Mikkelsen was exactly the type of winner judges sought.

"Maya has many of Sarah's characteristics — she is determined, a well-rounded park and mogul skier, who shows tremendous drive and passion for the sport. With her determination and work ethic, we strongly believe she'll be able to achieve her goals and the coaches at Momentum will be able to help inspire and motivate her," he said.

Burke's friends Haynes Gallagher and Tory Gossage have given money for two scholarships that will be awarded later this summer.

At the Ogopogo Invitational from June 5 to 7, local competitors put up 10 podium finishes in individual events.

Anna Prohaska, a 2003 birth in Level 4, was responsible for three of those with a win on the beam and third-place showings in the bars and floor events. She placed 10th overall.

Level 8 competitor Gigi Kranjc, a 2001 birth, scored the other gold for the local club, finishing first on the floor and eighth overall.

Katie Faerge, a Level 7 competitor in the 2002 division, was second on the vault en route to a 12th-place finish.

Nicole Bolleman was second in the floor event in the Level 6 2004 division and was 10th overall.

Sofia Wright, in Level 3 and the 2007 division, was third on the bars and sixth place overall.

The younger competitors are ranked on their performances and not against one another. Level 2 athletes Elly Mitchell (2008) and Nevé Maynard (2007) both earned all-around silver medals.

Whistler Gymnastics will host an outdoor competition at Spring Creek School on June 27 and 28 beginning at 10 a.m. both days.