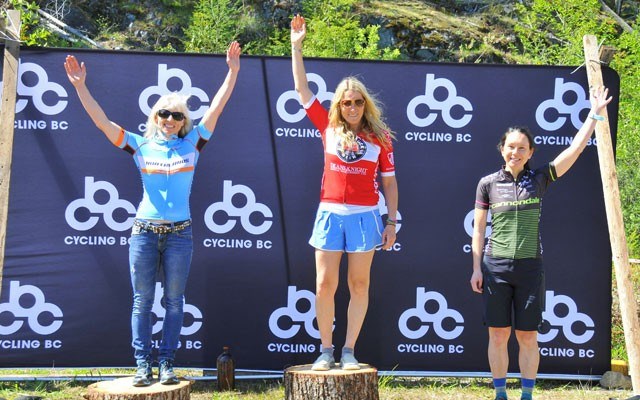 It doesn't matter what kind of bike, Cathy Zeglinski is happy to ride it.

This past weekend, she was on her cross-country ride, pacing her way to a second-place showing in the Sunshine Coaster elite women's marathon category in West Sechelt on April 30.

Zeglinski finished six minutes and 19 seconds (6:19) back of winner Brandi Heisterman at the race while crossing the finish line nearly eight minutes ahead of Amanda Sin of North Vancouver.

Essentially riding alone from the initial climb, Zeglinski enjoyed the course's twists and turns as she sought to keep pace with Heisterman.

"From the point at the end of the climb, I ended up riding pretty much solo, and I caught some men along the way," she said. "The climb separated people hugely and then it went into technical single-track and then it went into more climbing. A big amount of climbing on this course really suited me, along with the technical (elements) because I was able to hold my position. At about an hour, I was right behind Brandi and then I lost sight of her."

Other Whistlerites hitting the podium included Brent Murdoch, who was third in the 40-plus men short course and Mila Wittenberg, who was victorious in the under-17 women's short course division. As well, Julia Long (short course junior women) and Conrad Murdoch (short course men's 19 to 29) won as the lone competitors in their category. Full results are online at www.sunshinecoaster.net.

Zeglinski trained as much as she could outside of Whistler this winter, putting in 10 to 15 hours a week since the end of January. However, she also commuted to work in town on her fatbike, lovingly dubbed Big Ed.

"I had a love affair with Big Ed this winter," she said. "I know a lot of people saw me because it's a big orange bike. It's very flashy. I rode my fatbike to work commuting all winter and I think that kept my cycling fitness through the winter even though it's ski season so that's a cool thing."

With several events happening outside of the summer prime to allow more of a focus for the major stage races, riders must be prepared to hit the ground running coming out of winter with events pushing earlier into the spring, Zeglinski noted.

The former UCI masters world champion will be doing a major stage race this summer as well, heading to France to do it. At the inaugural Alps Epic, Zeglinski will be joined by Brackendale's Jean-Sebastian Lareau, who won the men's 40-plus division on the weekend.

"We're going to be ambassadors for the race and we'll be the first people in the real race so we're training for that. That's our big goal," Zeglinski said of the July race. "It's high alpine... To put in the miles to do these multiday stage races, you have to have a lot of big miles in your legs or else you kind of blow up. These kinds of goals are what keeps everybody motivated because you're going to something big and you'd better be ready."

The rest of the season is still undecided, though Zeglinski said she's interested in tackling some enduro races.

Zeglinski, a former road rider, also has been involved with the Whistler BMX Club project, which is currently under construction at Bayly Park in Cheakamus Crossing, as the fundraising director. She said the group's hope is to have the BMX track and the pump track ready in about a month, but the timeline depends on those who have offered in-kind donations fulfilling the commitments.

"We need, as much as we can, people stepping up and saying 'I'll do my three hours,'" she said.