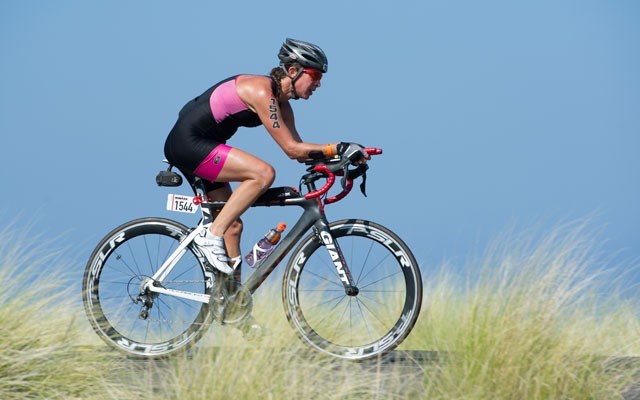 HAWAII SIX-OH Marla Zucht is shown competing in the Ironman World Championships in Hawaii, where she placed 60th in her division. Photo by David Mccolm

Marla Zucht's road to the Ironman World Championships in Kailua-Kona, Hawaii had more twists and turns than several of the other competitors.

But she made the most of it once she was there.

Reached by email in Hawaii, Zucht explained the race lived up to its challenging reputation.

"The race was tough. The saltwater started chafing my body early into the race; the head and cross winds on the bike particularly in the lava fields are like nothing I have ever experienced before — at one point on the ride I was blown from the middle of the traffic lane to the far right side of the rumble strip making me tentative and less steady than I would have liked riding in my aero bars; and the heat on the marathon was exhausting," she explained. "But when it got tough on the course — and it definitely did after two hours of frustrating headwinds on the bike and three hours of energy-zapping heat on the marathon — despite the pain and exhaustion I just kept reminding myself how amazing it was to simply to be out there and so inspiring to look around me at the awesome racers and supporters on the course, including my incredible family, partner and friends in Kona and friends following the race online.

"I saw a beautiful sunset over the Pacific Ocean before crossing the finish line and I was filled with happiness and gratitude for having had what may be a once-in-a-lifetime opportunity to have raced the World Championships in Kona."

Zucht was not initially slated to go across the ocean to compete after placing fourth in her age group at the Subaru Ironman Canada race held here in Whistler in July, but after Squamish's Julie Miller was disqualified, she received the opportunity to go. When Zucht received word she was going to go over in late August, she told Pique that she had kept up her fitness after hearing there might be a possibility she would receive the spot.

Zucht expressed appreciation for all that went into making the race go off.

"I cannot begin to put into words how honoured I am to have had the opportunity to race in Kona amongst the best Ironman and Ironwoman of the world. It is truly a humbling experience and one that I know I will never forget. The entire week of events leading up to the race and the race on Saturday are incredibly impressive, inspirational and nothing short of phenomenal. From the 5,000 volunteers assisting the 2,300 athletes (27 per cent of the field is female), the incredibly well-organized race support system, the announcers, the aid stations, the spectators' support — it all surpasses what one could even begin to hope for from a race."

As for the pros, Germany's Jan Frodeno captured the win in a time of 8:14:40 to best countryman Andreas Raelert by 3:03 and American Tim O'Donnell by 4:10. Defending champion Sebastian Kienle, also of Germany, took eighth place.

"I'm sorry to take it from an American again," Frodeno told the Ironman website at the finish line. "I'm glad Tim did not have any garlic last night, he was breathing down my neck. I am just over the world."

Frodeno was the 2008 Olympic gold medallist and earlier this year, took the Ironman 70.3 World Championship in Austria in August.

As for the pro women, Switzerland's Daniela Ryf emerged as the champion in a relative blowout, besting Great Britain's Rachel Joyce by 13:02. Ryf, who won the Ironman 70.3 World Championships in both 2014 and 2015, won her first Ironman World Championship with a time of 8:57:57. Australian Liz Blatchford placed third with a 9:14:42 result.

"I had almost the perfect race. In Ironman that doesn't happen often," Ryf told the Ironman website.

Defending champion Mirinda Carfrae of Australia pulled out of the race midway through. She posted to her Twitter page that her back started seizing up and that she had suffered a "minor crash" on her bike during training earlier in the week.