A death that becomes us 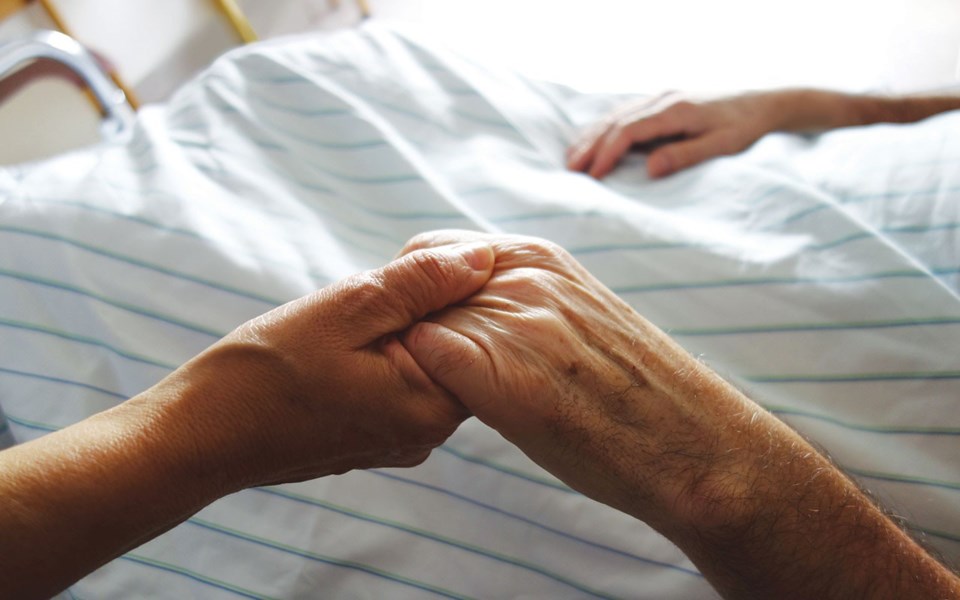 "Death don't have no mercy in this land."

So you're a reasonably robust Whistleratic. You ski, bike, surf, run, do any number of things that make you feel vibrant, alive. You live life pretty much the way you want to live it and you're just fine with that, thank you.

But what about death?

Not really. It is, after all, inevitable. As I replied once to a colleague who'd asked me what the death rate was in Toronto, "One per person." No one gets out of here alive.

So why would you, given a choice, not want to make your final experience as graceful and stylish as the rest of your life? Given that choice, I'd rather go as several people I know have, with my ski boots on, about to après after a spirited top to bottom, non-stop run on a stunning day.

But it often doesn't work that way. What I'd like to avoid, given the choice, is wasting away with what's left of my mind silently screaming for someone to slip the black capsule into my mouth. My own representation agreement informs my attorney to pull the plug if the medics believe the best likely outcome is only being able to ski green runs. Blue? I'll stick around for that.

Because of this aversion to lingering death—something I've personally witnessed several times—I was buoyant when the Supreme Court of Canada handed down a unanimous decision in 2015 striking down the provisions of the Criminal Code that made it a crime for physicians to give death a helping hand. The Court recognized an individual's right to end-of-life assistance if suffering from "... a grievous and irremediable medical condition that causes enduring suffering that is intolerable to the individual..."

The Court gave Parliament one year to craft legislation making medical assistance in dying (MAID) legal. Not disappointing any of the bookmakers, Parliament punted. What eventually came out of the sausage maker was a watered-down version of what the Court had in mind. Seven words did violence to the intent of the Court: competent adults whose deaths are reasonably foreseeable.

Uncomfortable stories about people who wanted to end their "enduring suffering" but failed in one way or another to either show their competence or prove their deaths were reasonably foreseeable have brought us to where we are today. Well, that and a court challenge playing out in Quebec.

Where we are today is in the middle of government consultations designed to modify current legislation. In September, the Quebec Superior Court struck down the wording in the current law limiting access to MAID for terminally ill people whose natural deaths were not reasonably foreseeable, that is, people who might linger in their terminal illness for an indefinite period of time, possibly years.

The federal ministers of Justice and Health—not the same ones responsible for the original tepid legislation—want to know what you think about access to MAID, specifically under three scenarios: If you're a mature minor, not yet 18 years of age; if you've made a request for MAID in advance but have reached a state where you cannot express consent just before the moment of administration; and, if your sole underlying medical condition is a mental disorder as opposed to a terminal illness.

They've already think-tanked these issues and if you have a lot of time and patience to read through several hundred pages of findings by an exhaustive expert panel, here's a link: cca-reports.ca/reports/medical-assistance-in-dying.

If this is an issue near and dear to you, as it should be unless you're comfortable living out your remaining days in a vegetative or near vegetative state, you can let your views be known by completing a survey. Here's another link: justice.survey-sondage.ca/f/s.aspx?s=6E6210A5-E100-4201-A55D-CFB52ADA1C0C.

I still have trouble figuring out why choosing to end your life through the administration of a medical procedure is so fraught with red tape, but it is. Ironically, ending your life is perfectly legal. I prefer to not use the word suicide because it comes with too much social and religious baggage. A better euphemism is needed. That it is not illegal to end your life was, in fact, the first step towards MAID. It used to be illegal to do so notwithstanding the absurdity of charging a dead person with the crime of bringing about their own death.

In the world I live in this makes no sense. If life has become unbearable why shouldn't I be able to end it in a relatively painless—not to mention tidy—way? Why should I be forced to leave a mess and inflict undue trauma on whomever stumbles across what's left of me? Why is death still so stigmatized and scary when it's waiting down the road for each and every one of us?

I appreciate the legislative safeguards that need to be put into place to protect doctors in the case of people who have expressed a desire for MAID but are reluctant to hasten their departure, preferring to wait until, oops, they're no longer capable of saying, "Now's the time."

No doctor in her right mind wants to run the risk or face the potential liability and litigation from a distraught family member who just can't accept Uncle Charlie's death. But such is the apprehension and fear inherent in the final step that it's just a step too big for many people. While it amounts to a request to "end my life when I'm no longer capable of telling you to end my life," surely it abides by the expressed wish of the individual to not linger in an incompetent state. This is not an insurmountable obstacle.

Nor should the fact that death is not imminent be a barrier. Requiring this summit to be reached is a heartless way of telling someone they haven't suffered enough.

Wanting to die is not a sign of mental illness. It's a personal decision. Getting assistance to end life in a humane way is, well, humane. We demand it for our loved pets because it is inhumane to let them suffer. Weird we can't manage that for our loved humans or ourselves.