A survey of the election landscape 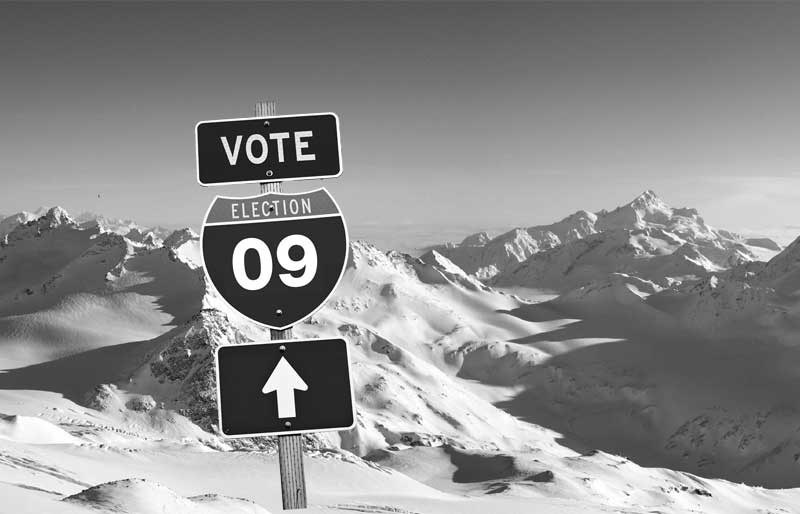 OMG! There's an election going on. How'd this get past me? Okay, admittedly I was in a bit of a Festival haze, work haze, normal everydaze haze. But I swear, I thought those ugly signs cropping up along the road were either telling me I was about to encounter endless highway delays - second only to the sight and smell of skunk cabbage as a harbinger of spring - or were just more tasteless Olympic detritus. An election? Go figure.

We're having a provincial election because... oh, really? Because Rear-Entry Campbell fixed the election date and it's had the bad manners to roll around right in the middle of a recession? Wow. What were the chances of that happening? Bet he wishes he could cancel that decision as easily as he cancelled last autumn's session of the legislature.

For those of you as tuned out and uninterested in this election as I seem to be, let me survey the landscape. Gordo's leading the Liberal Party. Check. Carole James is leading the New Democratic Party. Check. The Green Party is... wow, running candidates in all 85 ridings, apparently including the one we live in. Way to go... Jane Sterk? Who apparently leads the Greenies.

The Marijuana Party, the Sex Party, the Work Less Party are all somewhere in the race. Believe it or not though, they're not all the same party. Personally, I think they're missing the boat here. Obviously, as fringe parties, they'll draw a couple of votes each, assuming their supporters don't space out the election date, aren't busy boinking or aren't off on vacation or whatever they do when they're working less. But as a united party, say the Lifestyle party, I'm imagining they've got a pretty attractive philosophy to offer. How many of us wouldn't prefer to get stoned, have sex and work less? Heck, sounds like the holy trinity that's been informing the lives of most of the people I know who seem to really be enjoying themselves these days.

But back to the election. The parties all have platforms. What are they? Glad you asked. The Liberal Party's platform is best summed up by their slogan, "What you see is what you get... plus a whole bunch of (your) money we're spending to buy your vote... because we can."

The NDP's platform is, as befits a formerly-disgraced opposition party, more nuanced, nuanced being a euphemism for incomprehensible. Reduced to its philosophically-bereft essence, the party's platform seems to have been borrowed from a song Groucho Marx sang in the movie, Horse Feathers. If I close my eyes and picture her in a greasepaint moustache, I can almost hear Carole James sing "Whatever It Is, I'm Against It."

"I don't know what they have to say,

It makes no difference anyway -

Whatever it is, I'm against it!

No matter what it is or who commenced it,

For those of you unfamiliar with the song and/or the film, you can catch Groucho's performance via YouTube: youtube.com/watch?v=DtMV44yoXZ0. It's way more fun than actually listening to Ms. James and probably more politically enlightening.

The Green Party has a platform too. It's contained in the Green Book. I tried to read it, even though the second of their six Core Beliefs is that meaningless chestnut, sustainability. Unfortunately I didn't get very far before I found myself running afoul of their sixth core belief - nonviolence. So full of meaningless platitudes it was that I was shocked, shocked they had somehow overlooked motherhood and peace through whole grains. Not surprisingly, the first core belief is a transparently-cloaked "participatory democracy," meaning, presumably, some form of proportional representation. But more about that later.

The biggest single issue for the Liberal Party is moral turpitude or the carbon tax, depending on where you live in the province. If you live with one foot in the Lower Mainland and the other firmly in your own navel, it's the shockingly criminal conduct of John Van Dongen, former Liberal solicitor-general. If you live anywhere in B.C.'s wide open spaces, it's the carbon tax.

Now, there are several dozen omissions and commissions VD has omitted or committed that I believe are grounds for dismissal. Pretending that getting tough on crime will have any real effect on it, failing to prosecute the RCMP officers who murdered Robert Dziekanski and not even thinking of prosecuting the Crown Attorneys who allegedly watched the video of that event, read the RCMP officers' statements of what happened and decided the former supported the latter are three of the several dozen that come immediately to mind.

But noooooo. He loses his job over speeding tickets. Oh the moral turpitude. And get this, Two-Martini Campbell, accepting the resignation and saying he'll now screen the driving records of future solicitors-general, has the incredible bad taste to say, "I think it is important for the s-g to set an example. I think it's important for all of us to try to do that." When Mr. Mug-Shot can say that with a straight face, I'm more convinced than ever the Firesign Theater are running things. For those of you completely unfamiliar with Firesign Theater, punch 'em into YouTube and have fun. Hint: You might try imbibing in a bit of the main plank of the Marijuana Party's platform first.

For mind-boggling, we-must-be-deep-into-election-territory weirdness though, nothing the Liberals can come up with tops Carole James's totally bizarre refutation of the carbon tax. If you asked the stupidest person in B.C. - or for that matter the stupidest person in Canada - who actually knew the NDP was a political party, what they stood for, even that incredibly stupid person would eventually mumble something about the environment. True, they may mumble something about unions, fast ferries, Bingogate and Glen Clark's deck first, but sooner or later, they'd remember there was, once upon a time, a link between B.C.'s NDP and the environment.

But Carole's against it. Op. cit. Groucho Marx. Even David Suzuki's wondering if she has her head up her arse.

Frankly, I'm tired of voting for the lesser evil. Especially when the available evils are so, well, evil. The only thing worth voting for in this election is the Single Transferable Vote, B.C.'s first-step attempt to abolish the first-past-the-post election system. It ain't great but it is a start.

Hey, it's one of the Greenies' planks too. Hmmmm.