Act I C hristmas in Whistler: A child's perspective Have a holly, jolly Christmas, it's the best time of the year.... If you're a child growing up in Whistler, Christmas is just like Christmas everywhere.
Dec 21, 2016 5:00 PM By: G.D. Maxwell 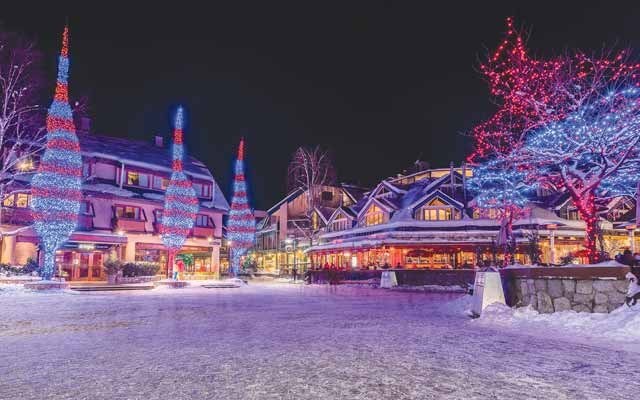 Christmas in Whistler: A child's perspective

Have a holly, jolly Christmas, it's the best time of the year....

If you're a child growing up in Whistler, Christmas is just like Christmas everywhere. Toys, wrapping paper, empty boxes to play in, small pieces of stuff to choke on, more cookies than usually share the house with you, arguments with siblings, assuming you have any. And if you're lucky, grandparents who visit to spoil you so much you can forgive them for thinking pyjamas are appropriate Christmas presents.

If you're still very young and blissfully naive, your parents schlep you off to visit Santa for the first time. Or Santa's helper if you've gotten to the age where you begin to wonder how Santa's going to get everything done if he wastes his time in Whistler when the world is so big. They expect you to crawl up on this fat, bearded stranger's lap, tell him what you want for Christmas and get your picture taken while you wonder how someone so fat can have such bony knees. It's the kind of early-life experience that explains why a significant portion of the adult population spends time on a psychiatrist's couch.

But, when you get a little older, you do what kids everywhere in the civilized world do — celebrate the Christmas school break! And like kids everywhere, you celebrate by going skiing every day. What do you mean kids everywhere don't spend Christmas break skiing? What's the matter with them? If they don't do that, what do they do? And why do you keep calling this place I'm growing up in a bubble?

Joy to the world, the crowds have come....

Only because you're you, and I know you'll understand, I'll share this with you. If you're visiting, I don't want you to feel guilty about this; it's just our reality. We're cool with it.

Whistler never stops. And at Christmas, it particularly never stops. In fact, it hits warp speed. It's as if the hand of Ullr, or God, or whatever power you believe in waves a magic wand and 50,000 very demanding, very stressed people suddenly appear before us... expecting us to make their beds, fix their meals, take care of their children, engineer perfect weather and make them better skiers than they are anywhere but in their fantasies.

Phrases such as "days off" suddenly disappear and we find ourselves rolling into work in the dark, heading home 10 hours later in the dark and spending the hours in between caught in a world the only accurate metaphor for which can be found in nature. That metaphor, and I know you can all picture it, is captured perfectly if you visualize a nest full of baby birds, all chirping madly, all with their mouths wide open, all expecting you to puke partially digested insects down their throats. OK, they really only expect you to make their holiday perfect. But after a few days, a few weeks, a few years and, yes, a few decades of doing that, the distinction between making their holiday perfect and puking bugs gets a little bit blurred.

Yet, no matter how bizarre the request, you find yourself rising to the occasion and doing the nearly impossible. And so it was, one year while working the reservation centre phones, I was asked if I could arrange a three-metre tall, Martha Stewart-decorated Christmas tree for someone's holiday home. The answer was, "Of course I can." Unfortunately this was followed by a request to find a Mariachi band to set the stage for a marriage proposal. "Ah, that might be a little difficult," I responded. This, of course, was long before there were enough people living in town who called Mexico home to even imagine such a thing might be possible. "But I can lend you a Flaco Jimanez CD if that would help."

I'll be home for Christmas, you can count on me....

A number of years ago, my aging parents wondered if I would ever spend Christmas with them again. Naturally, they wielded the most powerful force in the parental toolbox — guilt. So I agreed. I mean, how hard could it be to get a little time off at Christmas? Just this once?

You never know until you ask.

"I'd like to have a week off at Christmas this year."

"No one gets to take time off at Christmas."

"That's not entirely true. Didn't you get time off at Christmas a year or two ago?"

"How was that different?"

"It was me. I'm senior management."

"OK. But I need a week off at Christmas."

"I haven't spent Christmas with my folks in 15 years, coincidentally, the same number of years I've been working for you... at Christmas."

"Yeah, yeah, I know... time off at Christmas. Look, this company has a policy on bereavement leave doesn't it?"

"Of course. We're compassionate. We care. Your concerns are our concerns."

"OK, so consider it an advance on bereavement leave."

"But your parents are still alive, you just said so."

"I'll make sure they die during the off-season."

"You can't have Christmas off."

"OK, I'm taking the whole season off. See you next year... or not. Your choice."

You never know until you ask, er, go.

Christmas in Whistler: Oh my god, I'm not scheduled to work Christmas day!

The very few years I wasn't scheduled to work Christmas day were, well, wonderful. That's because Christmas in Whistler, Christmas Day in Whistler is best spent doing what we live here to do, line up early, ski deep snow — after all, Christmas day is almost always a powder day — and share the slopes with friends... while the tourists shake themselves awake and open presents.

Between the first gondy and, oh, 10:30 a.m. or 11 o'clock, the runs are empty, the powder perfect, the camaraderie festive, the chairlifts lubricated with seasonally appropriate cheer, and just for those couple of hours, it seems more like early December than Christmas.

It is not uncommon for the skiing to be soooo good, the runs to be soooo unpopulated and the warm friendships to be soooo gratifying that leaving becomes, well, difficult. And that's why eating Christmas dinner in Whistler at, say, 10 p.m. is not an uncommon tradition.

And that is the best possible Christmas in Whistler... except the one you're having, of course.