MAXED OUT: An age-old debate for today 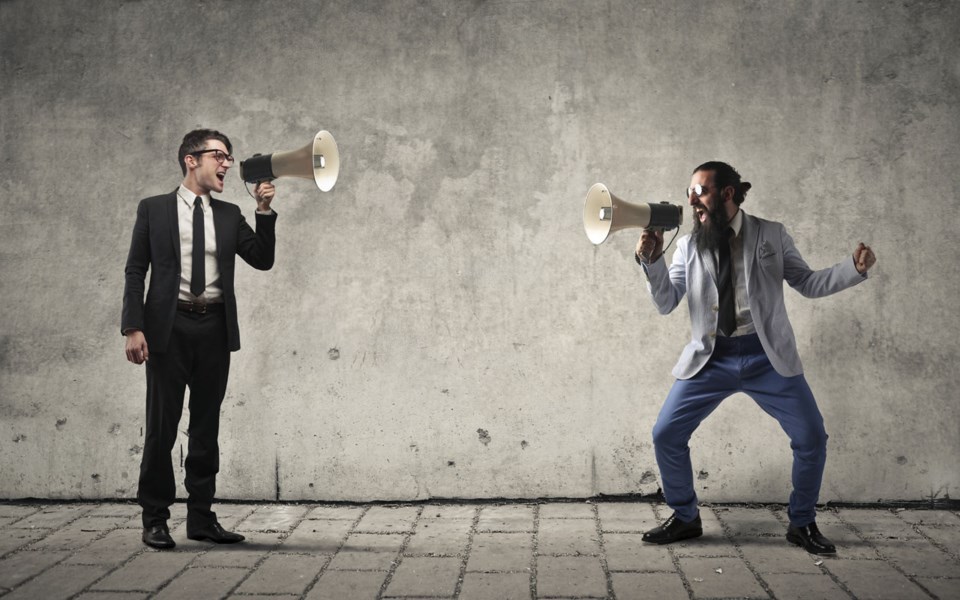 ... and so, with the dreaded virus having reached the ultimate seat of power, the capital of the free world, the highest office in the land, we can only hope...

“What you’re about to write.”

How do you know what I’m about to write... and who the heck are you?

“I’m the Angel of Your Better Conscience.”

“The voice inside your head.”

You’re going to have to be more specific. There are lots of voices in my head at any given moment, all clamouring to be heard over this damn tinnitus.

“I’m the voice of humanity. Your better angel.”

Yer joking. Never heard of you.

“I try to stay under the radar. Besides, you generally do the right thing, the humane thing, the morally correct thing.”

Hey, don’t let that get around. I have a reputation to keep up.

“Regardless, you can’t write what you’re about to write. It’s morally wrong.”

You sure you’re not my editor?

Whoa, who the heck is that?

“I’m the Angel of Your Darkness.”

OK, this is getting spooky. Am I dreaming? Does this have anything to do with that mushroom I ate last night, the one I’m pretty sure was a pine mushroom? Angels? Darkness? Conscience?

“You know me. You were about to let me have my way when goody two-shoes popped up. Go on. Write it. You know you want to. You know it’s what you want to happen. You know he deserves it.”

“Don’t listen to him. He’s evil. Angel? My aunt Fanny’s behind. Fallen angel is more like it.”

“Sticks and stones. Whatever. It’s voices like you that keep shrinks in business. You just can’t abide letting someone give vent to dark thoughts, regardless how sorely they’re deserved.

“Don’t listen to him. You know life is precious. You can’t wish it to end for anyone.”

“Oh, sweet Jesus. Next you’re going to break into an angelic rendition of ‘Every Sperm is Sacred.’ I’m going to throw up.”

“Every life is precious. Any person’s death diminishes mankind. You can’t wish for anyone’s death.”

“This is evil on Earth, if someone deserved that fate, this is it. He’s a poster child for inhumanity. He’s lied, cheated and caused countless deaths during his life. His death would be lifting mankind one small step out of the quagmire it’s been in since the first ape walked erect.”

“I don’t deny his Dark Angel has been a guiding force in his life. But writing what you were about to write would bring you down to his level and hand him the victory he has always strived to achieve. There’s no doubt he has debased the norms of public behaviour and wrecked havoc on moral expectations. But what you were about to write would vindicate everything he believes in.”

“So according to you, everyone should wish the monsters of the world a nice day. Turn the other cheek and toss in a blind eye for good measure. Let the evil ones take the day and wait for the ultimate judgment to balance the scales. What tripe.”

“And I suppose you were the one who put that idea into his head about starting a GoFundMe page to hasten regime change.”

“Who else. I still think it was a good idea. Woulda raised enough to get the job done and pay down half the national debt.”

That was your idea? I thought it was mine.

“Of course it was my idea. I still can’t believe your old editor wouldn’t run with it.”

Cut him some slack. He still lived down there. NSA woulda been breaking down his door if he published that. At least now he’s safe in New Zealand.

“I told you that was an evil idea.”

Listen, if the two of you would like to argue this out, fine with me. It’s not helping me meet my deadline. I’m going to get another cup of coffee. You two have at it.

“So, prissy, why shouldn’t people root for the Grim Reaper? And don’t give me more of that ‘every life is precious’ nonsense. He sure doesn’t believe it. Every decision he’s made in life proves he doesn’t give a damn about anyone but himself and will go out of his way to screw anyone if there’s a penny of profit in it for himself.”

“Death doesn’t kill an idea. Especially an evil idea. Evil people will die just like everyone else. Wishing them dead gives them an air of immortality they neither possess nor deserve. The best way to counter them is to defeat their ideas. Judgment will be passed on this one in a month’s time.”

“And suppose his brand of evil isn’t defeated? How many more people will die because he’s too arrogant, too self-centred, too ungrateful to even begin to realize the damage he’s caused and the damage he will cause doubling down on his, ‘Oh, COVID-19 isn’t so bad.’ Yeah, maybe not when you have a team of top doctors working 24/7 treating only you, with drugs unavailable—and ill advise —to everyone else... especially those whose healthcare coverage you’re so hellbent on taking away. The man has no humanity and the world would be better off without him.”

“Kumbaya, dude. Let’s all join hands and sing together.”

You guys still arguing? I’d really like to get back to work, if you don’t mind.

“Yeah, get back to it. Write the words.”

I can’t do anything ‘til you two get the heck out of my head and let me work this out for myself. Shoo!