MAXED OUT: Watching an empire crumble… 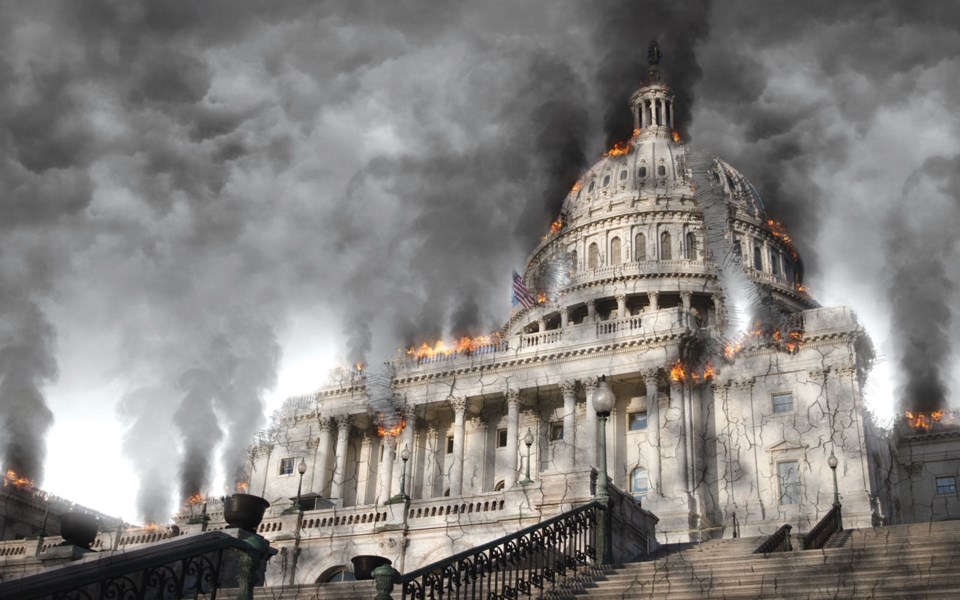 “Little boys dig tunnels
Into the ground they go.
Hundreds of them, disappear
Little soldiers on patrol.

Singing, don’t want, don’t want
Don’t want to be part of your world.”

The past two weeks have been trips down different rabbit holes. One was full of light and hope. One was dark and scary. Neither was a completely accurate representation of what the future might hold when our neighbours to the south choose one over the other, but they did represent startlingly different versions of reality.

At some point during the Republican National Convention, a Never Trump commentator said, “If Trump is re-elected, you won’t recognize the country in four more years.”

That’s about the time those lyrics from David Byrne’s Rei Momo album began to play in the jukebox in my brain. I don’t want to be part of that world. And frankly, as far as not recognizing the US of A, that ship sailed long ago.

The worse thing that could be said about the U.S. when I left it in 1979 was it was about to elect Ronald Reagan. The best was that disco was on life support. Both were harbingers of the death spiral to follow, culminating in what we see now if we can bear to peek in on what’s going on down there.

Cadet Bonespurs has lived down to the worst expectations anyone had of him. Until the pandemic rolled into town, the best anyone could say about him—with the exception of his rock-solid core supporters—was that he’d “managed,” a word used advisedly, the economy well. This accolade was based solely on the performance of the stock market, managing to hit new highs until it fell off a cliff near the end of February.

But as a metric of success, the S&P 500 is thin gruel. It is a tide that raises few boats—those large yachts owned by the One Per Cent of the One Per Cent for the most part. Between all wealth seemingly being measured by the stock index and the redistribution of wealth represented by the Cadet’s tax breaks favouring the wealthiest, most Americans, whether they were Trump supporters or haters, took it up the hind side. Wages still stagnated, jobs still disappeared, more people slid toward or into poverty, bankruptcy, homelessness.

But at least they had someone to hate, which, when you’re down and out, is strangely comforting. The anti-Trumpers hated Trump. The Trump supporters seemed to pretty much hate everybody. And the Cadet stirred that hatred and stirs it still, more rapidly and more frothy than ever.

Daily, he churns hatred for anyone who disagrees with him or dares to present facts, also known as alternative facts since he disagrees with them, that cast him in a bad light, going so far to ascribe that outcome as their sole purpose in presenting them in the first place. The centre of the Cadet’s universe is himself, naturally, although that centre may well be a black hole.

He encourages hatred for the country’s closest and most longstanding allies, impugning their motives, claiming they’re screwing America, chastising them for slights perceptible only to him. At the same time, he embraces the strongman dictators of the world, envious, perhaps, of their ability to rule by fiat, fear and murder.

In a well-oiled feedback loop, his hatred stirs up both his base and those on the extremes opposed to him, leading to the inevitable clashes that ended in yet another death this week, this time to one of his supporters in Portland. The violence is his manna.

In a more sane time, in a more sane version of the U.S., the Cadet’s handling of the ongoing pandemic would have been the death knell of his presidency. Uncharacteristically, there is no jingoistic cry echoing across the country of, “We’re No. 1! We’re No. 1! USA! USA!” in response to the news the U.S. has won gold in the number of COVID cases and death toll, topping every other country in the world... and not because of its excellent and widespread testing protocol.

From dismissing it outright, to saying it would magically go away when the weather warmed, to advocating ineffective drugs and even more ineffective intake of disinfectants, to blaming it all on Democrats, the World Health Organization, the Centers for Disease Control to, of course, China, the administration’s handling of the pandemic has been criminally negligent.

But the trauma continues. While it would be an overstatement to say the election in November is an even bet, it would be ill advised to rule out four more years of a whole new ring of Hell.

A far different reality was spread across the landscape during the Democratic National Convention. Never has reasonableness seemed so foreign. While rife with propaganda, sloganeering and its own form of jingoism, the version of the future dished up by Biden & Co. was more like Alice taking tea with the Mad Hatter and his friends than Trump’s version that hewed closer to the Queen of Hearts’ croquet game.

But if, in fact, the collective we, get the government we deserve, whatever happens in November will be what the people of the U.S. deserve. Just as they, or at least enough of them to tilt the pinball game known as the Electoral College, chose the path of increasing tribalism, polarization, indignation, hatred and anger four years ago, they might choose tea or croquet this time around.

It’s hard to call because it’s hard to understand what has turned the country once thought of as the bastion of freedom, St. Reagan’s shining city up on a hill, into a land of violence, oppression, police lynchings, even greater xenophobia, racism and anti-intellectual thought. After all, it was less than 50 years ago members of both political parties, having due regard for the oath of office they took, came together to rid the country of a president who failed to uphold his own oath to protect and defend the Constitution. The blind pursuit of power—worthy of the most ripe of banana republics—has made such an alliance impossible.

When the only interest worth pursuing is self-interest, the decline of the empire can’t be far off.